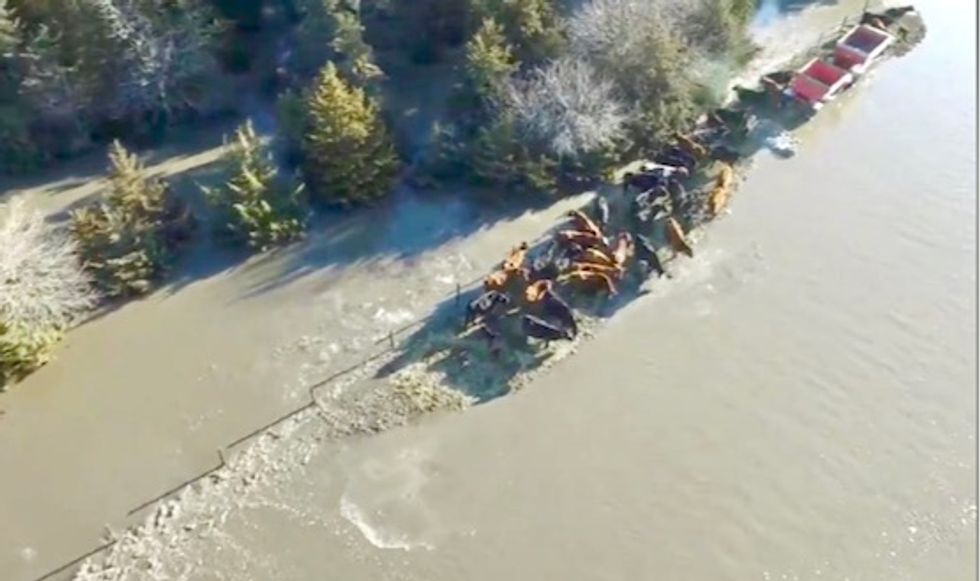 Midwestern farmers have been gambling they could ride out the U.S.-China trade war by storing their corn and soybeans anywhere they could - in bins, plastic tubes, in barns or even outside.

Now, the unthinkable has happened. Record floods have devastated a wide swath of the Farm Belt across Iowa, Nebraska, South Dakota and several other states. Early estimates of lost crops and livestock are approaching $1 billion in Nebraska alone. With more flooding expected, damages are expected to climb much higher for the region.

As river levels rose, spilling over levees and swallowing up townships, farmers watched helplessly as the waters consumed not only their fields, but their stockpiles of grain, the one thing that can stand between them and financial ruin.

“I’ve never seen anything like this in my life,” said Tom Geisler, a farmer in Winslow, Nebraska, who said he lost two full storage bins of corn. “We had been depending on the income from our livestock, but now all of our feed is gone, so that is going to be even more difficult. We haven’t been making any money from our grain farming because of trade issues and low prices.”

The pain does not end there. As the waters began to recede in parts of Nebraska, the damage to the rural roads, bridges and rail lines was just beginning to emerge. This infrastructure is critical for the U.S. agricultural sector to move products from farms to processing plants and shipping hubs.

The damage to roads means it will be harder for trucks to deliver seed to farmers for the coming planting season, but in some areas, the flooding on fields will render them all-but-impossible to use.

The deluge is the latest blow for the Farm Belt, which has faced several crises in the last five years, as farm incomes have fallen by more than 50 percent due to a global grain glut. President Donald Trump’s trade policies cut off exports of soybeans and other products, making the situation worse.

Soybeans were the single most valuable U.S. agricultural export crop and until the trade war, China bought $12 billion worth a year from American farmers. But Chinese tariffs have almost halted the trade, leaving farmers with crops they are struggling to sell for a profit.

As prices plummeted last year amid the ongoing trade fight, growers, faced with selling crops at a loss, stuffed a historic volume of grain into winding plastic tubes and steel bins. Some cash-strapped families piled crops inside their barns or outside on the ground.

Farmers say they are now finding storage bags torn and bins burst open, grain washed away or contaminated. Jeff Jorgenson, a farmer and regional director for the Iowa Soybean Association, said he has seen at least a dozen bins that burst after grains swelled when they became wet.

Under U.S. Food and Drug Administration policy, flood-soaked grain is considered adulterated and must be destroyed, according to Iowa State University.

Some farmers had been waiting for corn prices to rise just 10 cents a bushel more before making sales, which would earn them a few extra thousand dollars, Jorgenson said.

“That’s the toughest pill to swallow,” Jorgenson said. “This could end their career of farming and the legacy of the family farm.”

As of Dec. 1, producers in states with flooding - including South Dakota, Nebraska, Kansas, Minnesota, Iowa, Missouri, Wisconsin and Illinois - had 6.75 billion bushels of corn, soybeans and wheat stored on their farms - 38 percent of the total U.S. supplies available at that time, according to U.S. Department of Agriculture data.

Iowa suffered at least $150 million in damage to agricultural buildings and machinery, and 100,000 acres of farm land are under water, said Keely Coppess, a spokeswoman for the Iowa Department of Agriculture and Land Stewardship.

The record flooding has killed at least four people in the Midwest and left one person missing. The extent of damage is unknown as meteorologists expect more flooding in coming weeks.

“The water came so fast,” said John Hansen, president of the Nebraska Farmers Union. “We know our farmers didn’t have enough time to move all the cattle or empty all their grain bins.”

Multiple washouts and high water on BNSF Railway Co’s main lines have caused major disruption across parts of the Midwest, the company warned on its website. The flooding also has disrupted part of Hormel Foods Corp’s supply chain, the company told Reuters.

The roads are so bad that Nebraska’s National Guard on Wednesday will push hay out of a military helicopter to feed cattle in Colfax County stranded by floodwaters, Major General Daryl Bohac said. It is the first time in at least half a century that such an air drop has been conducted, he said.

Cattle carcasses have been found tangled in debris or rotting in trees, while tractors and other expensive machinery are stuck in mud, unable to be moved.

“We should have been getting into planting for next season, but now all of our equipment is flooded and it’s going to take at least three to four weeks to bring back that equipment into shape,” said Geisler, the farmer in Winslow, Nebraska.

(Reporting by P.J. Huffstutter and Tom Polansek in Chicago and Humeyra Pamuk in Winslow, Nebraska Additional reporting by Julie Ingwersen and Mark Weinraub in Chicago Editing by David Gaffen and Matthew Lewis)