Wells Fargo CEO gets grilled in Congress over its 'ongoing lawlessness' 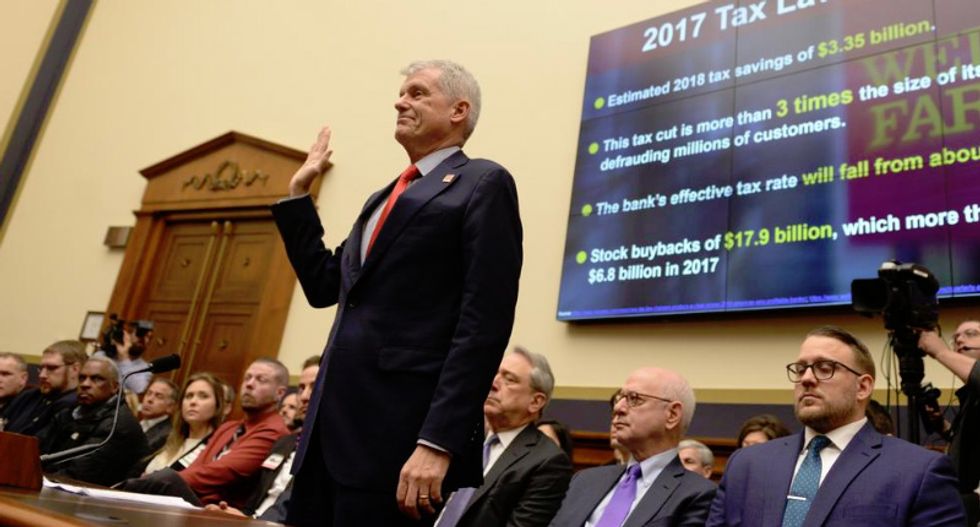 Democratic and Republican lawmakers pressed Wells Fargo & Co Chief Executive Tim Sloan for proof that the bank has moved past a string of customer abuse scandals at a tense hearing in Congress on Tuesday.

Sloan is the first bank executive to be grilled by the House Financial Services Committee since it was taken over by Democrats following the 2018 congressional election. A nervous Wall Street is keen to see how hostile the panel will be toward the industry.

The CEOs of Morgan Stanley, Goldman Sachs Group Inc, Citigroup Inc, JPMorgan Chase & Co and Bank of America Corp are expected to appear before the House panel next month.

The panel, led by bank critic Maxine Waters, has several freshmen Democrats who are likely to criticize Sloan later in the day, including Alexandria Ocasio-Cortez, a leading voice of her party’s progressive wing. Fellow rookie Katie Porter likewise built her campaign on bashing Wall Street.

During the first hour of the hearing on Tuesday, Democrats and Republicans alike took a tough line on Sloan, quizzing him on the bank’s remediation efforts, personnel changes, risk management controls, culture and whether it should be broken up.

“Wells Fargo’s ongoing lawlessness and the failure to right the ship, suggests the bank … is simply too big to manage,” she added.

The committee’s ranking Republican Patrick McHenry made it clear that his party would not go soft on the country’s fourth-largest U.S. bank as they sought evidence it had remedied customer abuses.

“This is an important hearing and you will hear bipartisan criticism of the actions you have taken and the failures that you have overseen under your watch,” he said.

Still, some Republican lawmakers acknowledged the bank’s efforts, with representative Sean Duffy saying that his colleagues had been too harsh on the CEO.

Stakes are high for 31-year Wells Fargo veteran Sloan, who was appointed CEO when John Stumpf retired soon after the sales practices scandal erupted in 2016.

At times on Tuesday Sloan expressed remorse over the bank’s abuse scandals, noting in particular he felt “terrible” that some servicemen and women had been harmed by faulty products.

The CEO has faced calls to step down from investors and politicians, including U.S. Senator Elizabeth Warren, a 2020 Democratic presidential contender.

Sloan’s prepared remarks emphasized changes the bank has made to culture, sales practices and risk management, as well as efforts to repay wronged customers.

“Wells Fargo is a better bank than it was three years ago, and we are working every day to become even better,” Sloan, 58, read from his prepared testimony.

The CEO seemed to struggle to persuade some skeptical lawmakers that the bank’s culture had changed amid repeated interruptions and aggressive, sometimes hectoring questioning from representatives including Brad Sherman, a Democrat.

Still, Sloan remained calm under questioning, though he appeared to frustrate some lawmakers by declining to disclose confidential information on the progress of some remediation efforts, and by failing to say categorically that Wells Fargo would never suffer another scandal.

Sloan firmly rebuffed claims by Waters that Wells Fargo should be broken up. He also said the bank had paid back all customers hit by improper mortgage rate-lock fees and gave a similar answer about auto insurance remediation.

If lawmakers are unhappy with what they hear, they could pressure the Federal Reserve to maintain restrictions imposed on the bank’s growth until governance and risk management improve.

Sloan has not appeared before Congress since a 2017 Senate hearing, where he clashed with lawmakers from both parties.

Wells Fargo has since deployed more lobbyists in Washington and launched a public relations offensive, but remains in politicians’ crosshairs.