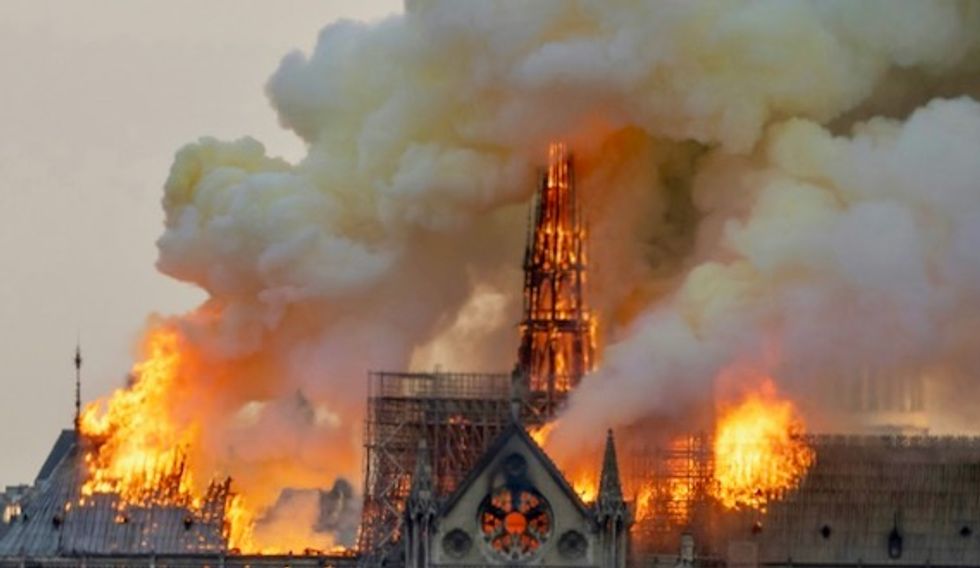 Right-wing conspiracy theorists pushed out Islamaphobic tweets and YouTube videos about the Notre-Dame de Paris fire as flames consumed the iconic cathedral, and faster than the sites could take down the hateful content.

French investigators have ruled out arson and terrorism, saying the fire appeared to be accidental and related to ongoing renovation at the cathedral, but that didn't stop anonymous and white nationalist accounts from immediately pinning blame on Muslims.

Journalist Talia Lavin reported for the Washington Post that conservative blogger Matt Walsh tweeted that a fire that large could not be accidental, and InfoWars immediately pushed unverified rumors the fire was an "anti-Christian attack" that was "deliberately" set.

Other conservative commentators -- including conspiracy theorist Mike Cernovich and debate enthusiast Ben Shapiro -- called the apparently accidental fire an attack on Western civilization and "Judeo-Christian heritage," and white nationalist Richard Spencer called for a race war in response to the blaze.

Phony accounts masquerading as CNN and Fox News also fanned the flames of Islamophobia, and directed some of that hate toward Muslim Rep. Ilhan Omar (D-MN), who had already been targeted for death threats and abuse from President Donald Trump's Twitter account.

Anonymous accounts used editing software to cook up bogus "evidence" linking Muslims to the Notre Dame fire on Twitter and YouTube, where the posts racked up tens of thousands of views, reported NBC News.

One of those videos, which was posted by an evidently white nationalist account, mixes video from the fire with audio of a man yelling “Allahu Akbar” ("God is great," in Arabic) from a years-old clip easily found in an online search, but the video still hasn't been taken down by YouTube.

That video racked up more than 40,000 views on YouTube and grabbed another 2,000 on Twitter before it was pulled from the microblogging service.

"If this was started by Islamists, I don't think you'll find out about it, because I think it would set the entire country on fire,” Beck said, and then compared the fire to the 9/11 terrorist attacks.

“They’re committed to getting more white people to white nationalism," she said, "and fanning the flames of Islamophobia is helpful."

Mainstream conservatives, as they showed this week, are all too happy to help them.