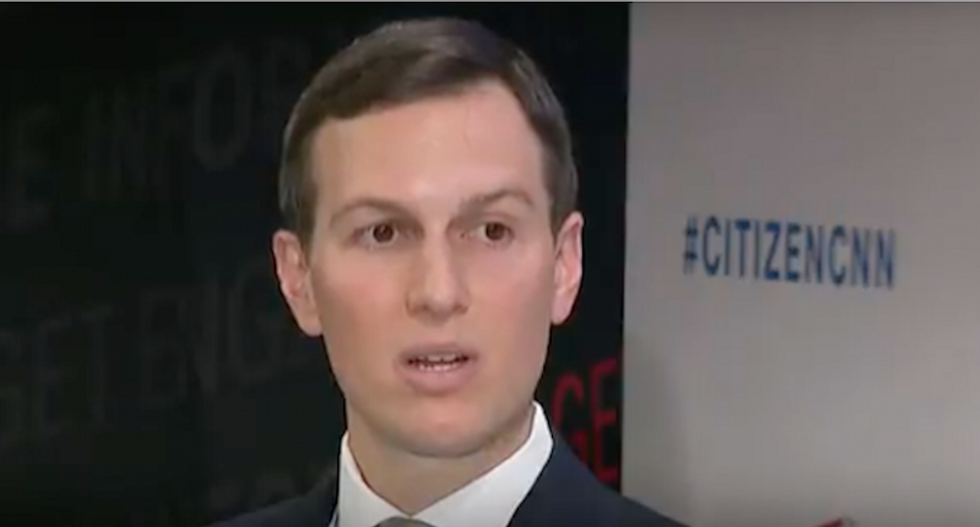 "The meeting lasted only a few minutes, during which Kislyak indicated that he wanted Kushner to meet someone who had a direct line to Putin: Sergey Gorkov, the head of the Russian-government-owned bank Vnesheconombank (VEB)," the report says on page 161. "Kushner agreed to meet with Gorkov. The one-on-one meeting took place the next day, December 13, 2016, at the Colony Capital building in Manhattan, where Kushner had previously scheduled meetings."

Mueller noted that the VEB was then and continues to be subject to Treasury Department sanctions imposed on Russia in wake of the annexation of Crimea.

"Kushner did not, however, recall any discussion during his meeting with Gorkov about the sanctions against VEB or sanctions more generally. Kushner stated in an interview that he did not engage in any preparation for the meeting and that no one in the Transition Team even did a Google search for Gorkov's name."

Gorkov gave Kushner two gifts, a painting and a bag of soil from the town in Belarus where Kushner's family originated. But the similarities between what Kushner and Gorkov testified about ends there. According to the Mueller report, the two men don't agree on whether it was a "diplomatic or business" meeting.

"Kushner told the Office that the meeting was diplomatic, with Gorkov expressing disappointment with U.S.-Russia relations under President Obama and hopes for improved relations with the incoming Administration," the report says. "According to Kushner, although Gorkov told Kushner a little bit about his bank and made some statements about the Russian economy, the two did not discuss Kushner's companies or private business dealings of any kind."

Mueller noted that during the time of the meeting, Kushner Companies had a debt due on 666 Fifth Avenue and there was public reporting that the Kushners were searching for a lender to borrow from and that any foreign investors would be a conflict of interest. Qatar admits it ‘unwittingly’ bailed out the Kushners.

"In contrast, in a 2017 public statement, VEB suggested Gorkov met with Kushner in Kushner' s capacity as CEO of Kushner Companies for the purpose of discussing business, rather than as part of a diplomatic effort. In particular, VEB characterized Gorkov's meeting with Kushner as part of a series of 'roadshow meetings' with 'representatives of major US banks and business circles,' which included 'negotiations' and discussion of the 'most promising business lines and sectors,'" the report continued.

Robert Foresman, the investment bank executive, told Mueller he met with Gorkov and the VEB deputy chair Nikolay Tsekhomsky in Moscow prior to the Kushner meeting.

"According to Foresman, Gorkov and Tsekhomsky told him that they were traveling to New York to discuss post-election issues with U.S. financial institutions, that their trip was sanctioned by Putin, and that they would be reporting back to Putin upon their return," the report went on.

According to Mueller, however, his investigation "didn't resolve the apparent conflict in the accounts of Kushner and Gorkov or determine whether the meeting was diplomatic in nature (as Kushner stated)."

It's still unknown what was actually discussed between Kushner and the Russian bankers. But a few days following the meeting, Gorkov's assistant texted Kushner's assistant (Berkowitz) saying, "Hi, please inform your side that the information about the meeting had a very positive response!"

Gorkov's assistant tried to set up another meeting with Kushner through Berkowitz, who didn't respond to the multiple text messages due to the press coverage about the Russia investigation. He never told Kushner about the additional meeting requests.