Many Texas teachers have second jobs or live paycheck to paycheck. They're watching the teacher pay debate anxiously. 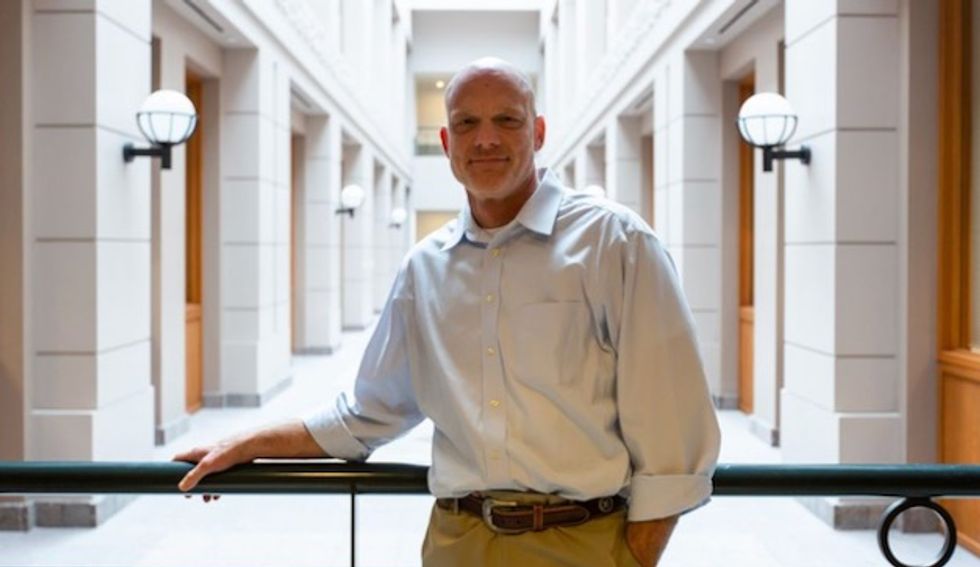 Houston teacher Brady Mayo moved back in with his parents while he was paying for his kids to attend college. He came to the Capitol in March to testify about the school finance bill. Emree Weaver

"I never anticipated that I would take a summer job at Wendy’s just so that I could replace a broken dishwasher,” said one high school English teacher who makes $45,000 per year.

When Jenifer Whitley-Lemke first became a teacher 25 years ago, she thought fast food jobs would remain in her past.

“I knew it would be difficult, but I never anticipated that I would take a summer job at Wendy’s just so that I could replace a broken dishwasher,” said Whitley-Lemke, who is 48 and teaches English to high school sophomores in Jacksonville.

With her annual teacher’s salary of $45,000 and a daughter in college, Whitley-Lemke has also tutored students and given piano lessons to avoid a negative bank account.

With stagnant salaries and and rising insurance costs, these numbers have been consistently increasing since the teachers association began surveying its members six years ago, said President Noel Candelaria. In 2016, 31 percent of the group’s members reported moonlighting during the school year and 49 percent reported moonlighting in the summer.

Now that the Legislature is working on a variety of school finance measures, struggling teachers are hoping for change. The Senate has passed a $5,000 across-the-board pay raise for teachers and librarians in the state, though that proposal’s future in the House is unclear.

Meanwhile, the lower chamber is expected to vote Wednesday on its version of comprehensive school finance reform. Teacher pay is likely to come up during the debate. As lawmakers negotiate, educators are watching anxiously.

The average teacher salary in Texas was roughly $53,000 for the 2017-2018 school year, according to the Texas Education Agency.

In bigger districts, teachers often earn more, as is the case for Brady Mayo, who teaches principles of business at Bellaire High School in Houston for $66,000 per year. But it’s still not enough for the 52-year-old teacher with three kids in college.

“I’m a single parent and I’m trying to make that work, and I can’t unless I work three jobs,” he said.

Mayo’s kids work, but he has to help them pay for their tuition and car loans. So, on top of teaching, Mayo works for a test preparation company in Sugar Land on weekends and weeknights. He also helps coach baseball for Bellaire during the offseason.

To make it through especially rough years, Mayo said he has sold his plasma. And he has done everything to save money, including moving in with his mom two years ago.

“It’s ridiculous, but that’s what we have to do to get by,” Mayo said.

Like for Mayo, living under a teacher’s salary is hard for many single parents.

When Holly Cooper divorced in 2000, her take-home pay amounted to roughly $20,400. She worked as a waitress, tutor and babysitter to sustain herself and her baby.

Today, Cooper is 43, remarried and runs a furniture refurbishing business with her husband, in addition to teaching kindergarten at New Diana ISD for $49,000 a year.

She says the business has been a relief, allowing her to earn extra income under a flexible schedule.

“It helps us make ends meet. It has helped us pay for vehicle repairs, medical expenses,” Cooper said. “With the other things to make money, I missed out on personal activities that my kids are involved in.”

But other teachers aren’t lucky enough to have family businesses, meaning they have to pull away from other important things in their lives to make ends meet.

“I’m spending less time with my family, and it’s less time that I could be spending on my lesson plans,” said Robyn Ammons, who first began teaching in Waco in 2006 around the time she got divorced.

Billy Terry, a 42-year-old sixth grade social studies teacher at White Oak ISD, recently quit coaching and running his own business to spend more time with his daughter. To survive on his $42,000 salary, Terry has had to cut corners wherever he can.

“I have not eaten, so I can make sure my daughter had to,” he says. “I don’t get all my prescriptions anymore.”

‘This needs to pass’

When Ammons and Mayo learned about Senate Bill 3, which proposes $5,000 pay raises for public school teachers in the next two years, they saw a glimmer of hope. Lt. Gov. Dan Patrick has named the bill one of his top priorities this year, and it has already unanimously passed the Senate.

“I might be able to not have to work during the weekend,” Ammons said. “And hopefully I would not be living paycheck to paycheck.”

Mayo says he would still have to work two jobs, but the raise would help him with at least one car payment a month.

But not everyone is convinced that a $5,000 across-the-board raise is the best course of action. Some school district leaders say they need more flexibility with any additional funding.

And the House’s $9 billion school finance bill, does not guarantee across-the-board raises. Instead, it grants school districts the discretion to decide how to spend their extra funds. On Wednesday, at least one Democratic lawmaker, Rep. Richard Raymond, D-Laredo, is hoping to change it to include a directed pay raise.

After learning about the House proposal, Mayo drove to Austin to speak against the bill and its merit pay provision at a March 12 public hearing.

Mayo didn’t get to speak at the hearing, which lasted past midnight. Since then, the merit pay provision of the House bill has been stripped, but Mayo is still concerned SB 3 won’t make it through the House.

“This needs to pass,” Mayo said. “You talk to most teachers and they say ‘I won’t believe it until I see it’ because this is usually what happens. Somewhere along the way it gets lost.”

With the raise, Texas’ average teacher salary would still be about $2,300 behind the national average, according to the National Education Association.

But the raises also sound too good to be true for Whitley-Lemke, who says she’s pretty “sure there’s going to be some sort of catch.”

Terry said the raise would be “a nice gesture” from lawmakers, but he will probably still leave education.

“I like my profession, but the pay is killing it. I’m being pushed out,” Terry said. “I’m looking for another job as we speak.”

Disclosure: The Texas State Teachers Association has been a financial supporter of The Texas Tribune, a nonprofit, nonpartisan news organization that is funded in part by donations from members, foundations and corporate sponsors. Financial supporters play no role in the Tribune's journalism. Find a complete list of them here.