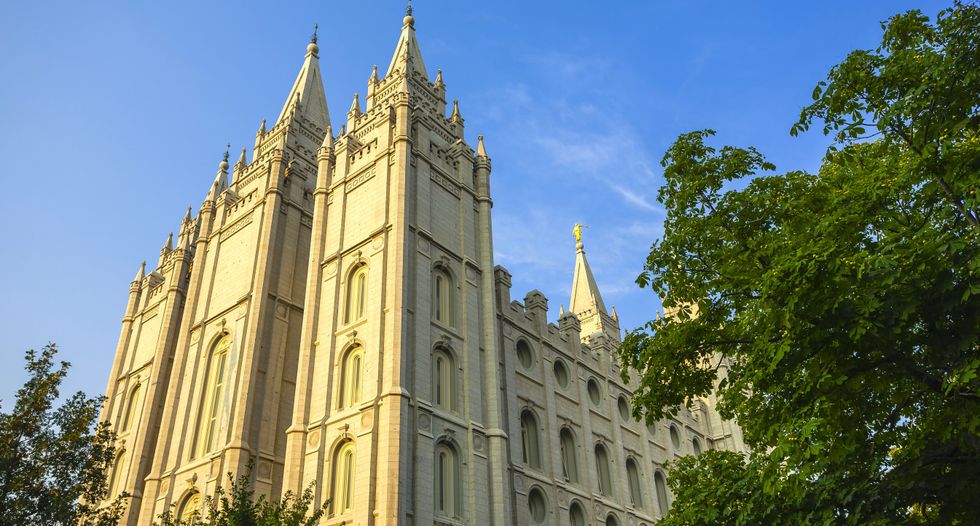 Top leaders of the Church of Jesus Christ of Latter-day Saints have reversed a policy that prevented minor children of same-sex married couples from joining the church and participating in its sacred rituals since 2015.

Many conservative churches oppose same-sex relationships and have done so with increased intensity since the second half of the 20th century. In the case of Latter-day Saints, the reasons for opposing same-sex marriage are based in their theology of a “real family,” as willed by God.

However, as a scholar of gender and sexuality in Mormonism, I argue that the 2015 decision to bar children of same-sex parents from the church was tied to the conservative fight against same-sex marriage that was finding an increasing acceptance at the time in courts and elsewhere.

Mormon theology is based on a divine heterosexual archetype that sets the pattern for all intimate human relationships. 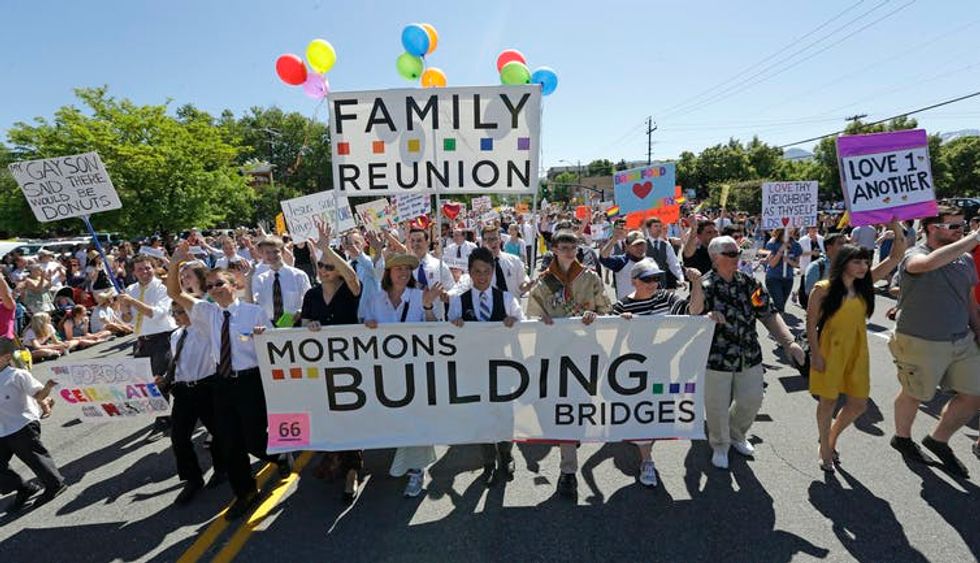 Mormons protest over the 2015 rule change by church officials that bars children of same-sex couple from being baptized.

When the policy was adopted in 2015, the church deemed same-sex married Latter-day Saints as “apostate” and excommunicated them. This involved removing their names from the records of the church and nullifying any previous rituals.

In order to explain why the children were also deserving of official sanction, the church said it was an effort to “protect” them.

One senior church leader claimed that it was an act of “love” and “kindness” to prevent the children of same-sex families from participating and joining the church. One church leader, Elder D. Todd Christofferson, said, “We don’t want the child to have to deal with issues that might arise where the parents feel one way and the expectations of the Church are very different.”

In the religious practice of Latter-day Saints, a child’s name on church records initiates visits to their home and an expectation of attending church-sponsored activities. Christofferson claimed, that it would not be “an appropriate thing” for a child living with a same-sex couple.

The church even issued an official statement about not wanting to subject children to teachings that their same-sex married parents were “apostates.”

What I argue is that the roots of rhetoric of the focus on family goes back to the emergence of the anti-gay politics of religious conservatives starting in the 1970s.

At the time, several preachers and anti-gay activists such as Billy Graham, Jerry Falwell, Tim LaHaye and others increasingly spoke out against the gay rights movement as a threat to “family values” that would undermine society. Latter-day Saints joined this opposition.

These conservatives, advocating for “family values,” opposed same-sex marriage. These efforts often relied on claims that same-sex marriage would harm children belonging to same-sex families as well as those children who interacted with them.

In 1977, evangelical activist Anita Bryant launched a national campaign against the gay rights movement, specifically to keep gays and lesbians out of schools, and successfully rallied conservatives to this cause.

Bryant’s campaign was a simple slogan, “Save Our Children,” which depicted gay men and lesbians as pedophiles recruiting young people into “perversion.” Her campaign also suggested that “our children” belonged only to heterosexual people. 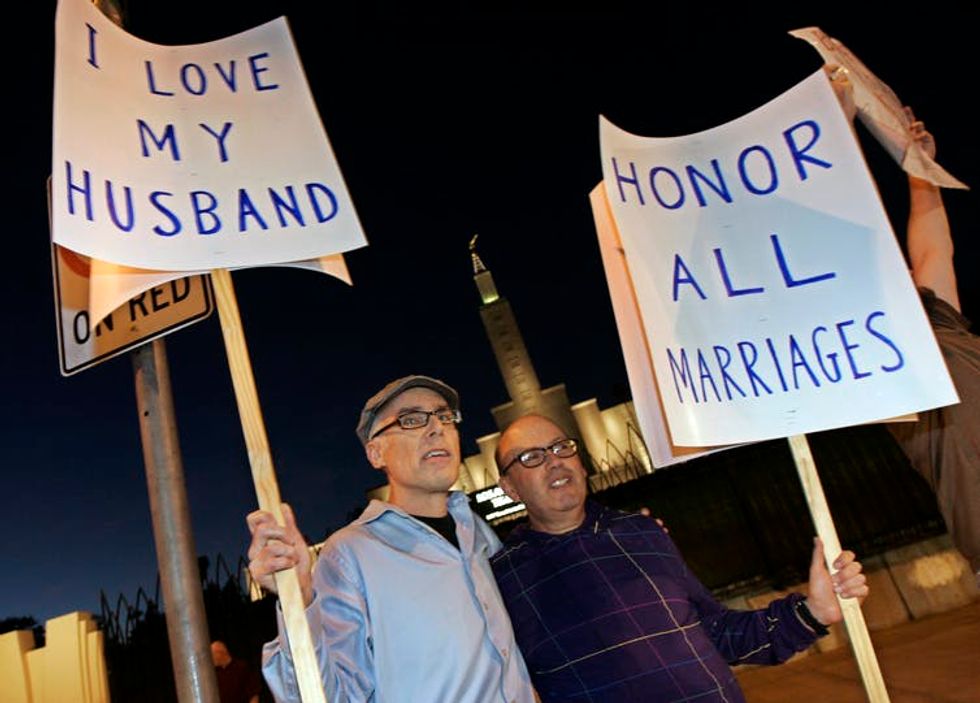 In the 1990s, the Church of Jesus Christ of Latter-day Saints backed campaigns and mobilized members and money to deny same-sex couples the right to create legally protected families.

The policy on children was a response to a U.S. Supreme Court decision earlier that year that legalized same-sex marriage.

When it was first announced, the policy was deeply unpopular among the rank and file. The truth is that many members of the church increasingly support same-sex marriage.

A Public Religion Research Institute survey found that 55% of Mormons opposed same-sex marriage in 2016. But this number was rapidly declining. In 2015, the same survey had found 66% of Mormons opposing same sex marriages. In one year, it noted, there was an 11-point drop in opposition, with a corresponding 11-point increase in support. 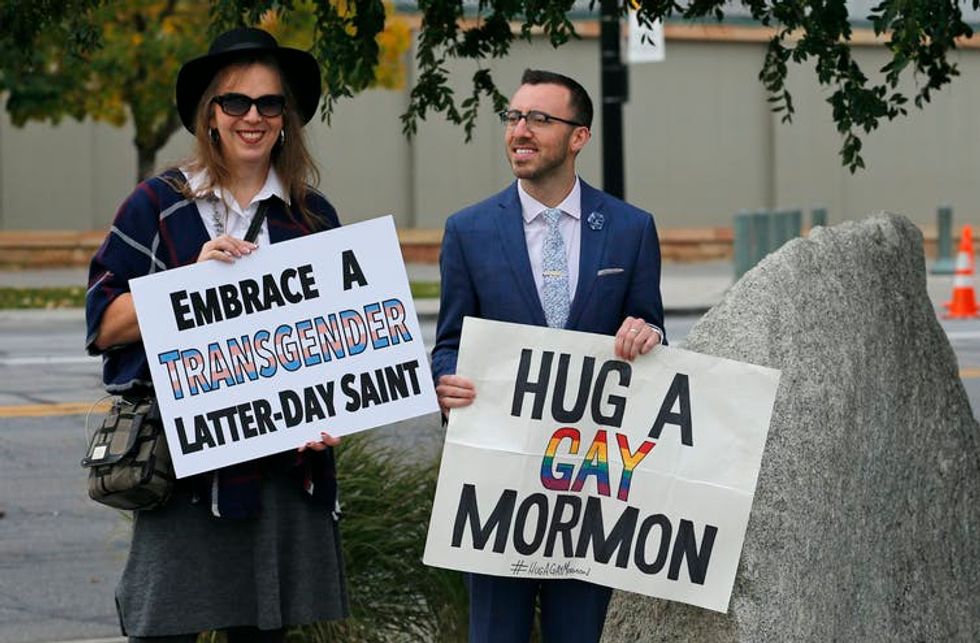 People holding placards at an annual conference of The Church of Jesus Christ of Latter-day Saints in Salt Lake City in 2018.

In light of this trend, it was no surprise to see the unpopular policy reversed.

The reversal of the 2015 policy, however, does not change the status of same-sex relationships in the church. These relationships are still forbidden and subject couples to potential excommunication. Only their children can once again participate fully in the church without sanction.

In my view, the church faces a real conceptual problem when it comes to imagining same-sex families as “real families” that may include children. How can it support the children of same-sex families when its teachings claim that they are “counterfeit and alternative lifestyles” and not part of the family organization willed by God?