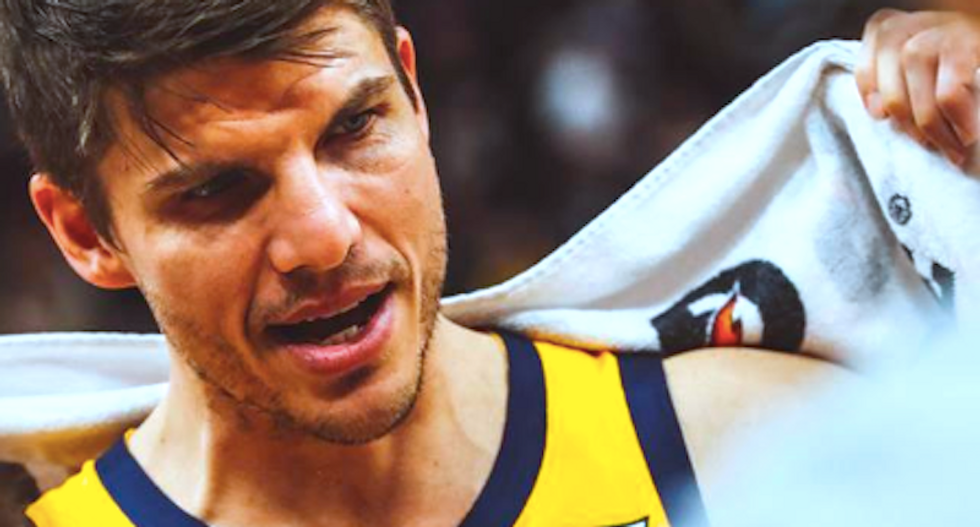 Utah Jazz guard Kyle Korver is often one of the only white players on his team, and he's been thinking a lot lately about how race sets him apart from most of the other NBA players.

The 38-year-old Korver was on the floor last month when a fan hurled racist abuse at Oklahoma City Thunder guard Russell Westbrook, and he found himself embarrassed by his own initial reaction to the incident, according to an essay published by The Players' Tribune.

"I didn’t actually see or hear what happened, and if you were following on TV or on Twitter, maybe you had a similar initial viewing of it," Korver wrote. "Then, after the game, one of our reporters asked me for my response to what had gone down between Russ and the fan. I told him I hadn’t seen it — and added something like, But you know Russ. He gets into it with the crowd a lot."

The Jazz ended up banning that racist heckler for life, after his actions became clear, and Korver said the incident forced him to confront his initial reaction to the arrest of his teammate and close friend Thabo Sefolosha -- whose leg was broken during the 2015 incident.

"On the morning I found out that Thabo had been arrested, want to know what my first thought was? About my friend and teammate? My first thought was: What was Thabo doing out at a club on a back-to-back??" Korver wrote."Before I knew the full story, and before I’d even had the chance to talk to Thabo….. I sort of blamed Thabo."

Korver said the discussions he's had with teammates in recent weeks have forced him to confront some uncomfortable truths about himself, and about racism in the United States.

"No matter how passionately I commit to being an ally," Korver wrote. "and no matter how unwavering my support is for NBA and WNBA players of color, I’m still in this conversation from the privileged perspective of opting in to it. Which of course means that on the flip side, I could just as easily opt out of it. Every day, I’m given that choice — I’m granted that privilege — based on the color of my skin."

Korver said he doesn't believe that white people are guilty of the racist sins of their ancestors, but he does believe they share responsibility -- and he challenged himself to listen better and educate himself on the history of racism.

"We all have to be accountable — period," he wrote. "Not just for our own actions, but also for the ways that our inaction can create a 'safe' space for toxic behavior."