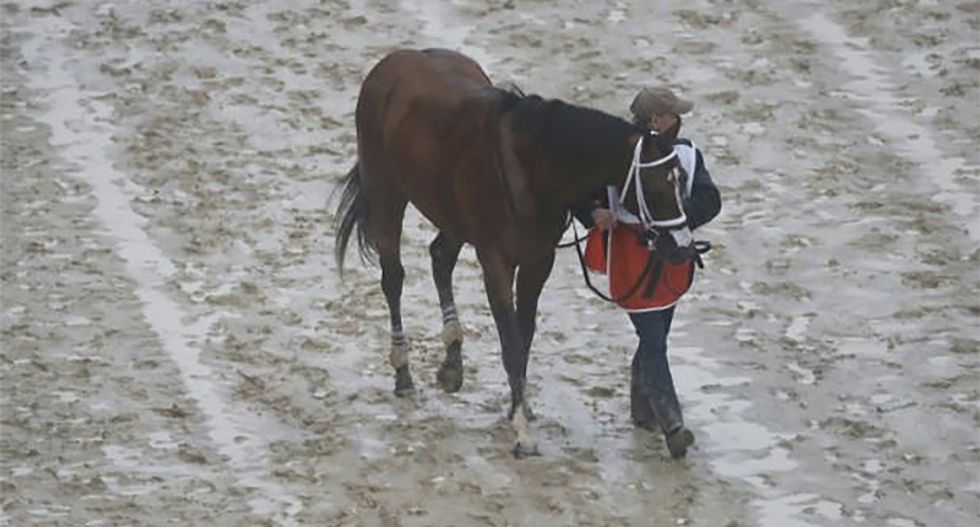 Maximum Security is lead away after being disqualified from first place in the 145th Kentucky Derby at Churchill Downs on Saturday (Photo: GETTY IMAGES NORTH AMERICA/AFP/File / JAMIE SQUIRE)

The Kentucky Horse Racing Commission dismissed an appeal against Maximum Security's dramatic Kentucky Derby disqualification on Monday as the thoroughbred's owners raised the prospect of a legal battle for the horse's reinstatement.

Kentucky racing authorities swiftly rejected the appeal lodged by Maximum Security's connections after informing the horse's owners that disqualifications are exempt from the appeal process.

Maximum Security was first past the post in Saturday's 145th running of the Derby at Churchill Downs, but in an unprecedented move the colt was bumped to 17th in the field of 19 because stewards judged he interfered with other horses when he veered out from the rail as the field rounded the turn for home.

Country House, a 65-1 longshot that crossed the line 1 3/4 lengths behind Maximum Security, was declared the winner.

It was the first time the horse that crossed the finish line first in the Derby was denied victory because it hindered another horse.

Owner Gary West said on NBC's "Today" show on Monday that he felt stewards were "non-transparent" about their decision-making process, which left connections of both horses -- and bettors -- in suspense for 22 minutes as they made their decision.

"The stewards wrote a statement that was probably prepared by their lawyers and refused, literally refused, to take a single question from the media," said West, 73. "So they have been about as non-transparent about this whole thing as anything I've ever seen in my life."

The appeal filed through Lexington-based lawyer Barry Stilz claimed "arbitrary and capricious acts" by the stewards and sought to have the purse money held in escrow until the appeal was resolved.

Within hours, the KHRC had rejected the appeal, in a letter from general counsel John L. Forgy to the West's lawyer.

"The stewards unanimously disqualified Maximum Security following two objections lodged immediately after the 145th running of the Kentucky Derby and after a thorough review of the race replay. That determination is not subject to an appeal," Forgy wrote.

It was not immediately clear if that would be an end to the matter.

In his "Today" show appearance West signaled he would consider taking the matter to court.

"If the state racing commission refuses to hear about it, I think this is something that's big enough that the entire racing world is looking at this and I think they deserve an opportunity to really know what was going on," said West, who added that Maximum Security would not run in the Preakness, the second jewel in US flat racing's Triple Crown which also includes the Belmont Stakes.

"There is no Triple Crown on the line for us," said West. "There is no reason to run a horse back in two weeks when you don't have to."

West, a self-made billionaire who served a 10-month tour of duty during the Vietnam War in 1968, meanwhile admitted he had struggled to come to terms with Saturday afternoon's post-race drama, describing a mood of elation that turned to despair.

"Winning it was probably the most euphoric thing (my wife) Mary and I have ever had in our lives, and then disappointment when they took him down for the first time in history," West said. "We were stunned, shocked and in total disbelief."

Legendary trainer Bob Baffert meanwhile had some sympathy for Maximum Security's connections, telling Sports Illustrated he was unimpressed by those who had challenged the initial result.

"Twenty-horse field. I have been wiped out numerous times, but that is the Derby," Baffert told SI.com.

"I can see by the book why they did it. But sometimes you've got to take your ass-kickings with dignity."