Republicans attend rally to carve out new Christian state: ‘It’s either going to be bloodshed or Liberty State’ 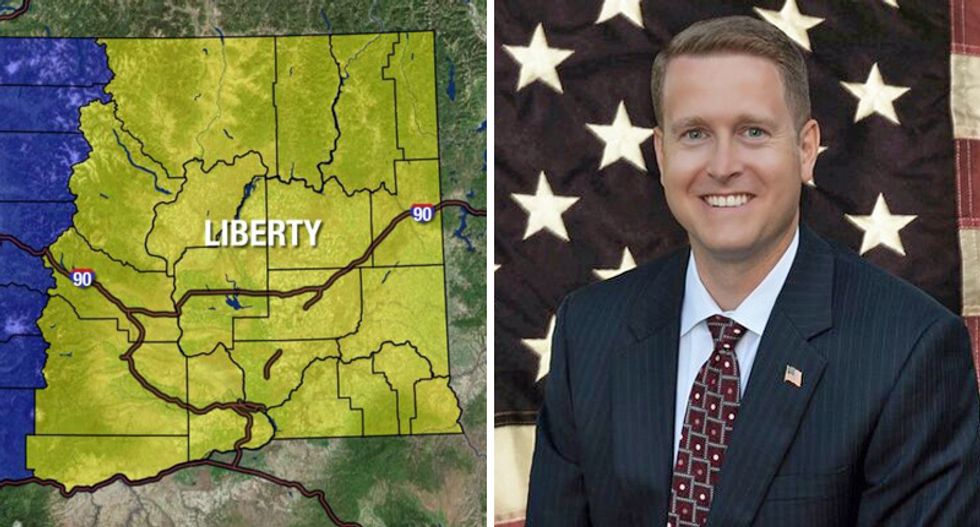 The far-right gathered in Spokane Valley to push for the creation of Liberty State, a 51st US state that is intended to be something of a wildlife sanctuary for Christian conservatives, the Spokesman-Review reported Friday.

"The Liberty State Gala drew about 200 people to the CenterPlace Regional Event Center in Spokane Valley. Supporters of the new Christian conservative state – which would span parts of Washington and Oregon as well as Idaho, Montana and Wyoming – raised money by auctioning pies and other desserts," the newspaper reported.

In April, Shea was caught conspiring to far-right extremists to commit acts of violence against liberal activists. In response, Shea quoted an anti-Semitic website to lash out at the journalist who exposed him.

Shea was not the only elected official to attend the Liberty State rally.

"The lineup of speakers included Shea, a Spokane Valley Republican who has championed the Liberty State movement; Spokane City Councilman Mike Fagan; Spokane City Council candidate Tim Benn; and Loren Culp, the police chief in Republic, Washington, who made national headlines when he pledged not to enforce a controversial gun control initiative that voters passed in November," the Spokesman-Review noted. "County Prosecutor Larry Haskell, former Treasurer Rob Chase and gun activist Anthony Bosworth also were in attendance, as were Barry and Anne Byrd, who lead the Marble Community Fellowship in northern Stevens County."

Shea's legislative assistant, Rene' Holaday, warned of violence if people did not go along with the idea of the new state.

“It’s either going to be bloodshed or Liberty State," Holaday said ominously.