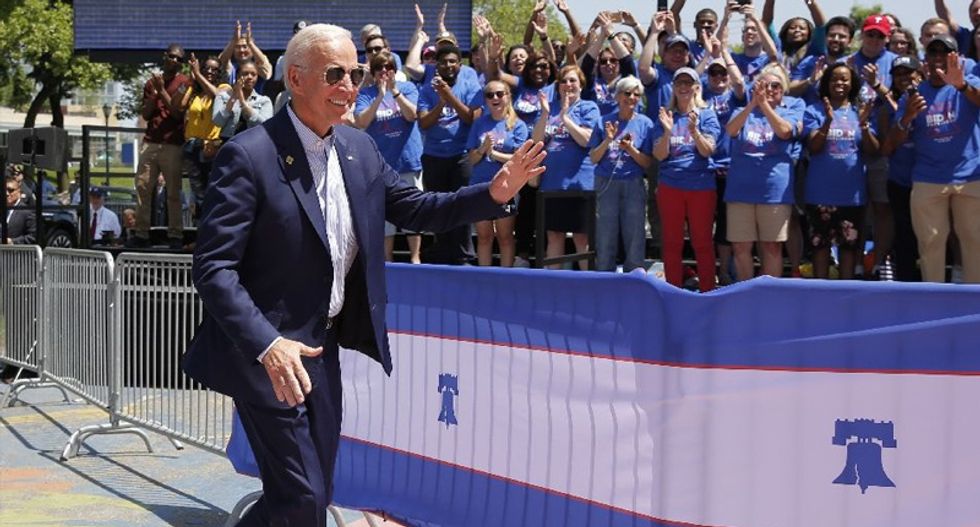 Former US vice president Joe Biden -- seen at the kick-off of his presidential election campaign in Philadelphia, Pennsylvania, on May 18, 2019 -- hasn't been campaigning as much as his rivals in the party (AFP Photo/Dominick Reuter)

While Democratic presidential hopefuls barnstorm through early voting states, the party's frontrunner for the nomination, Joe Biden, is working at a different pace altogether, rolling out his 2020 campaign in limited stages and to moderate numbers of voters.

Despite Biden's sluggish start, President Donald Trump is already fixating on the former vice president as his main rival in next year's election, going so far as to invoke North Korea's dictator in tweets criticizing Biden.

Biden didn't refer to the debacle during a teachers' union town hall that lasted more than an hour Tuesday in Houston, Texas, his first public campaign event in 10 days.

But in a possible response to the growing criticism of his spotty public appearances, he announced several more campaign events to take place this week and published his first detailed policy proposals -- on education.

When Biden does hit the trail, he routinely promises that "no one is going to work longer and campaign harder" to win voter trust and support in the run-up to 2020.

But since officially launching his White House bid in April, the veteran Democrat has made fewer than a dozen campaign stops, and his team has routinely offered a daily update to reporters: "Joe Biden has no public events scheduled."

During that period, Senator Cory Booker has crisscrossed Iowa in an RV camper; Bernie Sanders, number two in the Democratic polls, has campaigned in four states; and Senator Elizabeth Warren has held no less than eight public events, including four on Sunday.

After his campaign kickoff rally on May 18 in Philadelphia, the 76-year-old Biden has largely kept his head down, attending fundraisers in Florida and Tennessee. Fundraisers are also set for this week in Texas.

While Biden has eased into the race, Trump has not hesitated to attack him, including sending eyebrow-raising tweets during his visit to Japan amid tensions with North Korea and its leader Kim Jong Un.

On Tuesday, the Biden camp pushed back firmly, calling the president's comments "beneath the dignity of the office" and part of a pattern of Trump "embracing autocrats."

"To be on foreign soil, on Memorial Day, and to side repeatedly with a murderous dictator against a fellow American and former Vice President speaks for itself," deputy campaign manager Kate Bedingfield said in a statement.

A senior campaign official said the Biden team waited until after Memorial Day out of respect for the "sacred purpose" of the holiday that honors veterans."

Trump hit back on Twitter, saying he "was actually sticking up for Sleepy Joe Biden while on foreign soil," and that "Kim Jong Un called him a 'low IQ idiot,' and many other things."

Advisors have argued that because of his near-universal name recognition, and popularity within Democratic circles, Biden does not need to relentlessly introduce himself to voters, as several other candidates are doing.

His commanding lead in early polling also signals that media attention will follow him wherever and whenever he hits the campaign trail.

Biden senior advisor Symone Sanders said at the Philadelphia rally that the candidate will soon ramp up his campaigning.

"He knows that folks have questions about his stamina, his ability to go long days, long nights," she said. "What he'll tell you is 'just watch, just wait and see.'"

Several instances when Biden was deemed to have been too "tactile" with women threaten his bid, with some women denouncing his gestures as too affectionate.

But despite the criticism, Biden held a 10-year-old girl by the shoulders at the teachers' town hall after she asked him a question and he told her: "I bet you're as bright as you're good looking."