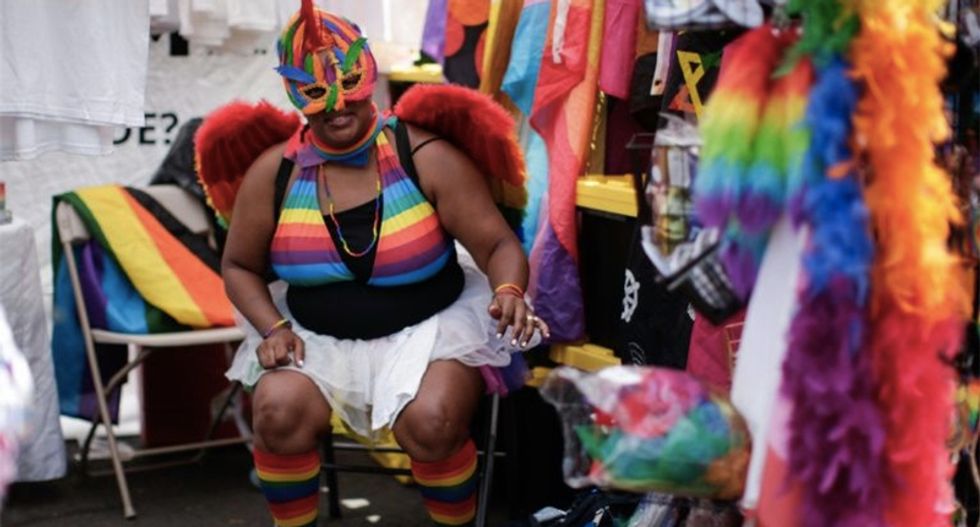 A woman waits for customers at a stand on the route of the Harlem Pride march in New York (Photo: AFP)

Like the broader movement of which it is a part, the black LGBTQ community is celebrating advances since the historic Stonewall riots in New York -- while continuing to face serious discrimination and ill-treatment.

Some 15,000 people took part in Saturday's Harlem Pride parade, an offshoot of New York's larger Pride March on Sunday. The setting was a neighborhood long synonymous with African American culture.

"It's important that we have a community for gay people, especially African American gay people, because you don't really hear too much about them," Leon McCutcheon, who is black, gay and 60.

Raising the group's visibility is an important part of the work of the National Black Justice Coalition, of which David Johns is executive director.

"Many of the gains that have been made associated with the gay liberation movement... exclude people like me who are equally proud of being both black and queer," he said.

"It is ironic," Johns added, that some people "somewhat take for granted being able to wear rainbows and march in a parade and take up space and draw strength from being queer, when black LGBTQ people are still erased."

Black LGBTQ people face particularly serious problems in their dealings outside the gay community, he added.

In 2017, of 52 killings in the US of non-heterosexuals, 71 percent targeted people of color, according to the Anti-Violence Project (AVP).

Just since the beginning of this year, 11 black transgender women have been murdered, the Human Rights Campaign has reported.

Discrimination is found in other forms than violence. A 2009 study by the Williams Institute on Sexual Orientation and Gender Identity found that 32 percent of the children of gay black couples lived below the poverty line, compared to 13 percent for black heterosexual couples.

"And in too many communities and spaces throughout America, people are ill-equipped to have conversations about identity," he said.

Even in Harlem, the LGBTQ community encounters occasional hostility. In late May, two rainbow flags were burned by a vandal outside the Alibi Lounge, the neighborhood’s only LGBTQ bar.

"We have a big community here," said McCutcheon, "but there are still a lot of people my age that are afraid to come out."

He believes that religion plays a role, particularly in places like his native South Carolina, which a Pew Research survey rated as one of the most religious states in the country.

On top of that, McCutcheon added, is a certain traditional American attitude toward masculinity that holds that "if you're gay... you're a sissy."

"Stigma is still a real thing," he said. "These other factors in the community are things that we have to address."

But things are changing, in McCutcheon's view. He said his sister, who had long been troubled by his sexual orientation, is starting to get used to the idea.

After the burning of the rainbow flags outside the Alibi Lounge, "the neighbors rallied around us," said Alexi Minko, the bar's owner.

"People from across the board, gays, straight, young, old, came within hours to show their support, and that it was an isolated incident... in no point reflecting the values of Harlem."

Around the same time, New York Mayor Bill de Blasio announced that a monument would be erected to a black transgender heroine and Stonewall veteran, Marsha Johnson, as well as to another trans activist, Sylvia Rivera, in what is being called a world first.

The June 1969 riots sparked by repeated police raids on the Stonewall Inn, a popular gay bar in New York's Greenwich Village, proved to be a turning point in the LGBTQ community's struggle for civil rights.

For black LGBTQ people, it was a striking recognition of two of the great figures in their history, up to now largely forgotten.

"Those were pivotal people in the whole start of Stonewall," said Carmen Neely, president and co-founder of Harlem Pride.

"So we celebrate Stonewall, because Stonewall is black history."