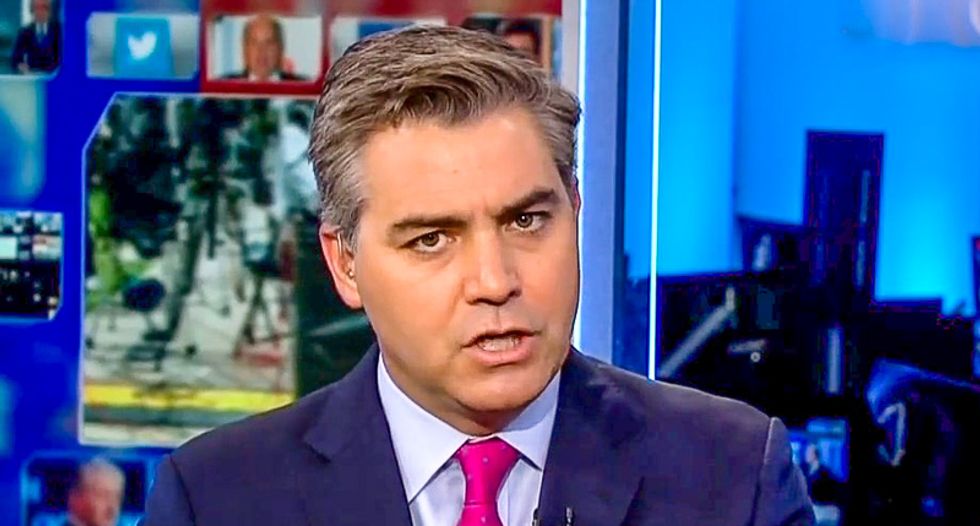 In an interview with "CBS Sunday Morning," CNN White House correspondent Jim Acosta lashed out at Donald Trump and his aides for how they have treated the press -- saying he has been deluged with death threats after the president's attacks.

Speaking with CBS correspondent Chip Reid, Acosta -- who is promoting his book "The Enemy of the People -- A Dangerous Time to Tell the Truth In America" -- said his job is not to just report what Trump and White House Spokesperson Sarah Sanders say, but to call them out for obvious lies.

"Now, there are two basic criticisms of you from some of your colleagues, and certainly from the White House, and one of them is that you grandstand, that you sometimes make the news rather than report on the news. Is that a valid criticism?" Reid asked.

"I know folks are going to say that. I look at it as I'm doing my job," Acosta remarked. "I see this as a very serious, serious moment in our nation's history. And I think, to some extent, we have been trying to figure out the best way to cover this president," before adding that his style is the one he prefers.

As for how Trump and the White House have treated him, the CNN correspondent said they have made life hard --including the personal insults and attacks that have led to threats from the president's rabid base.

"The man who sent the pipe bombs to CNN and other Democratic targets in the fall of 2018, on his social media account, he was directing death threats at me," Acosta explained. "Something along the lines of, 'You're next. You're the enemy of America,' and so on. And so, my sense of it is that what started off as an act for the president, calling us 'fake news,' calling us the 'enemy of the people' and so on, has gotten out of control. And they don't know how to reel it back in."

Acosta also pointed out that he misses the daily -- mostly contentious-- press briefings, saying it is a loss for the whole country.