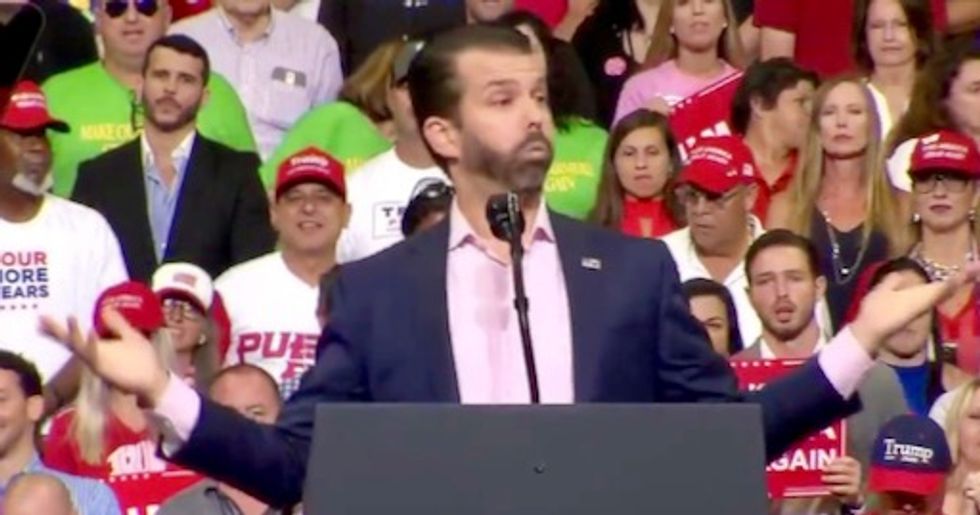 "Cancer isn’t a joke and wanting to cure cancer isn’t a punchline," was one of many criticisms leveled against the president's son.

Donald Trump Jr. was part of the opening act for President Donald Trump's re-election campaign launch Tuesday night. During the warm-up to the President's official announcement, Don Jr. mocked former Vice President Joe Biden for saying if he is elected President he will cure cancer.

“I’ve worked so hard in my career that, I promise you, if I’m elected president, you’re going to see the single most important thing that changes America: We’re going to cure cancer,” Biden told supporters earlier this month.

As Vice President he was in charge of the Obama administration's "Cancer Moonshot," a focused effort to cure the disease. It was an initiative created after Biden lost his own son, Beau Biden, to brain cancer n 2015. Beau was 46 when he died, the eldest child of the former Vice President's first marriage. Joe Biden's first wife and one-year old daughter were killed in a car accident while Christmas shopping, weeks after he had first been elected to the U.S. Senate.

“I hear brilliant guys like Joe Biden,” the President's son said of the current Democratic frontrunner. “‘Government has failed you.’ Usually, as he’s groping someone,” Trump Jr. said, according to Fox News.

“If government failed you, maybe you’re the problem, Joe Biden.”

“There’s something off with that guy,” Trump Jr. continued. "What was the good one last week? Remember? Joe Biden comes out, 'Well, if you elect me president, I’m going to cure cancer.' Wow, why the hell didn’t you do that over the last 50 years, Joe?"

On social media many were stunned and flabbergasted at the cruelty of the President's son – and the president's supporters, who were lapping up mocking a man over losing his son to cancer.

Trump just said he will cure cancer. After his son made fun of Biden for saying it. Nothing matters.
— Jonathan Allen (@Jonathan Allen) 1560907783.0