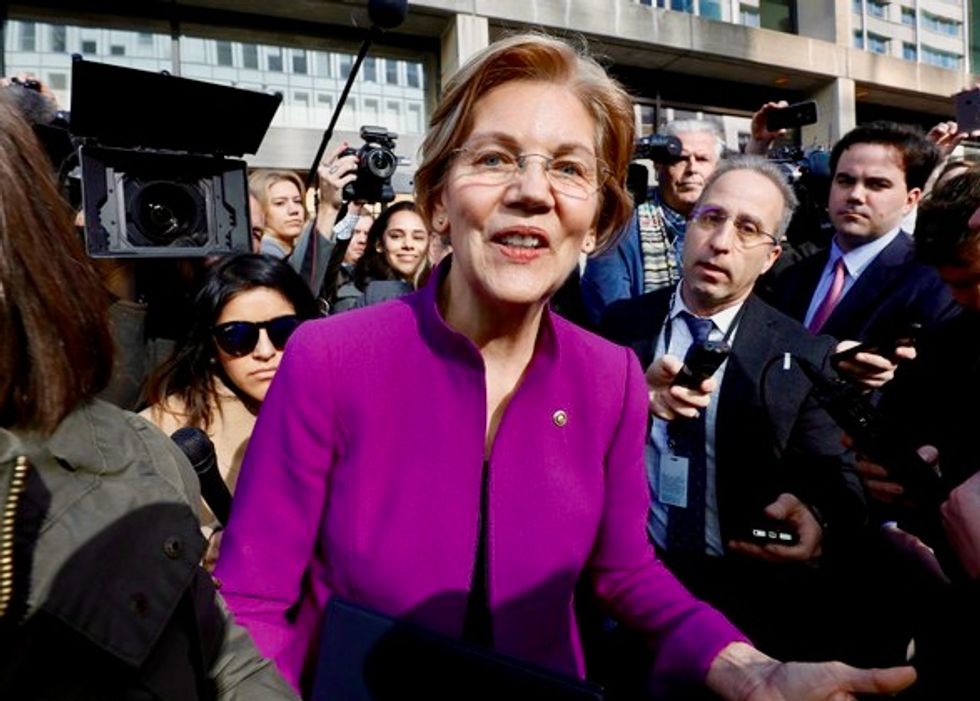 At a town hall in Lansing, Michigan on Tuesday evening, Sen. Elizabeth Warren urged voters to take action to fight concerns that Joe Biden is already poised to win the Democratic presidential nomination more than a year before the party officially elects its nominee.

To make sure their favored candidate has a chance to beat Biden, Warren said, voters must take action by volunteering for campaigns in any way that they're able.

At Lansing Community College, where about 1,700 people gathered to hear Warren discuss issues including clean energy and trade, an audience member named Cruz Villareal pointed to the 2016 Democratic primary, when party insiders known as superdelegates announced their support for Hillary Clinton a day before six states including the crucial state of California were set to hold their primaries, sparking outrage among Sen. Bernie Sanders supporters who said the move effectively secured the nomination for Clinton prematurely.

"I'm worried the Dems aren't going to learn their lesson and just give Biden the [nomination]," Villareal said, adding that many of his friends share his worry.

How could Warren be sure, Villareal asked, that "the system isn't going to rob us of what we really want?"

Warren refused to accept the notion that Biden's status as the current frontrunner makes him the presumptive nominee—but made clear that voters must take action to give their preferred candidate a chance at winning the nomination.

The system Villareal spoke of, she said, "is us. It's you; it's me; it's that woman in the back; it's the mom over here with the kid; it's all of us. And it's going to come down to all of us."

"The way that we win in 2020 is that we talk about our vision for the kind of country that we can build; the kind of country that we will get out and fight for," she added. "This is about starting right now in a primary. You're here as potential primary voters...We have a chance now to start creating the momentum and that's going to be our comparative advantage come November 2020."

To win, Warren said, she will need the help of voters—and asked Villareal to pass that message along to his friends who are tempted to be resigned to accepting Biden as the nominee weeks before the first Democratic debate and months before the Iowa caucus.

"If [your friend] is worried, then put her worry to work—get up off her butt and volunteer!" Warren said.

Warren did not call out Biden directly, but suggested that the two candidates have fundamentally different visions for how the next president should govern.

While Warren has focused her campaign on changing the structures that many progressives believe helped create the widespread dissatisfaction that convinced voters to back President Donald Trump in 2016—pushing for taxes on the richest Americans and corporations to fund a universal childcare program, tuition-free public college and student debt forgiveness, and clean energy—Biden has called Trump an "aberration" and released centrist proposals like his climate plan, which embraces the continued use of fossil fuels.

Biden has been the frontrunner in the Democratic campaign since before he announced his candidacy in April, but in recent weeks Warren's campaign has gained momentum, with the senator polling three points behind the former vice president in one recent poll.