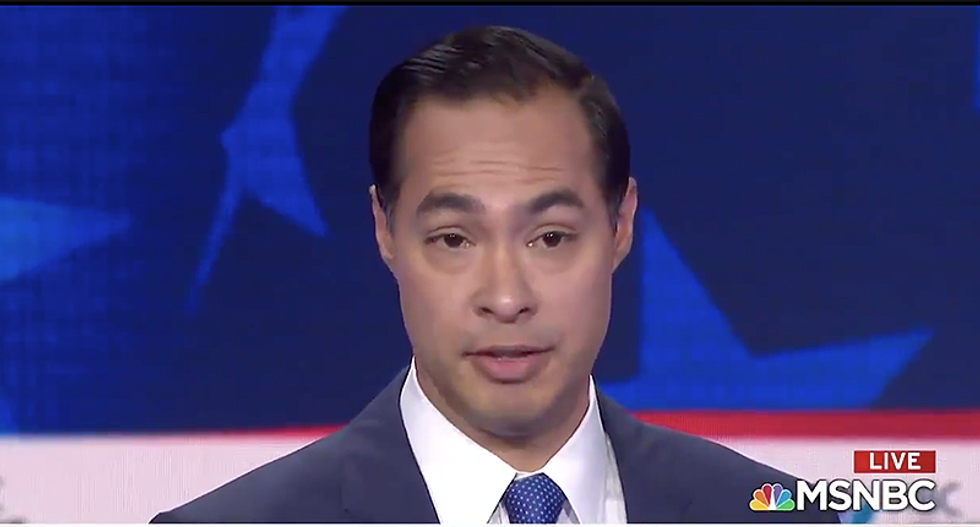 There were many predictions going into the first Democratic debate on MSNBC, but no one predicted that Julián Castro would break out from the crowd.

Check out the top three ways Castro stood out from the crowd.

It should "piss us all off," Castro said about the father and his little girl who were found face-down in the shores of the Rio Grande River this week. “It’s heartbreaking."

Castro is a second generation American who got into specifics on immigration policy, calling for an outright "Marshall Plan" style of action for Guatemala and Honduras. He joined with other Democrats calling for an end to President Donald Trump's family separation policy, but he then suggested ending the "metering" of legitimate asylum seekers.

According to Castro, "metering" is “basically what prompted Óscar and Veleria to make that risky swim across the river… they died because of that.” Indeed, the family had sought asylum but were turned away. That was when they decided to try and make it across the river, and died in the process.

He went on to talk about illegal crossings being treated as a criminal rather than civil matter and specially called out the Trump administration who tried to use it as a reason to divide up families. He went on to contrast with former Rep. Beto O'Rourke on the issue of Section 1325 of US Code which makes it a misdemeanor to cross the border illegally. Castro wants to get rid of it.

“The reason that they’re separating these little children from their families is they’re using Section 1325... to incarcerate the parents and then separate them,” Castro said.

Castro was the first Democrat on stage to mention the right for women to make their own medical decisions, despite there being three pro-choice women standing on the stage, and he crushed it, according to one feminist news site.

He continued: “More than that, everybody in this crowd and watching at home knows in our country today a person’s right to choose is under assault in places like Missouri and Alabama, in Georgia.”

He went on to even mention medical care for trans women, not something that typically makes it into political debates.

One way experts speculate a winner of a debate can be determined is by looking at how Google searches track during the debate. According to statistics, both Castro and Sen. Corey Booker (D-NJ) did exceptionally well in searches. Castro, in particular, surged by more than 2,400 percent.