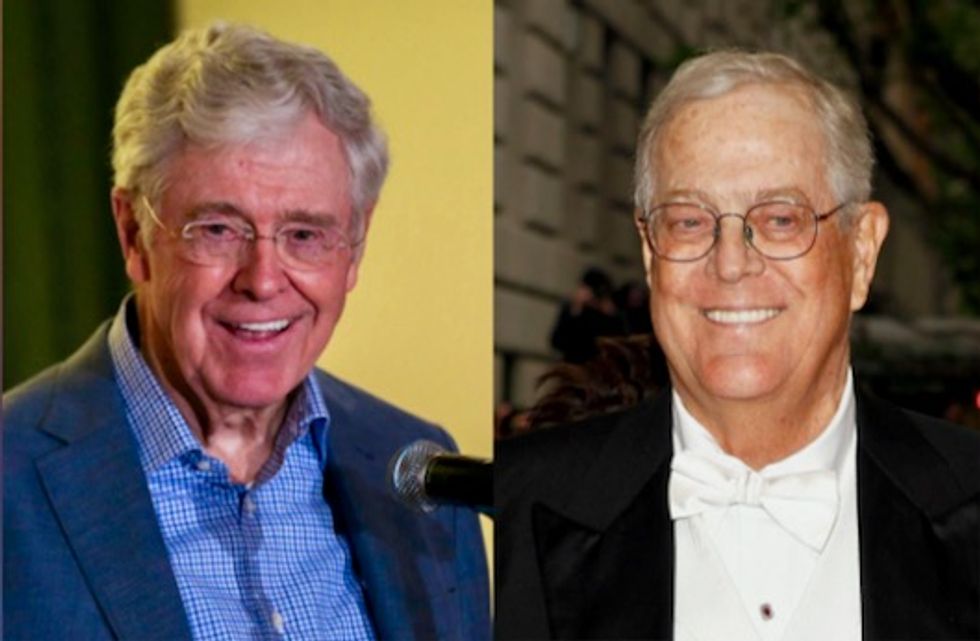 Providing yet another example of how the billionaire Koch brothers use their immense wealth to influence university research and spread their corporate-friendly ideology, a report released Monday detailed how George Washington University's ostensibly neutral Regulatory Studies Center is in fact a "key cog" in the Koch family's fight to slash government regulations designed to protect workers and the planet.

"The center is a microcosm of the strategy that Charles Koch has honed since the 1970s to finance deceptively named university centers to generate faux scholarship in support of Koch's anti-regulatory views."

Taylor Lincoln, research director for Public Citizen's Congress Watch division and author of the new report, said his findings show that the Regulatory Studies Center (RSC) "is the Fox News of the regulatory policy world, except it still clings to the fiction that it is fair and balanced."

"The center is a microcosm of the strategy that Charles Koch has honed since the 1970s to finance deceptively named university centers to generate faux scholarship in support of Koch's anti-regulatory views," Lincoln said in a statement.

According to the report (pdf), much of RSC's work revolves around providing "scholarly rationales against government regulation" of corporate America, with a particular focus on the fossil fuel industry—where Koch Industries makes much of its profits while financing campaigns to spread doubt about the reality and urgency of the climate crisis.

While the RSC is not well-known among the American public, Lincoln noted that the organization's influence can be seen in "planks of President Donald Trump's deregulatory agenda."

"These include dramatically reducing the cost that the government attributes to carbon emissions," Lincoln wrote.

As one of the "leading emitters of toxic waste and greenhouse gases in the United States," Lincoln pointed out, Koch Industries stands to benefit financially from RSC's anti-regulation work.

"The RSC's primary output consists of written materials, including analyses of discrete regulatory proposals that are submitted to government agencies under the rubric of 'public comments,'" Lincoln noted. "Although public comments submitted by RSC researchers carry a disclaimer that they represent the views of the individual researchers, not the RSC, they are remarkably consistent in the antiregulatory views they express."

Between 2013 and 2018, the Public Citizen report found, "96 percent of public comments submitted to government agencies by RSC writers who opined on the stringency of specific regulatory proposals recommended less regulation than the status quo or proposal."

"When characterizing broad regulatory trends, RSC researchers habitually cite studies—some of dubious credibility—that feed a narrative that regulations are excessive and burdensome," Lincoln wrote. "Meanwhile, these researchers typically ignore or downplay the benefits of regulations or dangers of under-regulating. These omissions are especially notable because the RSC was formed in 2009, just as the nation was crawling out of a catastrophic recession that was almost indisputably caused by gaps in the regulation of financial derivatives."

The report also found that:

"Public Citizen holds longstanding institutional positions on regulations. We generally favor rules to promote safer cars and workplaces, cleaner air, improved energy efficiency, as well as measures to prevent reckless gambling by Wall Street firms," Lincoln wrote. "We recognize—even celebrate—the rights of others to disagree with us. But it is not appropriate for George Washington University, or any university, to enable a corporate-funded, anti-regulatory group to masquerade as a neutral center of academic inquiry."

Lincoln concluded the report by calling on George Washington University to either shutter the GSC entirely or "take steps to ensure that it is not merely serving as a cog in an industry-backed campaign to attack regulation." Public Citizen also called on the university to fully disclose the GSC's funding sources.

Samantha Parsons, campaigns director for UnKoch My Campus—a group that works to expose and combat the Koch brothers' influence on colleges and universities nationwide—expressed agreement with the latter recommendation, saying in a statement that democracy advocates must hold "colleges and universities accountable by requiring them to disclose the terms and conditions attached to private sources of funding for research, courses, and faculty."

"The Koch network's dark money manipulation of our nation's colleges and universities," said Parsons, "has been proven to harm communities of color, dismantle protections for workers, and obstruct environmental protections."