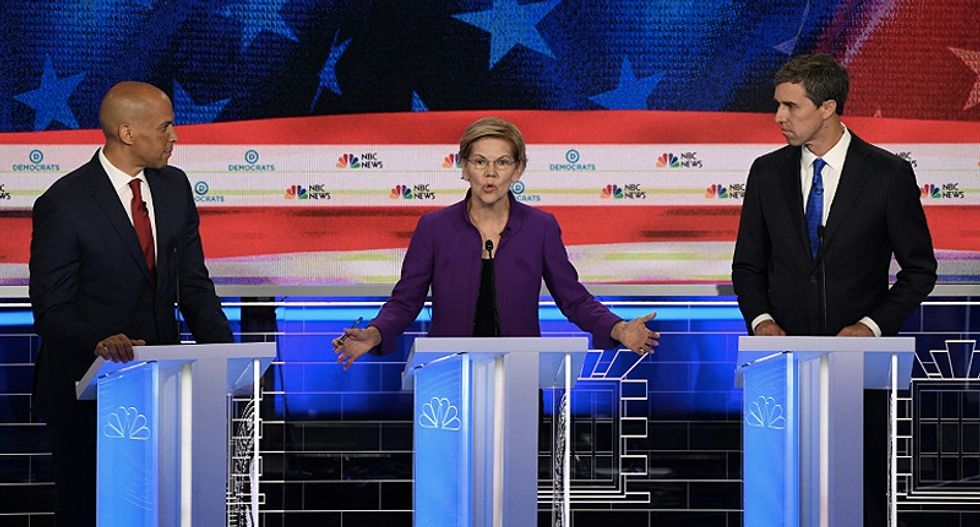 Ten Democrats clashed in the first debate of the 2020 presidential race Wednesday with Elizabeth Warren cementing her status as a top-tier candidate and several underdogs using the issue of immigration to clamor for the limelight.

Despite the feverish political climate in Washington and heavy campaigning in early voting states, millions of Americans were tuning in to the 2020 race for the first time.

What they heard right off the bat was Warren, the ideological progressive and only candidate on stage polling in double digits, knocking what she calls a rigged economy.

"Who's this economy really working for? asked Warren, who received the first question.

"When you've got a government, when you have an economy that does great for those with money and is not doing great for everyone else, that is corruption, pure and simple," the US senator and former Harvard law professor added. "We need to call it out."

With so many people on stage, candidates enjoying their first exposure to a broad national audience each had limited time to make their mark, perhaps winning a viral moment that advances their cause, draws new donors and keeps them in the headlines.

But the backdrop to the debate -- the mushrooming crisis on the US-Mexico border, the detention of migrant children in squalid conditions and a shocking photograph of a Salvadoran man and his baby daughter drowned in the Rio Grande -- led to swift, tense exchanges.

Castro, the only Latino in the race, and who unveiled a sweeping immigration plan earlier this year, called the photograph "heartbreaking."

"It should also piss us all off," he said, "and it should spur us to action."

O'Rourke, Booker and later Castro notably slipped into Spanish as they addressed the migration crisis.

De Blasio, a late entrant to the race, earned loud applause when he reminded citizens immigrants were not their enemies.

"For all the American citizens who feel you are falling behind and the American dream is not working for you, the immigrants didn't do that to you!" De Blasio boomed.

"The big corporations did that to you."

Klobuchar also rushed to the defense of immigrants, saying "they do not diminish America, they are America."

The Minnesota senator held her own as a male rival claimed he was the lone candidate who had passed legislation protecting a woman's reproductive rights.

"There's three women up here who have fought pretty hard for a woman's right to choose," Klobuchar shot back.

More than any other candidate, Warren, 70, has given a clear picture of her presidential priorities, like instituting a wealth tax, breaking up big tech companies and securing the US election system.

In closing remarks she recalled growing up in Oklahoma where a government-funded community college helped her get a break.

"And I promise you this: I will fight for you as hard as I fight for my own family."

Trump was an obvious target during the showdown, and while there was sniping among Wednesday's debaters, some trained their anger on the president, whom many of the candidates have said should face impeachment proceedings.

Congresswoman Tulsi Gabbard savaged Trump on foreign policy, saying his "chickenhawk cabinet" has "led us to the brink of war in Iran."

Despite flying to Asia Wednesday, Trump tuned in from Air Force One and did not miss the chance to knock his would-be opponents via Twitter.

His verdict as the evening got underway? "BORING!"

Many Americans will be watching more carefully Thursday when a clash of the old guard featuring Biden, 76, and Sanders, 77, might dominate.

The pair will face up-and-comers like Senator Kamala Harris, the only black woman in the race; Pete Buttigieg, the 37-year-old gay mayor of South Bend, Indiana; and dark horse Andrew Yang, an entrepreneur and political novice.