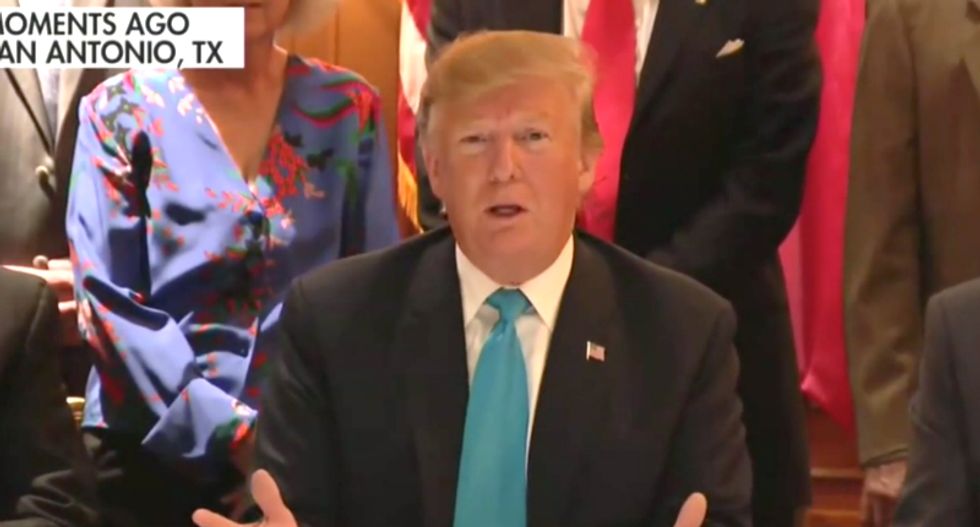 A new Quinnipiac University poll shows that President Donald Trump is surprisingly vulnerable in the red state of Texas -- and it may not be an outlier.

The Dallas Morning News reports that the new poll puts former Vice President Joe Biden four points ahead of Trump in the Lone Star State, which he won by nine points in 2016.

The poll also shows that Trump is ahead of Sen. Elizabeth Warren (D-MA) by just one point and is besting Sen. Bernie Sanders (I-VT) by three points.

Even though Texas is not the most likely red state to turn blue in 2020, there are still signs that the president could lose it if his approval numbers in the state drop by just a few points.

The latest survey from Morning Consult shows that Trump has a solid approval rating of 49 percent in Texas, although 46 percent disapprove.

However, Trump has never been as popular in Texas as he has been in other traditionally red states -- Morning Consult's tracking poll shows that the president's disapproval rating in the state has consistently been at 45 percent or higher, and it topped out at 48 percent this past January in the midst of the president's government shutdown over his proposed border wall.

New York Times' polling analyst Nate Cohn wrote earlier this year that there are many factors at play that could transform Texas into a battleground state -- if not in 2020, then certainly in the decade to come.

In particular, Cohn notes a shift among many college-educated white Texas voters toward Democrats in recent years has given Democrats an opening that they previously didn't have, even accounting for the growing Hispanic population in the state.

"Put it together, and Texas is on the cusp of being a true (if Republican-tilting) battleground state," Cohn wrote. "It might not be immediately and vigorously contested, as Arizona or North Carolina will most likely be, given the greater expense of campaigning in Texas and the fact that it starts out to the right of those states. But if Democrats chose to contest it seriously in 2020, there wouldn’t be anything crazy about that."