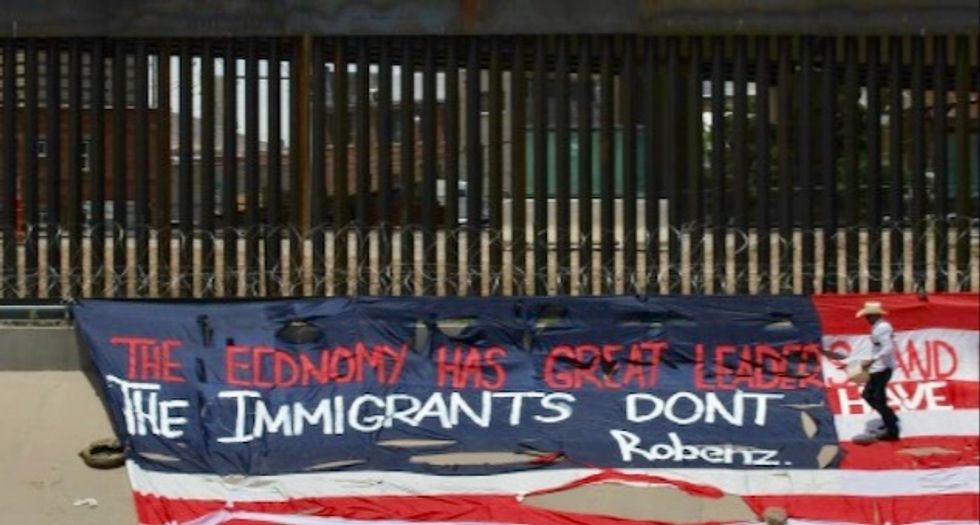 Mexican US resident Roberto Márquez, places a US flag on the border wall next to Rio Grande river in the border between El Paso, US, and Ciudad Juarez, Mexico, on June 9, 2019 AFP

President Donald Trump said Monday a secret provision of the US immigration deal with Mexico will require the approval of that country's legislature and warned US tariffs will be reinstated if it is not forthcoming.

Trump did not say what the provision entails, only that it would be revealed "in the not too distant future and will need a vote by Mexico's Legislative body."

"We do not anticipate a problem with the vote but, if for any reason the approval is not forthcoming, Tariffs will be reinstated!" he tweeted.

Trump first alluded to the secret provision in a tweet late Sunday defending the agreement with Mexico against criticism it contained little that had not already been agreed to.

He lashed out at The New York Times, calling its front page story on the deal "a FRAUD and nothing more than a badly reported 'hit job' on me ... Sick Journalism!"

The US president plunged relations between the two allies into crisis last week with an abrupt threat to slap tariffs on all Mexican imports over immigration.

Just as suddenly, a deal was reached Friday after several days of intense negotiations.

The Mexican side agreed to bolster security on its southern border and expand its policy of taking back Central American migrants as the US processes their asylum claims.

Trump, for his part, withdrew a threat to impose a five percent tariff on all Mexican imports, beginning Monday and escalating to 25 percent by October.

Trade experts and business leaders warned of devastating consequences for the economies of both countries if the tariffs went into effect.