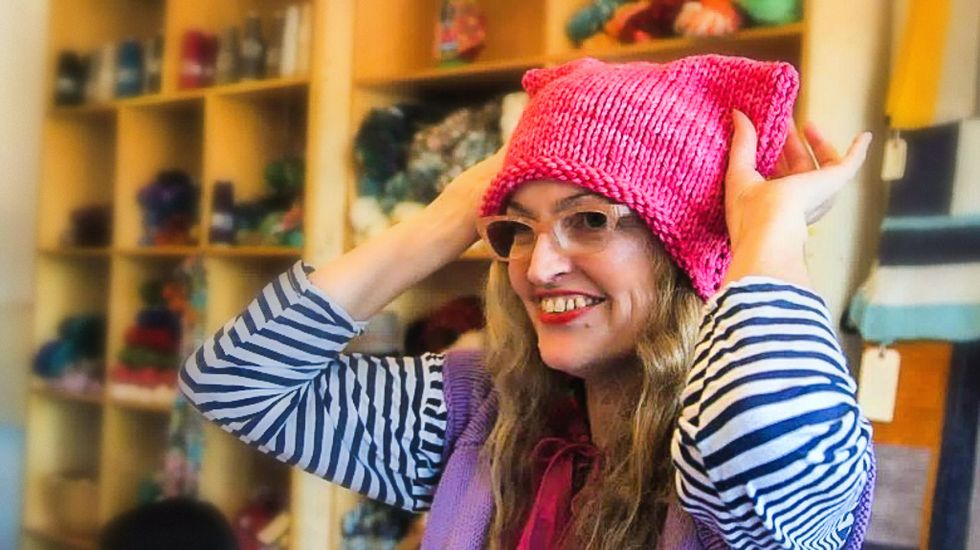 When you think of the knitting community, you might envision an elderly woman, sitting on a rocking chair in front of a fire with a pair of large knitting needles. In truth, the knitting and crocheting demographic has changed drastically in the twenty-first century, becoming younger, hipper, and increasingly tied to DIY culture.

Ravelry is a website where both millennials and knitting grannies (among other demographics) meet to talk about knitting, crocheting, weaving, and other craft and fabric arts. But if you plan to crochet a MAGA hat or knit a Trump sweater, think twice about posting it on Ravelry. The forum-style website, which is often described as "Facebook for knitters," recently issued a statement that they would ban open support of Donald Trump on their site. The widely-publicized move suggests that even communities that aren’t seen as specifically political — like knitters — are becoming politicized, sometimes in toxic ways, in an epoch of extreme political polarization in the United States.

Though observing the politics of a knitting social network might seem niche, Ravelry is incredibly popular: with over 8-million users, Ravelry is by far the most popular knitting website and community, where users can sell and share works, patterns, designs, and tips for their crafting. The site self-describes as a "place for knitters, crocheters, designers, spinners, weavers and dyers to keep track of their yarn, tools, project and pattern information, and look to others for ideas and inspiration."

Ravelry is not a blog, but a place where knitting bloggers and audiences alike can discuss and share their works and ideas. Because of the marketplace aspect of the website, Ravelry has also opened up opportunities for small businesses from many self-coined "Yarntrepreneurs" that may have never considered opening up an Etsy store or creating a blog otherwise.

The website is privately owned, opened in beta in 2007 by Boston-based husband and wife duo Jess and Casey Forbes, who founded it after they discovered there was a dearth of online communities for knitters. Even with the rising popularity of Facebook and other social media websites, Ravelry has remained the first and foremost social media network for knitting, crocheting, and other crafting. Ravelry's Twitter description reads: “Inclusive, friendly website for [knitting emoji] people around the [world]," followed by a solidarity shout-out to #BlackLivesMatter.

Ravelry's announcement on Sunday, June 23rd came as a surprise to many users and followers. Their Twitter, which has 121,000 followers as of the time that this article was posted, tweeted an announcement of their new policy:

"We are banning support of Donald Trump and his administration on Ravelry," The tweet reads. "We cannot provide a space that is inclusive of all and also allow support for open white supremacy."

In the post on their forum, which they linked to on Twitter, the site administrators clarify that they are not "endorsing Democrats nor banning Republicans" and that Trump supporters can still use the website, just can't voice their support on the website. "We are definitely not banning conservative politics," the announcement reads. "Hate groups and intolerance are different from other types of political positions."

Some theorized that the association between Trump and white supremacy followed was a late-response in Trump's failure to condemn the white nationalists of the Charlottesville 2017 "Unite the Right" protest. Trump’s response to the violence of that protest, in which one counter-protester was killed, was that there were “very fine people on both sides.”

Other members of the commentariat theorized that Ravelry's anti-Trump policy and accusations of white nationalism were caused by the recent events and treatment of immigrant children being held in detention at the Mexico border, who are reported to have been withheld soap, toothbrushes and other hygiene products.

Neither theory has basis in Ravelry's own narrative, though, as in their announcement, the site’s admins pointed towards a similar decision by roleplaying game hub forum RPGNet in October of 2018. Ravelry said that their new policy was "inspired" by RPGNet, who announced that they would ban all support of Donald Trump on their forums. Their policies and Ravelry's new policies are almost entirely the same, but with some minor different phrasing. RPG.com explains their reasoning as so:

This is because [Trump’s] public comments, policies, and the makeup of his administration are so wholly incompatible with our values that formal political neutrality is not tenable. We can be welcoming to (for example) persons of every ethnicity who want to talk about games, or we can allow support for open white supremacy. Not both.

Accusations of racism and white supremacy aren't new in either the roleplaying game world or the knitting world. The knitting demographic has become younger, though, as knitter Jaya Saxena writes in a Vox article titled “The knitting community is reckoning with racism,” the demographic is still largely white women of all ages (a demographic that Trump won by a slim margin in the last election).

Other knitters say that knitting has always been political. Twitter user Samuel West replies to the Tweet of Ravelry's announcement with an image of knitters marching with a quiltwork knit banner saying "East London knitters say balls to Trump."

Another user cites a team of grandmothers in Tasmania, Australia, called the "Tassie Nannas" who stage "knit-ins" at child imprisonment protests in Tasmania.

And then, of course, some pointed to the ubiquitous knit "pussy-hats" that were prominent in anti-Trump protests in 2016 and 2017. One Twitter user says: "The knitting & crochet community has played a prominent role in the anti-Trump movement in the past, with women wearing homemade pink ‘pussy’ hats to demonstrations becoming a distinctive symbol of protest against his presidency."