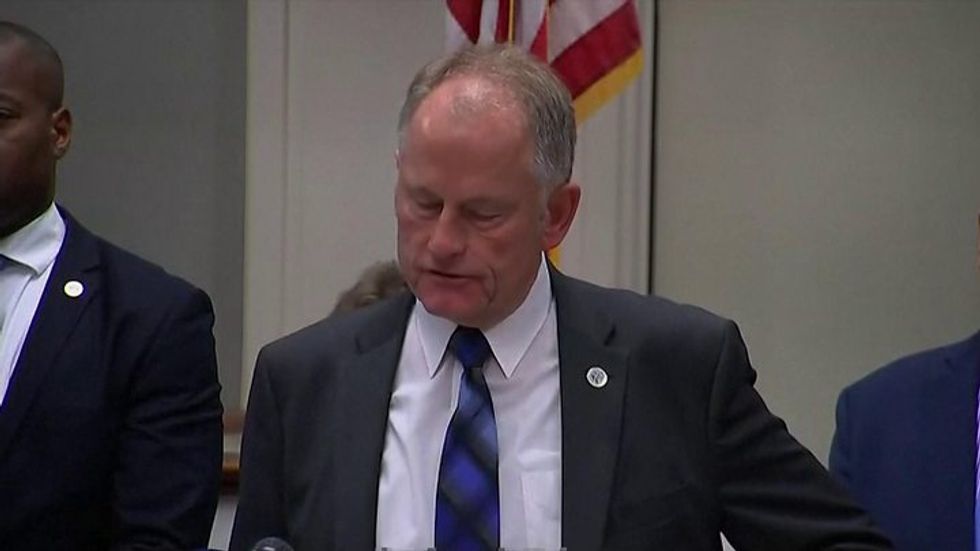 A disgruntled public utility employee opened fire with a handgun on co-workers at a municipal building in Virginia on Friday afternoon, killing 12 people and wounding four others before he was fatally shot by police.

The mass shooting in the coastal resort of Virginia Beach was the deadliest instance of US gun violence since November 2018, when a dozen people were slain at a Los Angeles-area bar and grill by a gunman who then killed himself.

Paying tribute to the victims, Virginia Beach City Manager Dave Hansen said the 12 fatalities – 11 local authority workers and one contractor – "leave a void we will never be able to fill".

Local police chief James Cervera identified the suspect as DeWayne Craddock, telling a news conference on Saturday that he would only give the name once because city authorities wanted to focus on his victims.

Craddock had been employed by the city for 15 years as an engineer and was still employed at the time of the shooting.

Cervera said the suspect was armed with a .45-caliber pistol equipped with a "sound suppressor" device and "extended" ammunition magazines he used to reload repeatedly during the attack.

Survivors recounted scenes of pandemonium and fear that erupted as gunshots rang out, and workers scurried frantically for cover.

"We just heard people yelling and screaming to get down," Megan Banton, a public utilities worker, told television station WAVY-TV, recalling that she and co-workers barricaded themselves in their office.

"We put the desk up against the door because we didn't know if they were coming in. We were just hoping that it would be over soon, and then we heard the cops yelling up the steps."

The first victim was shot in a vehicle outside the public works and utilities building at the city municipal center before the suspect entered that building and "immediately and indiscriminately fired upon all the victims," Cervera said.

The chief said the suspect engaged in a "long-term gun battle" with four police officers who confronted him inside, preventing the gunman from "committing more carnage in that building."

One officer was wounded in the shootout, but his bullet-proof vest saved his life, Cervera said. Authorities said the gunman ultimately was shot by police and was declared dead at a hospital.

Cervera said the suspect was a longtime public utilities employee, and described him as "disgruntled," but declined to say more about what may have precipitated the attack.

"We have more questions than we really have answers," he told reporters hours after the shooting.

The shooting was believed to be the deadliest act of workplace gun violence in the United States since February, when a factory worker shot five colleagues to death in Aurora, Illinois, just after he was let go from his job.

Authorities have chosen to name the suspect only once, Cervera said.

"We will release his name once," the police chief explained. "Then he will be forever referred to as 'the suspect,' because our focus now is on the dignity and respect of the victims and their families."he bloodshed unfolded, according to police, at Building Two of the municipal center complex, where office space for more than 400 employees houses information technology, public works, planning and utilities departments next door to City Hall.

The complex lies several miles inland from the town's popular seashore, situated on the Atlantic coast at the mouth of the Chesapeake Bay. Southeast Virginia's most populous city has roughly 450,000 year-round residents.

"This is the most devastating day in the history of Virginia Beach," Mayor Bobby Dyer said at a news conference with the police chief. "The people involved are our friends, co-workers, neighbors, colleagues."

Arriving in town a short time after the shooting, Virginia Governor Ralph Northam said: "This is just a horrific day."

"Our hearts ache for victims of the senseless violence that has been inflicted on the community," he told a news conference hours later.

In Washington, a White House spokesman said President Donald Trump had been briefed on the shooting and "continues to monitor the situation."

According to the Washington-based Gun Violence Archive monitoring group, Friday's shooting was the 150th mass shooting in the United States this year, defined as a single event in which four or more people are shot or killed.

Despite the scale of gun violence across the nation, gun ownership laws are lax and efforts to address the issue legislatively have long been deadlocked at the federal level.

Among Democrats, the response to the shooting was especially pointed, with many of the party's White House hopefuls weighing in on the gun violence crisis.

"Another horrific shooting shocks the nation, this time in Virginia Beach," Pete Buttigieg tweeted. "Already, this much is clear: it is unacceptable for America to remain the only developed country where this is routine. We must act."

That’s while Senator Bernie Sanders decried the influence of the National Rifle Association, a powerful lobby group that routinely calls for more guns in US society so that ordinary citizens are armed and ready to confront a "bad guy."

"Congress must listen to the American people and pass gun safety legislation. This sickening gun violence must stop," he said in a tweet.