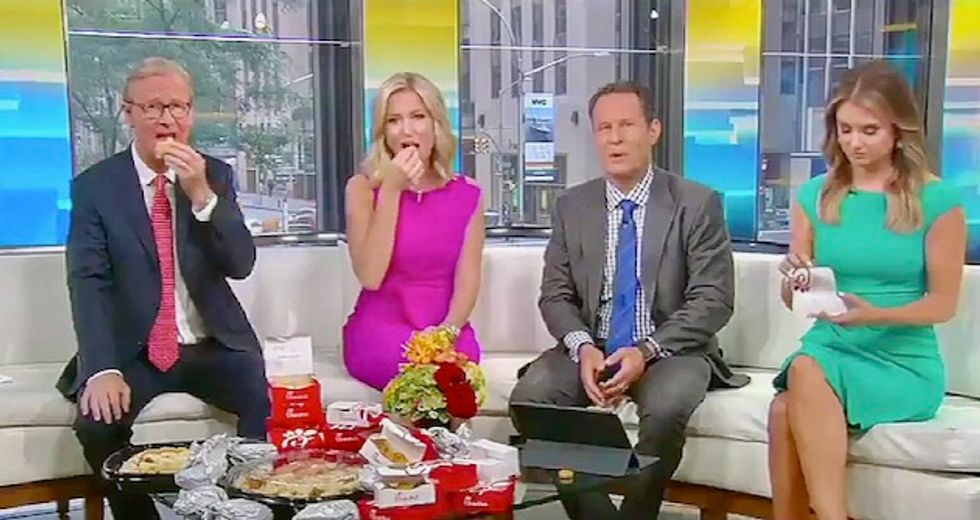 The "Fox & Friends" crew celebrated Texas Governor Greg Abbott's signing of the anti-LGBT "Save Chick-fil-A" bill into law by eating and praising the chicken fast food and defending the Christian retailer by misrepresenting opposition to the bill and to the company.

The "Save Chick-fil-A" law now makes it illegal in Texas for the government to take "adverse action" against anyone or any entity for their "sincerely held religious belief or moral conviction, including beliefs or convictions regarding marriage."

It was created in response to the San Antonio city council barring Chick-fil-A from opening a restaurant in its airport, based on the company's multi-million dollar support of anti-LGBT organizations, including an anti-gay hate group.

But that's not the story "Fox & Friends" told its viewers Wednesday morning.

"The area lawmakers said no" to Chick-fil-A opening in the San Antonio airport, co-host Ainsley Earhardt said, "because there's some controversy with this restaurant, what their beliefs are on LGBT, so they voted no."

And the issue is not the company's beliefs, but their massive multi-million dollar financial support of anti-LGBT organizations that discriminate against or work to harm LGBT people.

"Even if you disagree with the restaurant's politics it doesn't mean I'm necessarily not going to like their food," Earhardt added as she began to eat the Chick-fil-A from the table.

Co-host Brian Kilmeade was more to the point.