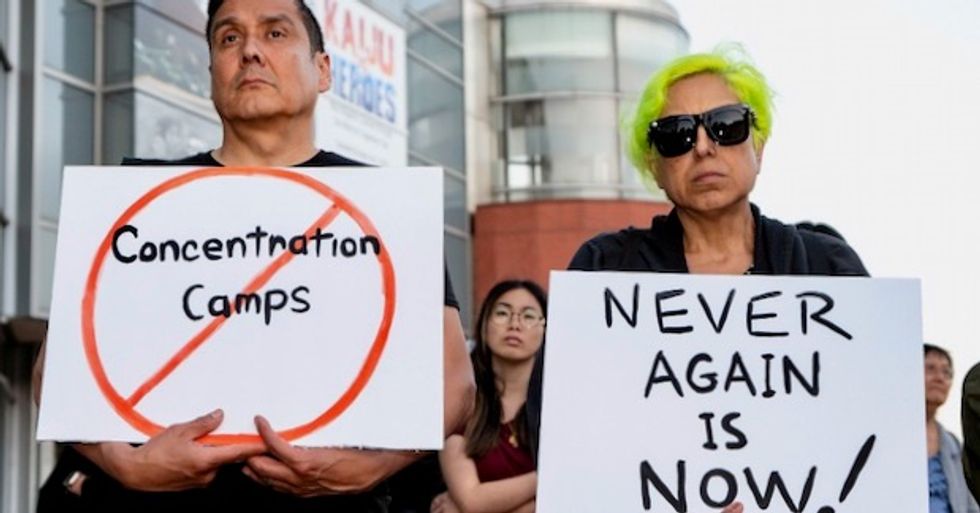 Participants hold placards during a rally in protest of the Trump Administrations plan to use the Fort Sill Army Base as a detention center for immigrant children and other Immigration Customs Enforcement (ICE) detainees. (Photo: Ronen Tivony/SOPA Images/LightRocket via Getty Images)

"The very core of Holocaust education is to alert the public to dangerous developments that facilitate human rights violations and pain and suffering."

More than 400 scholars of last century's Holocaust in Europe and the issue of genocide are calling on the U.S. Holocaust Memorial Museum to rescind its statement rejecting comparisons between the Trump administration's treatment of migrants and that of Jews and other marginalized people by the German Nazi party in the 1940s.

By suggesting that calling the administration's detention centers "concentration camps" is disrespectful to the millions who were killed by Adolf Hitler's Third Reich, the scholars wrote, the the museum is undermining its very mission of remembering the Holocaust.

"The issue of concentration camps is loaded and often weaponized in order to minimize what is being done to migrants and asylum seekers."

—Moshik Temkin, Harvard University"The museum's decision to completely reject drawing any possible analogies to the Holocaust, or to the events leading up to it, is fundamentally ahistorical," reads the open letter, which was issued Monday.

After Rep. Alexandria Ocasio-Cortez (D-N.Y.) called the detention centers where thousands of asylum seekers and immigrants are being held simply for crossing the U.S.-Mexico border "concentration camps," the museum sided with Republicans like Rep. Liz Cheney (R-Wy.), who had slammed the congresswoman for her comparison.

The museum "unequivocally rejects efforts to create analogies between the Holocaust and other events, whether historical or contemporary," a statement released late last month read.

A number of prominent Jewish Americans came to Ocasio-Cortez's defense, not only expressing support for the use of the term but saying that it is vital to avoid euphemisms to describe the facilities where thousands of people are being held in inhumane conditions and where at least 11 have died in recent months.

One observer suggested at the time that the museum's decision to distance itself from the condemnation of the Trump administration's treatment of immigrants stemmed not from its beliefs about the Holocaust but from its Trump-appointed chairman, Howard Lorber—a close friend and business associate of the president.

Regardless of the reasoning, the museum's stance left hundreds of scholars "deeply concerned," Monday's letter reads.

"The very core of Holocaust education," it continues, "is to alert the public to dangerous developments that facilitate human rights violations and pain and suffering; pointing to similarities across time and space is essential for this task."

By rejecting the term "concentration camps," the scholars added, "the United States Holocaust Memorial Museum is taking a radical position that is far removed from mainstream scholarship on the Holocaust and genocide. And it makes learning from the past almost impossible."

A number of scholars who signed the letter elaborated on their positions on social media:

The Holocaust is history that we need: not to make us feel good about the present, but to protect the future.… https://t.co/OZJUpgIrKM
— Timothy Snyder (@Timothy Snyder) 1561999312.0

"The issue of concentration camps is loaded and often weaponized in order to minimize what is being done to migrants and asylum seekers," tweeted Harvard history professor Moshik Temkin, who did not sign the letter.

"When Holocaust scholars tell you that the comparisons are apt and that they are horrified by what is happening now," he added, "you'd best put down your biases and wishful thinking and pay attention to what they're saying. They are the experts on this history."