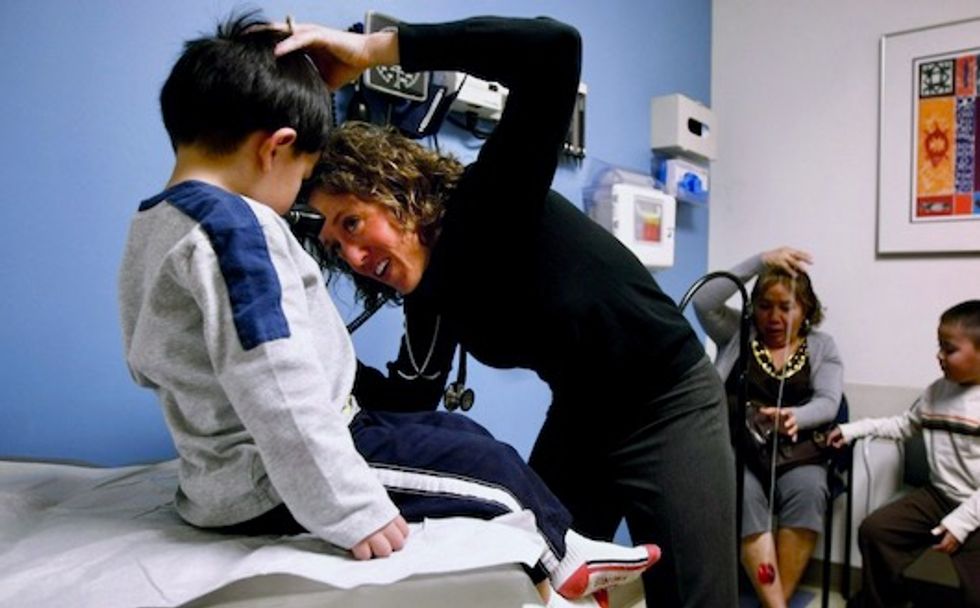 "If Democrats were serious about protecting every American's right to healthcare, this plan wouldn't even be on the table."

Progressive members of Congress are raising alarm and publicly calling out Democratic colleagues who are pushing legislation that would significantly cut funding to community health centers, which currently provide essential care to around 30 million primarily poor and rural Americans.

As the Washington Post's Jeff Stein reported Wednesday, Rep. Frank Pallone Jr. (D-N.J.) is advancing a bipartisan measure that "would provide flat levels of federal funding for hundreds of community health centers nationwide, at about $4 billion for the next four years."

"We should be substantially increasing funding. I was very, very disappointed by Democratic leadership. We will do everything we can to rectify this."

Pallone denied that his bill calls for cuts, but progressives warned that because "flat" funding would not keep up with inflation, Pallone's bill would lead to lower budgets for health clinics across the nation.

"The plan backed by Pallone, while better than letting the funding expire altogether, would amount to a nearly 20 percent funding reduction over four years for the clinics, almost certainly cutting the amount of medical, vision, dental, and mental healthcare they can provide primarily low-income Americans," Stein reported, citing Sara Rosenbaum, a health expert at George Washington University.

Sen. Bernie Sanders (I-Vt.), who has played a major role in securing and expanding funding for community health centers over the past decade, expressed outrage that Democrats would pursue legislation that could jeopardize healthcare for millions of low-income Americans.

"I was, quite honestly, stunned. It's just absolutely disastrous, and moving in the wrong direction," Sanders, a 2020 Democratic presidential candidate, said of Pallone's bill in an interview with the Post. "We should be substantially increasing funding. I was very, very disappointed by Democratic leadership... We will do everything we can to rectify this."

"The idea that the House would consider denying primary healthcare to over three million Americans through a 20 percent real cut to community health centers after 'finding' $733 billion in defense funding for the most dangerous president in our history should sicken and disgust every American," Gunnels wrote, referring to the House's passage of the 2020 National Defense Authorization Act last week. Just eight Democrats voted no.

The idea that the House would consider denying primary healthcare to over 3 million Americans through a 20% real cu… https://t.co/oHDvYNZmEO
— Warren Gunnels (@Warren Gunnels) 1563421784.0

The funding dispute, Stein reported, "could have significant consequences for the nearly 30 million people nationwide who rely on the community health clinics, which serve poor people and those without sufficient access to medical care, including in rural areas."

Khanna warned in a statement to the Post that Pallone's bill—which easily passed out of the House Energy and Commerce Committee on Wednesday—could kick "three million low-income Americans off their care" entirely.

"If Democrats were serious about protecting every American's right to healthcare," Khanna tweeted, "this plan wouldn’t even be on the table."

If Democrats were serious about protecting every American’s right to health care, this plan wouldn’t even be on the… https://t.co/zzYFDqIkcJ
— Rep. Ro Khanna (@Rep. Ro Khanna) 1563459056.0

Ocasio-Cortez told the Post that House Democrats should be using their majority to negotiate a compromise bill with the Republican-controlled Senate from a position of strength, not calling for reduced funding from the jump.

"I want us to use our majority to fight for these families—not allow a 20 percent cut," said the New York Democrat.

As Stein reported, "Lawmakers face a September deadline for the community health centers, after which their funding would begin to expire, likely leading to steep cuts."

Instead of Pallone's legislation, Gunnels said House Democrats should line up behind a bill introduced in March by Sanders and House Majority Whip Jim Clyburn (D-S.C.), which would expand funding for community health centers and provide care to over five million more Americans.

"The good news," tweeted Gunnels, "is that there's still time for the House to pass a bill by Sen. Sanders and Rep. Clyburn to expand, not cut, community health centers and provide primary healthcare to 5.4 million more Americans."

"This isn't a hard call," Gunnels added, "but we'll need to fight like hell to get it done."