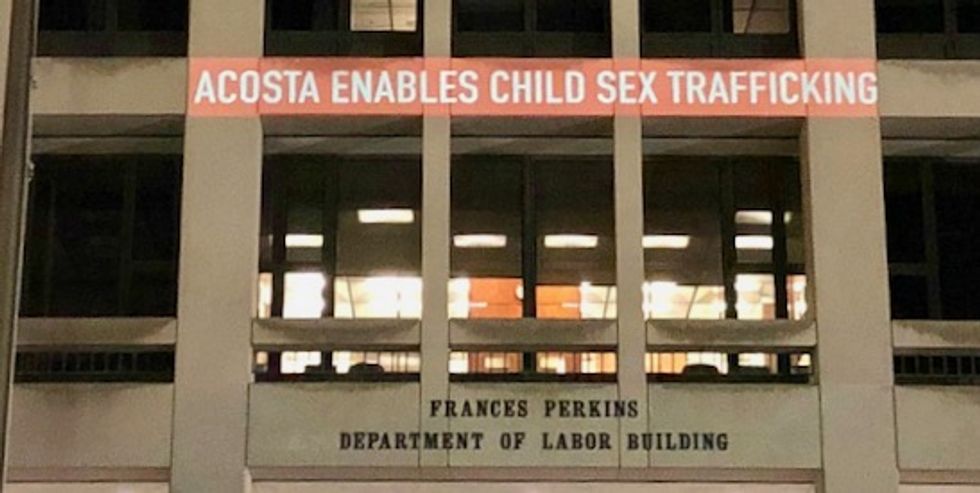 "House Democrats should... use all power at their disposal to hold Acosta accountable and investigate Donald Trump's involvement with Jeffrey Epstein," said Heidi Hess, co-director of Credo Action. (Photo: UltraViolet/Flickr)

"Acosta must step down as Labor Secretary immediately. His actions make clear he would rather protect a billionaire pedophile and sex offender than stand up for innocent children."

Hours after Labor Secretary Alex Acosta held a press conference defending his decision in 2008 to offer what critics described as a "sweetheart" plea deal to billionaire Jeffrey Epstein—who was charged this week with sex trafficking—a coalition of progressive advocacy groups Wednesday night projected messages onto the Department of Labor building condemning Acosta as an enabler of sexual predation and urging him to resign.

"Acosta endangers women and girls," "Acosta enables child sex trafficking," and "Acosta must go" read the projections, which were planned by the American Federation of Teachers, CREDO Action, MoveOn, and UltraViolet.

Heidi Hess, co-director of CREDO Action, said in a statement that Acosta "must step down as Labor Secretary immediately."

"His actions," Hess said, "make clear he would rather protect a billionaire pedophile and sex offender than stand up for innocent children."

Hess went on to urge the House Democratic majority to launch an investigation into Acosta and President Donald Trump's relationship with Epstein.

As Common Dreams reported Tuesday, House Speaker Nancy Pelosi (D-Calif.) sparked outrage by saying it is "up to the president" to probe Acosta.

"House Democrats should... use all power at their disposal to hold Acosta accountable and investigate Donald Trump's involvement with Jeffrey Epstein," said Hess.

Shauna Thomas, executive director of UltraViolet, echoed Hess's demand, calling on Congress to "open a full investigation into why child sexual predator Jeffrey Epstein was protected over the survivors of his abuse."

"That means investigating every single enabler of Epstein's abuse, from Labor Secretary Alex Acosta to President Donald Trump, and every celebrity and business mogul in between, and includes starting impeachment proceedings into Acosta, who broke the law to hand a serial pedophile a sweetheart deal."

"The American people cannot afford a president and Labor Secretary who would rather shield wealthy sexual abusers from prosecution than protect sexually trafficked children," said Thomas.