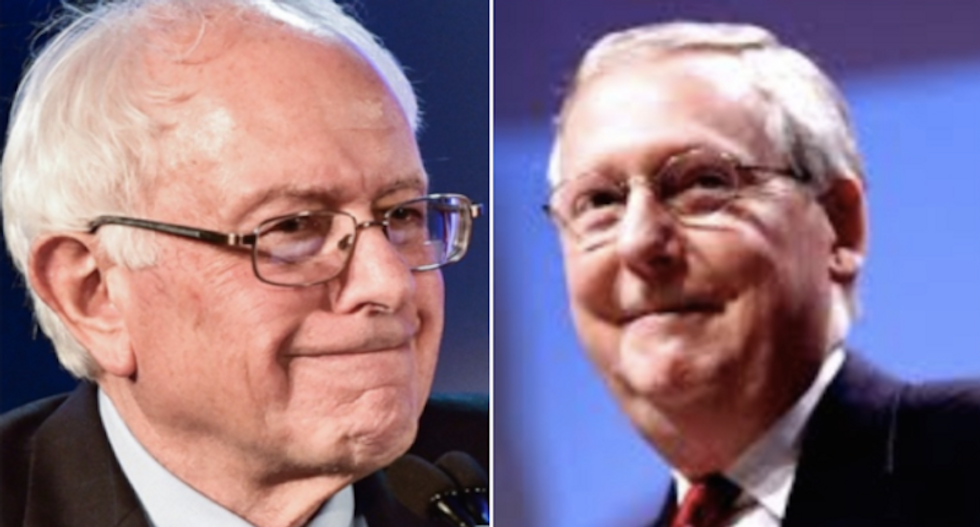 "If Senator McConnell wants to vote against that bill and explain to the people of Kentucky why he believes a $7.25 minimum wage is acceptable to him that is his prerogative," said the 2020 presidential candidate

After the Democratic-controlled U.S. House of Representatives passed a "historic" piece of legislation Thursday that would raise the federal minimum wage from its current $7.25 up to $15, Sen. Bernie Sanders immediately called on Senate Majority Leader Mitch McConnell to allow that chamber to vote on the companion bill.

"No one who has a job in America should be living in poverty. Let the Senate vote." —Sen. Bernie SandersRecalling how his original bill proposing a $15 federal minimum wage, first introduced in 2015, was at the time dismissed as an "impossible dream," Sanders in a statement thanked "a strong grassroots movement led by millions of fast food workers and the SEIU" for securing passage of the Raise the Wage Act of 2019—introduced by Rep. Mark Pocan, the Democrat from Wisconsin who co-chairs the Congressional Progressive Caucus.

Four years ago, @KeithEllison and I rallied with low wage workers for an increase in the federal minimum wage to $1… https://t.co/BFjZ3j6kRT
— Bernie Sanders (@Bernie Sanders) 1563468827.0

"Today," said Sanders, "I am proud to say that a $15 minimum wage has gone from laughable to inevitable."

With his own version of the bill languishing in the Senate, Sanders called on McConnell to "bring my $15 an hour legislation to the floor for a vote as soon as possible."

In the wake of Thursday's vote, Sanders retweeted a video he released last month calling on the GOP leader to do the same:

If the Majority Leader wants to defend starvation wages to the people of Kentucky, that is his right. But I say t… https://t.co/PE9STRuZnj
— Bernie Sanders (@Bernie Sanders) 1559995398.0

"If Senator McConnell wants to vote against that bill and explain to the people of Kentucky why he believes a $7.25 minimum wage is acceptable to him that is his prerogative," Sanders reiterated in his statement on Thursday. "But he should not deny the rest of the Senate the opportunity to vote for this bill and increase wages for 40 million Americans. No one who has a job in America should be living in poverty. Let the Senate vote."

Crossman, the Democratic nominee for attorney general this November, said the GOP commissioners had “recklessly failed to perform a duty expressly imposed by law with respect to the public servant’s office” and alleged “interference with civil rights.”

Fulton County District Attorney Fani Willis is expected to take dozens of subpoenas to a grand jury investigating the efforts by supporters of Donald Trump to overturn the election in Georgia, which was won by Joe Biden.

"As many as 50 witnesses are expected to be subpoenaed by a special grand jury that will begin hearing testimony next week in the criminal investigation into whether former President Donald J. Trump and his allies violated Georgia laws in their efforts to overturn his 2020 election loss in the state," The New York Times reported Friday.