All hell breaks loose when Denny’s manager sides with racist bikers over black women: ‘We were treated like animals’ 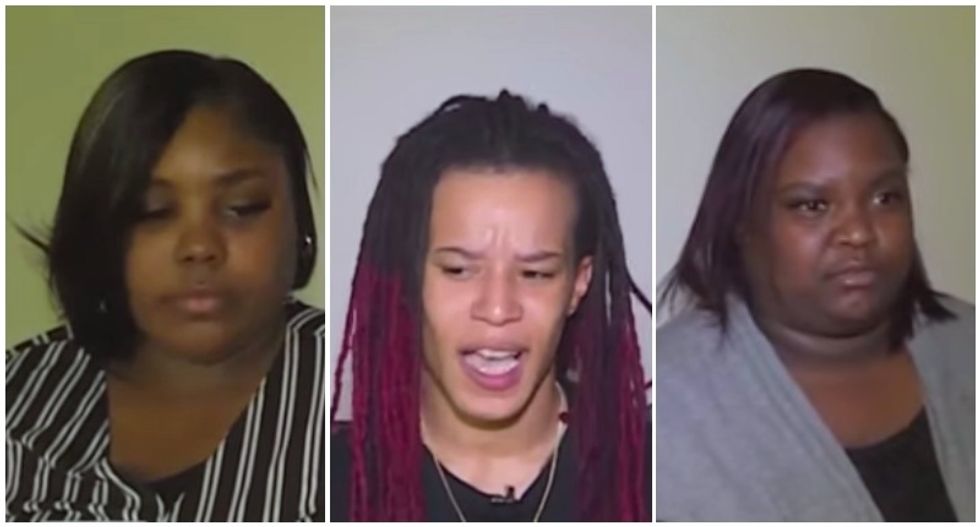 Three black women from Michigan say they were racially abused by another customer at a Denny's restaurant, and they complained the manager tried to kick them out when they complained.

They said another diner wearing a Blue Angels motorcycle jacket told a waitress to “serve them (racial slur) some T-bones,” and then all hell broke loose, reported the Lansing State Journal.

“That night, we were treated like animals,” said one of the women, 27-year-old Sasha Collins. “They treated us like we did something wrong.”

The women had been celebrating Collins' birthday Oct. 14 when they stopped at the Delta Township eatery for breakfast around 4 a.m., after going to a comedy club and then a nightclub.

“We didn’t drink at all," said 25-year-old Jennifer McEwen. "We just all went out and had a good time."

A group of four white people who had come from a biker rally were seated near the women, and one of the men began loudly uttering racial slurs "too many times to count," according to 22-year-old LaMaya McGuire.

The waitress ignored the man's comment about T-bone steaks, but Collins went to complain to the manager, Patrick Fort.

“I just walked up and asked, ‘Could you move them? And if they continue to say these racial slurs, could you asked them to leave?’" Collins said. "He said, 'No, I cannot ask them to leave. It’s a freedom of speech.’”

Collins had tried to keep her complaints quiet, but Fort followed her back to the table and loudly commented on the right to free speech -- which put them into direct confrontation with the bikers.

The black women became upset with Fort, who asked them to leave, and he refused to box up their food to go and called sheriff's deputies when they refused to leave the restaurant.

McEwan also tried to call law enforcement, and a woman at the bikers' table -- later identified as Alicia Barber, of Jackson -- punched her.

Barber has been charged with misdemeanor assault.

The women's account is largely backed up by security video recorded at the restaurant, according to the Eaton County Sheriff’s Office.

The company spokesman said the manager's actions were “completely unacceptable," and said he no longer worked for Denny's.

The women hired an attorney right after the incident took place, but now they're seeking help from the Lansing chapter of the NAACP after their lawyer backed out in a dispute over the terms of their retainer.

Their attorney had advised them not to go public, and they said Denny's ended contact with them after their lawyer quit until local media reported their claims.

They have also filed a complaint with the Michigan Department of Civil Rights, which is continuing to investigate.

"Nobody protected us, nobody helped us, nobody stood up for us," McGuire said. "It was an injustice for us to go through that because we’re black."

Denny's settled multiple discrimination lawsuits in 1994 for $54 million after black customers were refused service or made to wait longer or pay more than white customers.