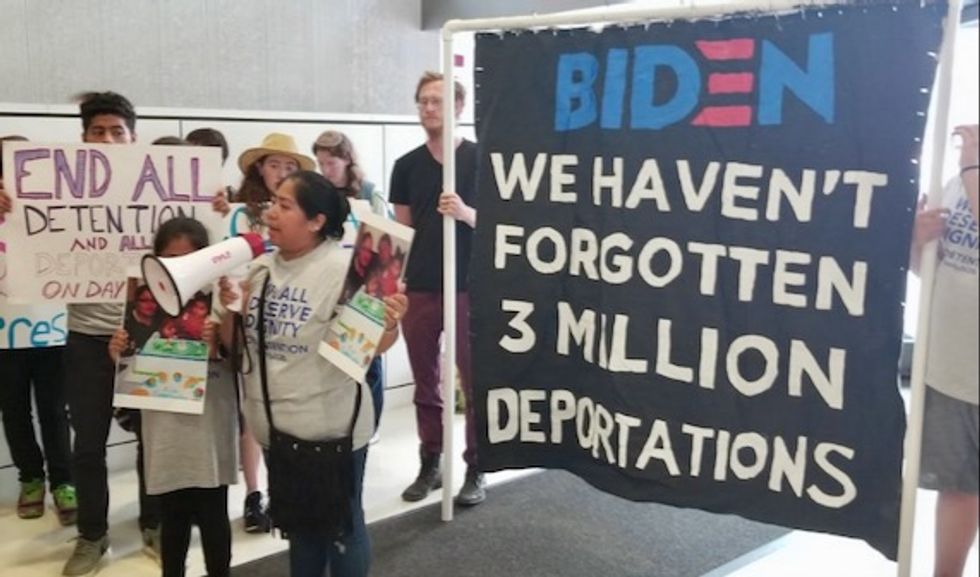 The Cosecha Movement led a demonstration at Joe Biden's campaign headquarters on Wednesday, demanding an apology from the former vice president for the separation of thousands of families who were deported by the Obama administration. (Photo: @CosechaMovement/Twitter)

"We cannot sit back and allow Biden to defend the three million deportations and the unprecedented expansion of detention that happened under his watch. We need more from the party that claims to support us."

President Donald Trump's openly xenophobic hardline anti-immigration agenda has brought the United States to a "moment of reckoning" on immigration policies that have been in place for decades, a New Jersey-based advocacy group said Wednesday as it led families whose loved ones were deported in a protest at Joe Biden's campaign headquarters.

The former vice president, the Cosecha Movement said, must apologize for his part in the Obama administration's separation of thousands of families as it deported more people than ever before in U.S. history. Biden must also commit to ending the detention and deportation of immigrants, the group added.

In a press release, the group noted that the Trump administration's separation of thousands of families, violent ICE raids, and reports of abuse and neglect in the detention centers where thousands of immigrants are in custody, have called attention to the U.S. government's treatment of migrants and asylum seekers—but stressed that the Obama administration also separated and detained thousands of families and was complicit in the country's broken immigration system.

"While Republicans scapegoated immigrants and fanned the flames of white supremacy," the group wrote, "the Obama administration failed to deliver on the promise of legalization, and instead chose to deport three million immigrants."

This "false strategy of appeasement to anti-immigrant forces," the group continued, "resulted in the meteoric expansion of detention and more deportations than ever before in our nation's history."

At least six people were arrested for occupying Biden's headquarters in Philadelphia as the Cosecha Movement held the first public action of its newly-unveiled Dignity 2020 campaign.

Arrests were just made as immigrants and allies continue to demand that @JoeBiden, and all presidential candidates,… https://t.co/5o5VEzWOTJ
— Movimiento Cosecha (@Movimiento Cosecha)1562784914.0

Six protestors are taking into custody and are expected to be processed, cited and released soon after briefly occu… https://t.co/E1AzEEBcT1
— Bastiaan Slabbers (@Bastiaan Slabbers)1562784731.0

The campaign is calling on all Democratic presidential candidates to commit, should they win the presidency in 2020, to ending all detentions and deportations; reunifying all families separated by the Trump, Obama, and other administrations, either through unjust deportations, family separations under Trump's so-called "zero tolerance" law, or the lies of immigration officials who told parents that they would see their children if they agreed to return to their home country; and granting legal status to 11 million undocumented immigrants.

The group began the campaign by addressing Biden, who last month defended the Obama administration's record three million deportations by saying President Barack Obama had done "a heck of a job" in implementing immigration policy.

"We cannot sit back and allow Biden to defend the three million deportations and the unprecedented expansion of detention that happened under his watch," said Cata Santiago, a leader of the Cosecha Movement. "We need more from the party that claims to support us. It is time [for] Biden to recognize the impact that these policies had on our families and commit to the vision put forth by the immigrant community for what dignity looks like."

There must be a moral reckoning from the Democratic party, which deported 3 million people under Trump and wrote a… https://t.co/L2Js6IF26q
— CREDO Mobile (@CREDO Mobile)1562784172.0

Trump threatened in June to deport "millions" of immigrants in pre-dawn ICE raids across the country, but backed down after criticism. Despite the president's threats, the administration has not yet surpassed Obama in the number of deportations in a single year: in 2012, Obama deported more than 419,000 people.

Trump's treatment of immigrants and asylum seekers has opened many Americans' eyes to the broken system, the Cosecha Movement wrote, and Democrats must use the current moment to demand a humane immigration system.

"Our country has reached a moment of reckoning on the issue of immigration," wrote the group. "During this primary election, it is time for the public to push the Democratic party to recognize dignity for all, and finally commit to solving the daily crisis our immigrant families have been facing for more than two decades."