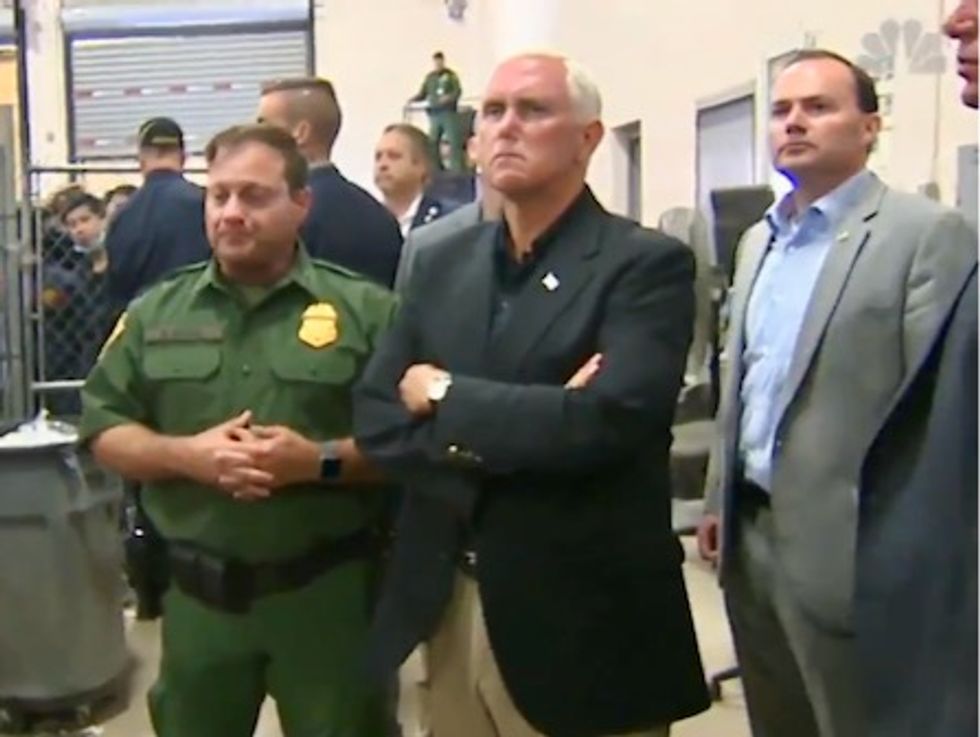 Vice President Mike Pence visited the border on Friday and blamed Congressional Democrats for the conditions there. (Image: screenshot)

"You gotta love it when Pence immediately puts complete blame for the horrors he saw on the Dems even after they threw money at monsters."

Vice President Mike Pence blamed Democrats on Friday for the overcrowding in camps used to imprison migrants during a visit to the border, an accusation that generated anger from progressives at both the White House and the Democratic congressional leadership.

"You gotta love it when Pence immediately puts complete blame for the horrors he saw on the Dems even after they threw money at monsters," tweeted journalist Lori Lou Freshwater.

In June, House Democrats passed a bill from the Senate that provided $4.6 billion to fund border security and the prisons. The legislation, which was opposed by left-leaning members of the caucus, has exposed a fissure in the party that continues to grow between the new and old guard of the party.

Conditions at the border, as Common Dreams has reported, are bad and getting worse. During his tour, Pence saw those conditions, including a room where hundreds of men were imprisoned behind fencing.

This image will go down in history. New video shows shows Mike Pence callously observing and turning his back on se… https://t.co/sSA4dtcLGF
— Shannon Watts (@Shannon Watts)1562990276.0

In the room, as The Washington Post's Josh Dawsey reported, the "stench was overwhelming."

In comments to CNN Friday, Pence said that the conditions were "the reason why we demanded that Congress provide $4.6 billion in additional support to Customs and Border Protection," and made a distinction between the funding and the origin of the crisis, which he placed, one again, at the feet of the Democratic Party.

"The time for action is now and the time for Congress to act to end the flow of families that are coming north from Central America to our border is now," Pence told CNN.

Given those remarks, MSNBC personality Chris Hayes mused, the White House might blame Democrats no matter what changes at the border.

"So even thought the House Democrats went along with the McConnell funding bill in the Senate," Hayes said on Twitter, "Pence is still running around blaming 'Democrats in Congress' for not adequately funding their detention camps."

In a tweet, Rep. Don Breyer (D-Va.) made clear that he wasn't about to accept the administration's narrative on the border and that the blame did not rest on Democrats.

"We are working to expose and stop human rights violations at the border, but everyone needs to know that Pence and Trump are making these problems much worse on purpose," Breyer said. "They separate families and detain asylum seekers in huge numbers for political reasons."

"They could stop it," said Breyer.