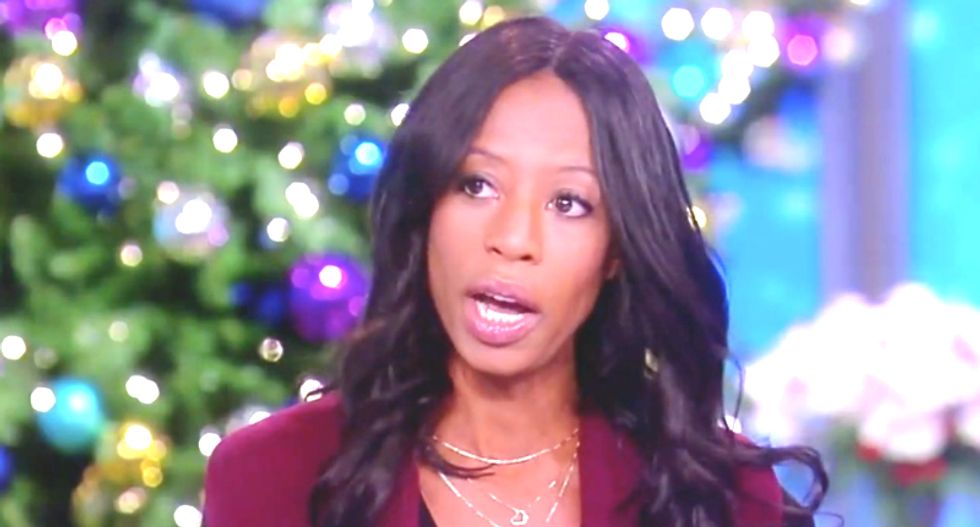 Love, who was one of only two black Republicans in Congress at the time she lost re-election in 2018, visibly squirmed over the president's words, but danced around using the term — and lashed out at the idea that she should be expected to criticize the president.

"First of all, I think the reason why you’re not seeing Republicans come out is because it’s a very icky subject to get into," said Love. "They don’t like it. They don’t want to be part of it. They would rather it just kind of go away. Frankly to me, and I think a lot of people, it’s incredibly frustrating to see these types of tweets come out because it pulls away from any positive agenda that has to happen ... it’s going to be difficult for the president to continue to talk to independents, when he continues to make people feel like they aren’t part of the American vision he’s putting out there."

"Just to be clear, do you see those tweets as racist?" co-anchor Alisyn Camerota pressed her.

"Congresswoman, have you ever had anyone tell you to go back to a country from which you came from or which your ancestors came from?" asked co-anchor John Berman.

"Oh, gosh," said Love. "The country I came from was the United States, the country I was born in."

"Mia Love said she’s frustrated, Republicans are frustrated, I’m frustrated with that interview," said Bruni. "All due respect, I have no idea why she’s dancing around calling these comments racist. She’s no longer in Congress and still seems unwilling to call out the president’s behavior for what it is. Those are racist — no, please, those were racist tweets. Republicans aren’t running away from that tweet or comments in the tweet because they are icky, they are being silent because they fear if they cross Donald Trump he will make it difficult for them to get re-elected. It’s a pure political calculation. It’s a calculation being made at the expense of civil discourse in this country and allowing Donald Trump to—"

"I see the bigger issue here," cut in Love heatedly. "The bigger issue to me is when I go out and see how the world views us, I see the world looking at us tearing each other apart. I’m sorry, don’t tell me how I should feel about what somebody says about me because I have grown up as a black woman in America my entire life. I have been taught I do not let anyone make me a victim. Do I like those comments, do I think they are helpful? Absolutely not. Am I going to let it affect me? ... Absolutely not. We are Americans."

"All due respect, I wasn’t talking about anything said about you," said Bruni. "You were asked if you thought the tweet the president sent out about the four women was racist and you said you didn’t like the word."

"I did not run away from it," said Love. "I do not like using that word. I’m not going to get into the mind of somebody."

"We didn’t say he’s a racist, just the words," said Bruni. "We just wondered if you thought the words were racist?"

"I think the words are horrible. I think that they could absolutely be seen as racist," Love said. "Again, I am not — I don’t like them. I think it’s unpresidential. I’m not apologist for the president, I’ve never been an apologist for the president. I’m a person that called him out on issues and words like this. I wish they would focus on the issues Americans care about. The word frustrated is maybe not enough. Yes, I am incredibly frustrated. I wish Congress and the United States President would work on the issues that are important to Americans today."