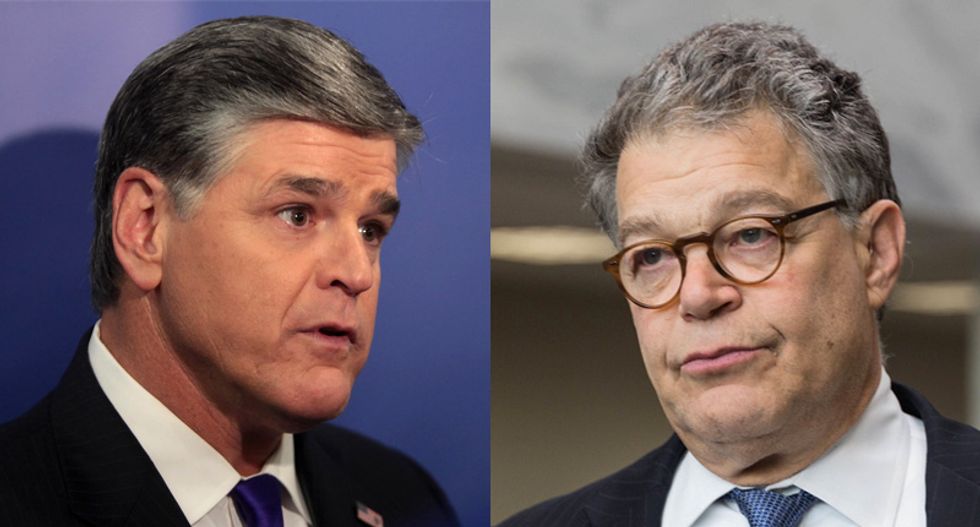 The U.S. Senate lost one of its most prominent liberals when Sen. Al Franken of Minnesota, dogged by sexual harassment allegations, announced his resignation in December 2017. Some of Franken’s defenders believed the Democratic Party was too quick to throw him under the bus; other Democrats stressed that in light of the #MeToo movement, his resignation was absolutely necessary. Franken’s political downfall is the subject of an in-depth report by the New Yorker’s Jane Mayer, who describes — among many other things — the role that Fox News’ Sean Hannity played in the media firestorm.

Franken’s career in the Senate, Mayer notes, was doomed after right-wing talk radio host Leeann Tweeden “accused him of having forced an unwanted kiss on her during a 2006 USO tour.” After that, Mayer adds, seven other women “followed with accusations against Franken; all of them centered on inappropriate touches or kisses.”

Mayer reports that the former “Saturday Night Live” star’s “undoing began with a photograph, which was released by a conservative talk-radio station on November 16, 2017.” Mayer reports that in the photo, Franken was seen on a military plane “leering at the lens with his hands outstretched toward the breasts of his USO co-star, Tweeden…. Franken’s hands appear to be practically touching her chest, and Tweeden looks to be asleep — and therefore, not consenting to the joke.”

Condemnation of Franken, Mayer recalls, quickly came from the liberal-leaning Slate (which called for his resignation in an article) as well as the right-wing media — including Fox News, where Hannity quoted the Slate piece and interviewed Tweeden (who is described by Mayer as “a friend who had been a guest on his show dozens of times”). And the alt-right Breitbart News, Mayer notes, drew attention to Slate’s article as well.

Mayer reports, “The media uproar was further heightened by an impassioned personal statement released by Tweeden’s Los Angeles radio station, KABC-AM, which provided her account of the story behind the photograph.”

Hannity, Mayer recalls, “exulted when the news broke,” relentlessly attacking Franken on both Fox News and his AM radio show. Hannity described the photo as “disgusting,” saying that the Minnesota senator had been accused of “sexual molestation” — and President Donald Trump, Mayer reports, “joined the fray on Twitter, insinuating that the photograph documented an assault in progress.”

Mayer is an incredibly thorough reporter, and her New Yorker piece features interviews with women who express a variety of views on Franken’s political downfall. Some of the interviewees Mayer spoke to are more sympathetic to Franken than others.

One of the more sympathetic is attorney Deborah Katz, who has represented sexual harassment victims. Katz has also represented Dr. Christine Blasey Ford, who accused Supreme Court Justice Brett Kavanaugh of attempting to rape her at a party when they were teenagers back in 1982.

Katz, according to Mayer, views Franken as a “cautionary tale for the #MeToo movement.” The attorney told the New Yorker, “The allegations leveled against Sen. Franken did not warrant his forced expulsion from the Senate, particularly given the context in which most of the behavior occurred — which was in his capacity as a comedian….. All offensive behavior should be addressed, but not all offensive behavior warrants the most severe sanction.”