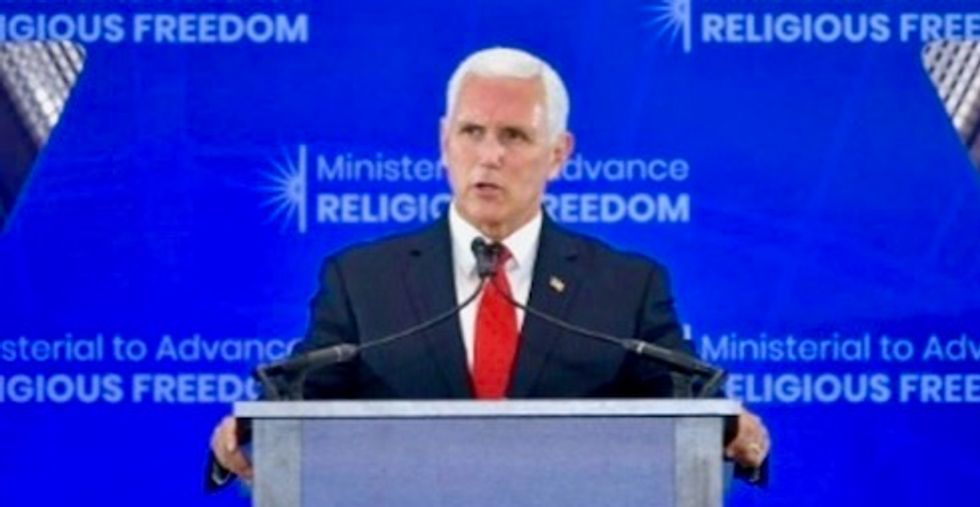 Vice President Mike Pence on Thursday urged Saudi Arabia to free Raif Badawi, a blogger jailed and publicly whipped for insulting Islam, in a rare criticism of the US ally as he vowed to champion religious freedom worldwide.

Speaking to dozens of government ministers who flew in for a conference on religious liberty, Pence offered usual US denunciations of adversaries such as China, Iran and Venezuela.

But Pence also raised the case of Badawi, whose public flogging in a Jeddah square in 2015 prompted an international uproar, as he grouped him with prisoners from Eritrea, Mauritania and Pakistan who he considered as being held for religious expression.

"In Saudi Arabia, blogger Raif Badawi is still in prison for the alleged crime of criticizing Islam through electronic means," Pence said.

"All four of these men have stood in defense of religious liberty, the exercise of their faith, despite unimaginable pressure. And the American people stand with them," Pence said.

"So today the United States of America calls upon the governments of Eritrea, Mauritania, Pakistan and Saudi Arabia to respect the rights of conscience of these men and let these men go," Pence said to applause.

President Donald Trump's administration has faced anger from rival Democrats and some fellow Republicans for not doing more to punish Saudi Arabia over last year's killing of Jamal Khashoggi, a writer and US resident who was strangled and dismembered after being lured into the ultraconservative kingdom's Istanbul consulate.

Trump instead has hailed Saudi Arabia's powerful crown prince, Mohammed bin Salman, and said that human rights concerns should be secondary due to the kingdom's ample purchases of US weapons and shared hostility toward Iran.

Canada, which granted Badawi's wife and three children asylum in 2013, has been particularly outspoken on his case, with Prime Minister Justin Trudeau calling his release a top priority.

Saudi Arabia has reacted with fury to Canada's statements, last year pulling its ambassador and severing trade ties in what was widely seen as a warning to other nations.

Badawi was arrested under Saudi Arabia's draconian cyber crime law and his website shut down after he blogged his criticism of the "mutawa," the religious police force that enforces the law.

Badawi had also called for peaceful assembly to mark a "day of liberalism," as well the end to the role of religion in politics.

He was lashed 50 times before the public in Jeddah, with witnesses remarking how he did not cry out. Authorities have repeatedly postponed the rest of his lashes.

In a letter afterward published by German weekly Der Spiegel, Badawi recalled being "surrounded by a cheering crowd who cried incessantly 'Allahu Akbar' (God is greatest)."

"All this cruel suffering... because I expressed my opinion," he wrote.

Among other cases raised by Pence, he urged Pakistan to free Junaid Hafeez, a university lecturer known for his liberal views and accused of insulting the Prophet Mohammed.

Blasphemy is an incendiary issue in Pakistan, where mere allegations of insulting Islam have sparked lynchings, although activists say many cases stem from personal disagreements.

The call to free Hafeez came days before Pakistani Prime Minister Imran Khan visits Washington on a trip in which he hopes to rebuild an often rocky relationship.

The Trump administration has generally played down human rights other than with adversaries. But it has put a high priority on religious freedom, an important issue for Trump's evangelical Christian base.

Pence also pledged to support religious freedom in North Korea -- which advocacy groups say is perhaps the world's most repressive state, with even possession of the Bible banned.

Trump has met three times with North Korean leader Kim Jong Un and voiced a fondness for him, with talks focused on ending Pyongyang's nuclear program.

"You can be confident, as President Trump continues to pursue the denuclearization of North Korea and a lasting peace, the United States will continue to stand for the freedom of religion of all people of all faiths on the Korean peninsula," Pence said.