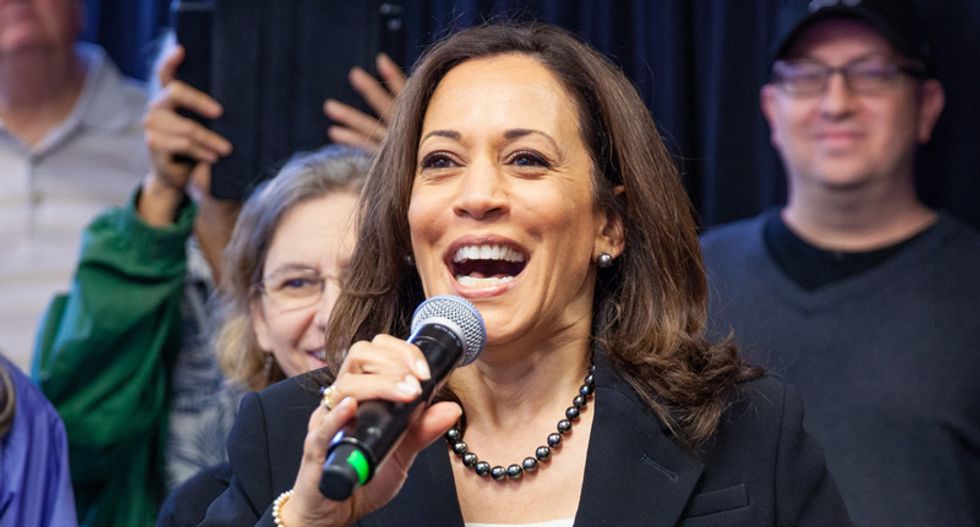 Sen. Kamala Harris continues to see a significant surge in support in polls of the Democratic presidential race in the wake of her much lauded performance at the second Democratic primary debate last week.

The California Democrat leaps to second place in the race for the Democratic presidential nomination and trails only former Vice President Joe Biden, according to the results of a Suffolk University/USA Today survey released Tuesday.

The survey of Iowa caucus-goers  shows Biden at 24 percent, followed closely by Harris at 16 percent. Sen. Elizabeth Warren of Massachusetts came in third with 13 percent, followed by Sen. Bernie Sanders of Vermont at 9 percent. South Bend Mayor Pete Buttigieg is at 6 percent, while Sens. Amy Klobuchar of Minnesota and Cory Booker of New Jersey are at 2 percent

Another poll, conducted by Quinnipiac University and released Tuesday, also spells good news for Harris. She surges into a virtual tie with Biden — and reveals the California Democrat's support from black voters also increases dramatically following her debate performance.

The survey of Democratic and Democratic-leaning voters shows Biden in first place with 22 percent, followed closely by Harris at 20 percent — a double-digit bump for her since last month’s poll.

Warren and Sanders come in third and fourth place in the poll, with 13 percent and 14 percent support, respectively. Buttigieg is in fifth, with 4 percent. With Booker earns 3 percent of voters’ support.

Biden's 2-point lead over Harris is within the poll's margin of error of plus or minus 5 percent.

The poll finds a significant increase in support for Harris and a substantial drop for the former vice president. The university's June survey had Biden at 30 percent, Sanders at 19 percent, Warren at 15 percent and Buttigieg at 8 percent. Harris came in fifth, with 7 percent.

"Round One of the Democratic debates puts Senator Kamala Harris and former Vice President Joe Biden on two different trajectories, as support for Harris surges but continues to slip for Biden," Quinnipiac University polling analyst Mary Snow said in a statement.

The Quinnipiac University poll was conducted June 28 to July 1 — just days after Harris confronted Biden over the issue of race at the Democratic primary debate.

Harris took aim at Biden over his civil rights record, as well as remarks the former vice president made last month about his "civil" working relationship with segregationist senators in the 1970s.

The freshman senator also criticized Biden's past opposition to a federal busing policy that provided transportation for black students to local schools attended by mostly white students before describing the experience of "a little girl in California" who traveled across districts as part of the second class of students bused to integrate the public schools in her county.

"And that little girl was me. So I will tell you that on this subject, it cannot be an intellectual debate among Democrats. We have to take it seriously. We have to act swiftly," Harris said.

Biden has labeled Harris' attacks as a "mischaracterization" of his views and said he was previously opposed to "busing ordered by the Department of Education” rather than busing itself. His campaign also called the senator's attacks a "low blow."

The exchange between Harris and Biden was seen a breakthrough moment for the California Democrat, who has received a surge of support and donations in the wake of her debate performance.

A third poll, conducted by CNN/SRSS and released Monday, also shows Harris in second place with 17 percent and trailing only Biden, who received 22 percent support — a 10-point decline in support for the former vice president and a 9-point increase for Harris since CNN's last poll in May.