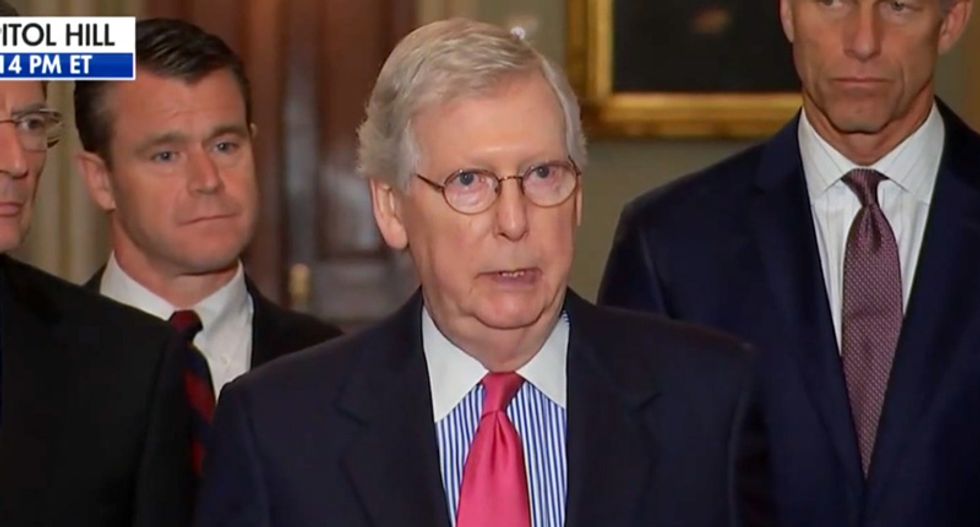 Senate Majority Leader Mitch McConnell (R-KY) on Tuesday refused to condemn President Donald Trump's racist attack against progressive members of Congress -- suggesting instead that both Democrats and Republicans alike needed to tone down their rhetoric.

During a press conference, McConnell was asked if it would be racist to use similar language towards his wife Elaine Chao, who is currently the U.S. Secretary of Transportation.

"You’re married to an immigrant naturalized citizen," a reporter noted. "If someone were to say to her, 'you should go back to your country' because of her criticisms of federal policies, wouldn’t you consider that a racist attack?"

But the Senate majority leader did not directly answer the question.

"Well, the secretary of transportation came here at age 8, legally, not speaking a word of English and has realized the American dream. I think all of us think this is a process of renewal that has gone on in this country for a very long time, and it's good for America, and we ought to continue it."

Reporters continued to press McConnell over whether Trump should use phrases such as "go back to where you came from" and whether it was racist.

"As I said, legal immigration has been a fulfilling of the American dream. The new people who come here have a lot of ambition, a lot of energy. They tend to do very well and invigorate our country. My wife is a good example of that," McConnell said.

He also refused to say whether he would ever use the phrase "go back to where you came from" himself.