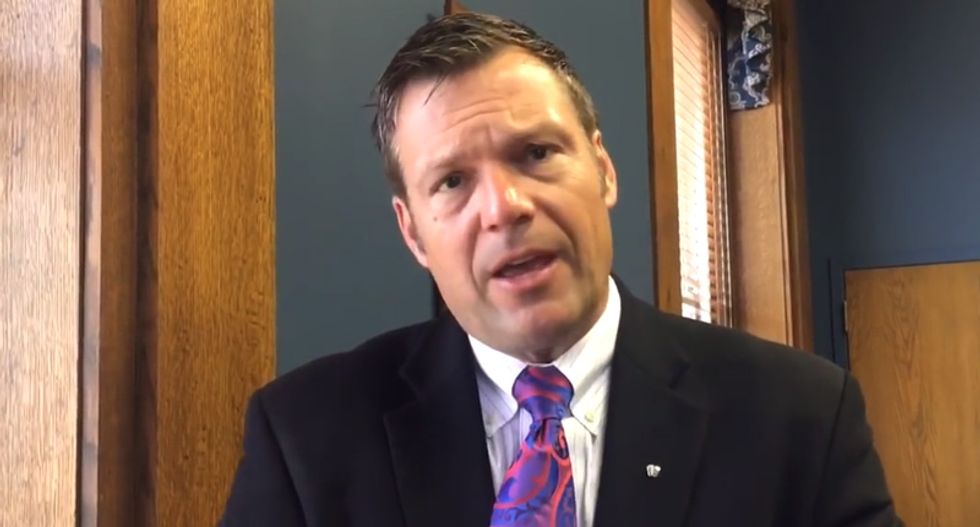 Republican Kris Kobach is known for his epic losses in most elections he has run. It's for that reason that Senate Majority Leader Mitch McConnell's PAC is trying to shame him out of running for the Kansas Senate seat.

According to Jonathan Weisman, deputy Washington editor for The New York Times, the McConnell team doesn't think Kobach has a chance to win, even in the conservative state.

"Kansas Republicans deserve a nominee who can win. [Senate Leadership Fund's] only objective is ensuring Pat Roberts' Senate seat doesn't fall into the hands of Chuck Schumer and DC Democrats. It is imperative Republicans put our best foot forward in Kansas," McConnell's fund said in a statement.

.@Senate_Fund not happy about Kobach: "Kansas Republicans deserve a nominee who can win. SLF's only objective is en… https://t.co/BGn6lfHPqr
— Jonathan Weisman (@Jonathan Weisman) 1562609803.0

Sen. Pat Roberts (R-KS) announced that he would not seek reelection in 2020, setting up a flurry of Republicans eager to vie for his spot. Among them was far-right conservative Kobach, who's made a name for himself opposing voting rights, immigration and other major issues.

It was recently revealed that President Donald Trump's administration was concerned about Kobach's ties to white supremacy. Vetting documents from the transition team called it a "red flag" and urged asking him if he was willing to denounce white supremacists. According to insiders, Kobach's clout is falling, even among Trump's team.