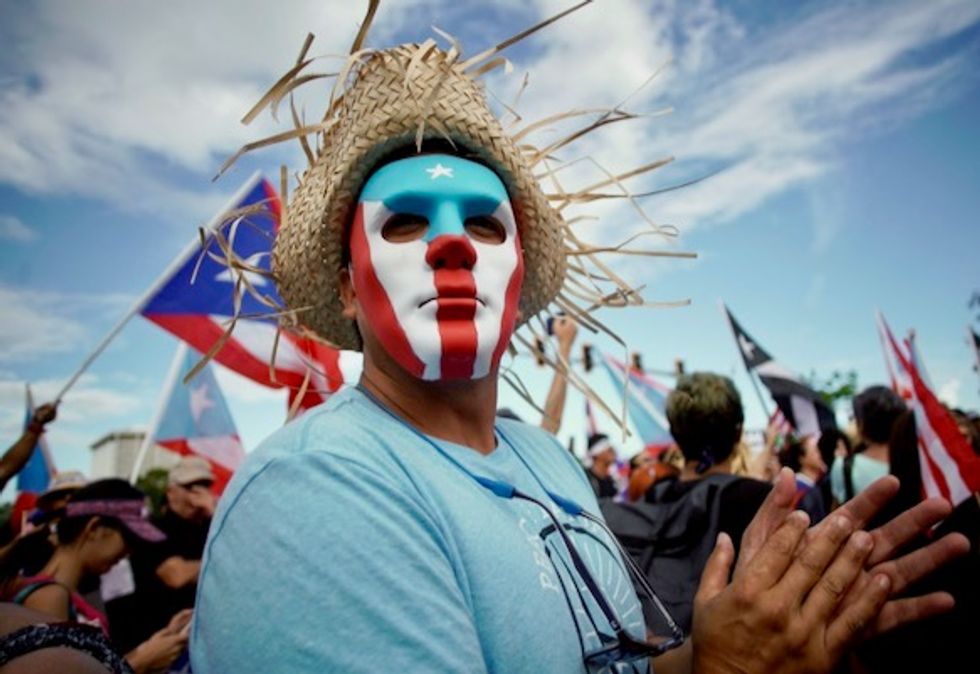 Angry protesters blocked the main road in Puerto Rico's capital on Monday as they launched what was expected to be the largest yet of a wave of demonstrations seeking the resignation of the US territory's embattled governor.

Marching under sunny skies in San Juan, the demonstrators sang, chanted, danced and carried the territory's red, white and blue flag with a lone star.

Altogether, hundreds of thousands were expected to turn out.

Puerto Ricans are up in arms over alleged corruption involving money meant to be for victims of Hurricane Maria in 2017, which left nearly 3,000 dead.

They are also upset about the recent release of text chats in which Governor Ricardo Rossello and other male government officials make fun of journalists, gays and hurricane victims, among other people.

Rossello ceded somewhat on Sunday, saying he will not seek reelection next year and step down as leader of his party. But he refused to resign from his post as governor.

"I have listened, and I am listening to you today," Rossello said in a video posted on Facebook. "I have made mistakes and I have apologized."

But protesters said they want more.

"It is not enough. He should surrender power to new leaders," Isham Rodriguez, 36, said as he banged pots together while walking in Monday's protest march.

"The governor has trampled on the rights of our country."

AFP/File / Brendan SmialowskiPuerto Rico's Governor Ricardo Rossello has said he will not seek reelection next year, but so far has refused to resign

Pop singer Ricky Martin, who is gay, Puerto Rican and one of those ridiculed in the Rossello chats, also rejected the governor's gesture and said he would take part in the protest.

"Ricardo Rossello, you are not only cynical, you are Machiavellian," Martin wrote on social media. He urged lawmakers in Puerto Rico to begin impeachment proceedings against the governor.

Rossello had said in March that he would seek reelection in polls scheduled for November 2020, but reversed that position on Sunday.

He also said as lawmakers study the possibility of impeachment that he would face any eventual proceedings "in a responsible manner."

Former governor Alejandro Garcia Padilla told Telemundo that Rossello "is buying time to see if the protests die down."

On Sunday, hundreds of people gathered in front of the governor's residence, chanting slogans such as "They will not stop us" and holding signs that said "Ricky resign."

"You have to go... to make change, you have to resign and have another, more capable person take your place," protester Jose Maldonado told AFP.

Police fired tear gas at a crowd last week after a fire broke out near the government headquarters. Five protesters were arrested.

Puerto Rico was already in dire straits even before Hurricane Maria, which laid bare the disastrous state of its electrical grid.

An economic crisis prompted the territory to seek protection from creditors under US bankruptcy law.

Budget cuts -- which, among other actions, forced the closure of schools -- prompted many Puerto Ricans to flee the island.

Combined with the post-hurricane exodus from the island, Puerto Rico lost four percent of its population.