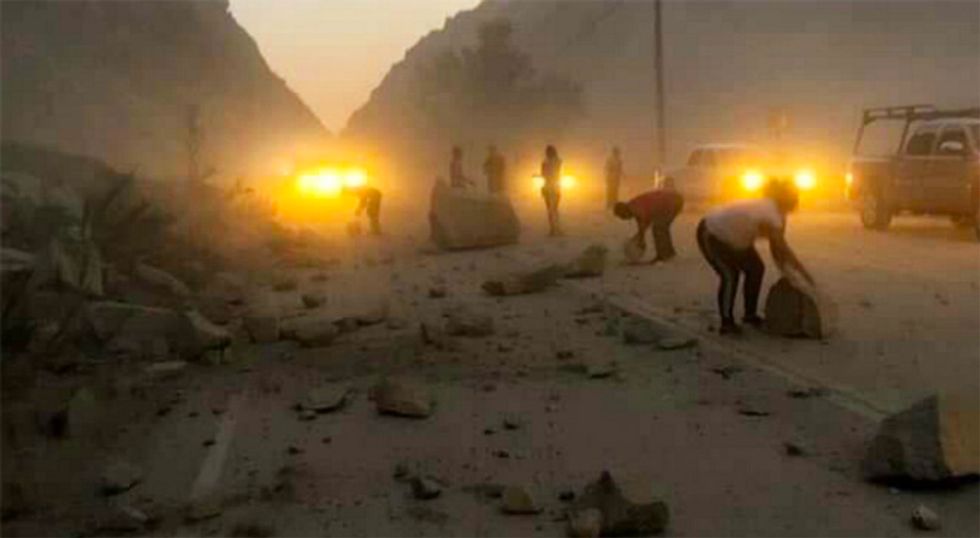 Just a day after a massive earthquake struck Southern California, a 7.1 magnitude temblor rattled the region Friday night—reportedly "cracking buildings, setting fires, breaking roads, and causing several injuries," as well as eliciting warnings from seismologists that aftershocks could follow for days, weeks, or even years.

Friday's earthquake, which was five time bigger than the one that hit the area on Thursday and the region's strongest in two decades, "spawned more than 1,400 smaller quakes—the largest registering at a magnitude of 5.0," according to CBS Los Angeles.

The Los Angeles Times reported that the latest earthquake caused damage "in and around Ridgecrest and Trona, two Mojave Desert towns shaken by both quakes," and it "was felt as far away as Phoenix, Las Vegas, Baja California, and Reno."

Thursday's 6.4 magnitude quake "was a foreshock," Lucy Jones, a seismologist at the California Institute of Technology and a former science adviser at the U.S. Geological Survey, explained on Twitter. Friday's quake was "on the same fault as has been producing the Searles Valley sequence. This is part of the same sequence."

According to the AP:

Aftershocks from the new main quake could occur for years, Jones said.

However, the quake was unlikely to affect fault lines outside of the area, she said, noting that the gigantic San Andreas Fault was far away.

The quake struck at 8:19pm and was centered 11 miles (18 kilometers) from Ridgecrest in the same areas where the previous quake hit.

"These earthquakes are related," Jones said, adding that the new quake probably ruptured along about 25 miles (40 kilometers) of fault line and was part of a continuing sequence.

NBC Los Angeles reported Saturday that officials in both counties were responding to cracked buildings and injuries, and "Urban Search and Rescue teams from L.A. and Orange counties were being deployed to Kern County to help with the damage there as they deal with a backlog of calls."

May Boeve, executive director of the environmental advocacy group 350.org, pointed out in a statement Saturday that "California has for the last few years faced the catastrophic effects of climate change more than ever before in the form of severe wildfires."

"These earthquakes will cause even further devastation to communities already trying to recover from losses," Boeve said. "We call on Governor Newsom, the State of California, and the federal government to act immediately to ensure that Californians are safe from further destruction. Furthermore, we call on California to set an example for the rest of the country by taking bold action necessary to limit climate destruction."

Residents and reporters shared photos and videos of Friday's earthquake and the resulting damage on social media:

A new day is dawning here in #Ridgecrest after the 7.1M #earthquake. Just beginning to walk one of the neighborhood… https://t.co/ixtJhfAKqI
— Sara Sidner (@Sara Sidner) 1562416222.0

Government agencies also posted updates and advice for how residents should respond to anticipated aftershocks: