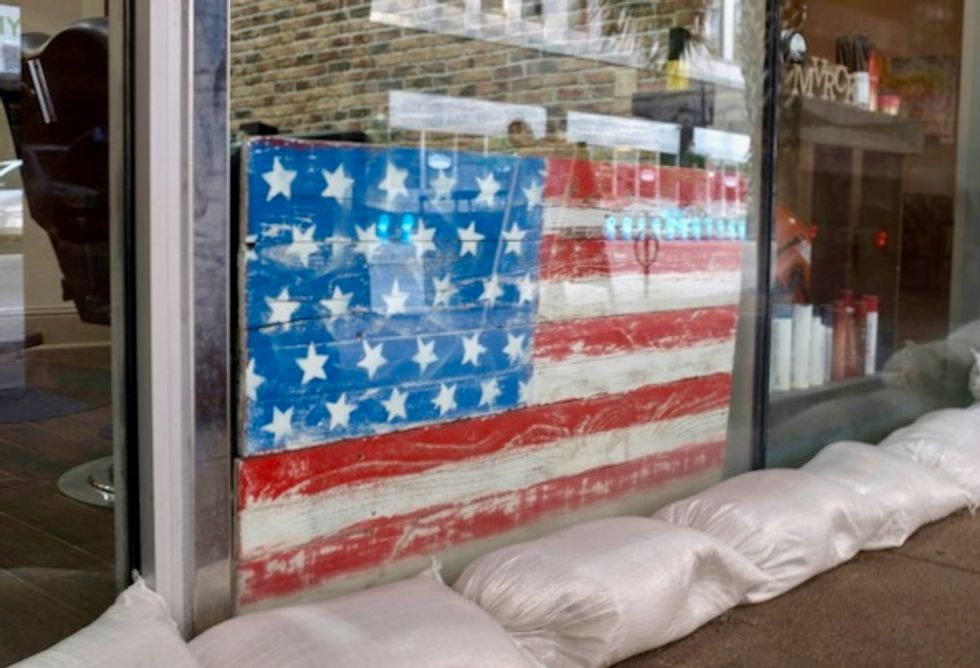 Sandbags protect a barber's shop in New Orleans as the Gulf Coast braces for the arrival of Tropical Storm Barry, expected to strengthen to a hurricane in the coming hours AFP / Seth HERALD

Evacuations ramped up Friday across coastal Louisiana as the southern US state -- including its main city New Orleans -- braced for a potentially disastrous deluge from Tropical Storm Barry, which threatens to strengthen into a hurricane.

The large storm in the Gulf of Mexico chugged towards land, bringing heavy rains, a storm surge and flooding that pose a threat reminiscent of 2005's deadly Hurricane Katrina.

Thousands packed up and left their homes as floods hit low-lying areas like Plaquemines Parish, where road closures left some communities isolated as they braced for Barry's arrival.

By mid-day Friday the storm was packing winds of 65 miles (100 kilometers) per hour, nine mph shy of hurricane strength. It was expected to reach hurricane strength late Friday or early Saturday as it closed in on the coast, the National Hurricane Center (NHC) said.

Dozens took shelter in Plaquemines's Bell Chase auditorium, while others headed inland to stay with friends or relatives and avoid what the NHC called "life-threatening flooding" to coastal and river areas.

Governor John Bel Edwards said New Orleans was well prepared to withstand the storm, and the levees protecting it were not expected to be overtopped.

"But this is going to be a very, very significant rain event across most of Louisiana," he told CNN. "This is going to impact just a huge swath of our state."

Some Plaquemines residents were battening down to ride out the storm, despite mandatory evacuation orders.

"We've stayed for some pretty strong storms and we shouldn't have," said Keith Delahoussaye, a 60-year-old mechanic, at his trailer home in Port Sulphur.

But he was keeping a close eye on the level of the Mississippi River nearby. "If we see the water rising here, we'll leave," he said.

"I'd say they fear it every time," said Brown, 58, who survived Katrina and was staying behind to look after the medical center. He said "it would be devastating" if the river breached the levee.

"They say it's going to get rough," he said, adding that dozens, perhaps hundreds, of people were ignoring evacuation orders and hunkering down in "swamp camps" in the bayou, accessible only by boat.

President Donald Trump declared a state of emergency Thursday and implored residents to prepare their homes and heed the directions of officials.

The Department of Homeland Security (DHS) said it would temporarily halt immigration enforcement activity in areas subject to the state of emergency.

It said the Immigration and Customs Enforcement (ICE) agency, which is to begin sweeping operations nationwide to detain and deport illegal immigrants, would not target migrant families evacuating during the storm.

The level of the Mississippi River, already swollen from historic rains and flooding upstream in the Midwest, was at 16 feet (4.9 meters) in New Orleans late Thursday, one foot shy of flood stage.

With storm surges of two to four feet projected, the river could breach the 20-foot-high levee system protecting the city of 400,000.

AFP / Seth HERALD Sandbags block a road ahead of the arrival of Tropical Storm Barry on July 12, 2019 in Venice, Louisiana.

The NHC upped its projections of Barry's rainfall totals to 10 to 20 inches (25 to 50 centimeters), with up to 25 inches in some areas.

"Flash flooding and river flooding will become increasingly likely, some of which may be significant," it said.

Plaquemines officials said they were not anticipating breaches, although in Venice floodwaters have already closed the highway.

Residents and business owners in New Orleans were laying down sand bags and boarding up windows. City officials have set up shelters for residents.

Pedi-cab driver Grace Hack, 25, was trying to decide whether to stay or seek shelter with friends in Atlanta.

"It seems like today is the window for decision-making and evacuation," she said.

The governor authorized the mobilization of up to 3,000 members of the National Guard.