'Tiny Pricks Project': The US artist stitching together Trump quotes 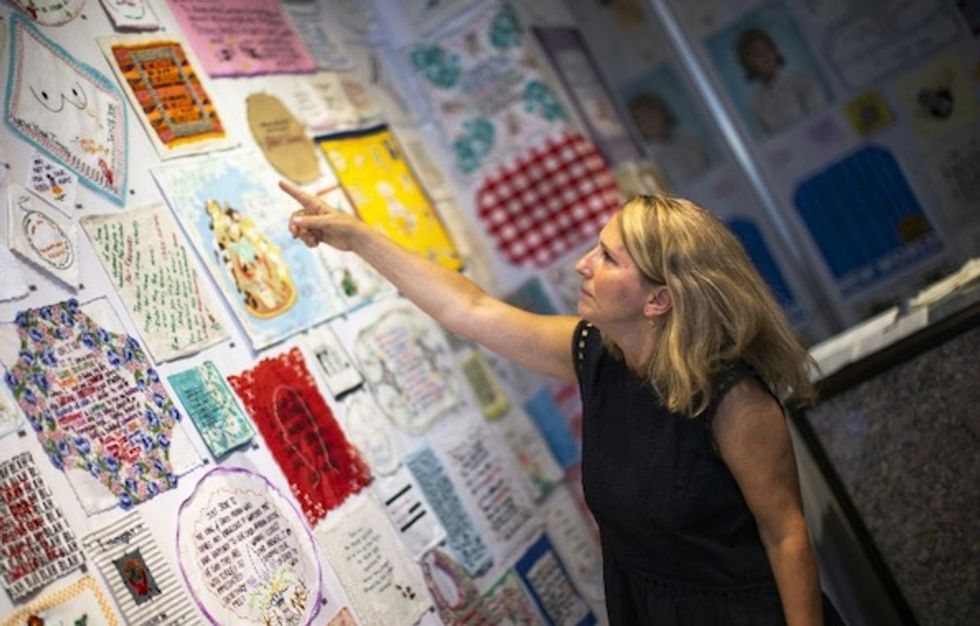 Textile artist Diana Weymar points to some of her "Tiny Pricks" project pieces at Lingua Franca store during a interview with AFP, on July 25, 2019 in New York City AFP / EDUARDO MUNOZ ALVAREZ

"Drain the swamp." "Such a nasty woman." "Crooked Hillary." An American artist has found a novel way to record President Donald Trump's most outlandish comments for posterity: through embroidery.

Diana Weymar is inspiring hundreds of women from around the world to channel their feelings toward Trump by sewing quotes of his into old textiles, including doilies, baby bibs and even underwear.

The result is the "Tiny Pricks Project," a 900-strong collection of colorful needlework pieces featuring Trumpisms, many of which are currently on display at an exhibition in New York.

"This is a creative way of dealing with the madness, which I think is hard to find," Weymar, 50, tells AFP.

AFP / EDUARDO MUNOZ ALVAREZ Diana Weymar's project to embroider US President Donald Trump's most outlandish statements, seen outside the Lingua Franca store in New York, began in 2018 when she stitched "I am a very stable genius" onto a cloth

"I think a lot about this project as pricking your conscience," she says, explaining the title. "And of course there's a reference to other kinds of pricks, umm other meanings," Weymar adds, laughing.

It all started in January last year when she stitched "I am a very stable genius" onto an old cloth of her grandmother's and posted it on Instagram.

Weymar received an overwhelming response, so she started to sew one or two a week but quickly found that she couldn't keep up with the rate at which Trump delivered outrageous statements.

She held workshops and invited other stitchers to send her their attempts. Weymar has completed around 450 items herself and received the same number again, including from France, Britain and Australia.

AFP / EDUARDO MUNOZ ALVAREZ American artist Diana Weymar embroiders the statements of President Donald Trump, including this work that shows the quote "I could stand in the middle of 5th Avenue and shoot somebody and I wouldn't lose voters" stitched on a cloth

For many of the participants, all of which have been opponents of Trump, it is a cathartic process and a way to protest.

"It does inspire me to want to do it because, you know, you feel so helpless and frustrated at the current state of the nation," Rebecca Gerstung, a visitor to the exhibition, tells AFP.

It's "putting something terrible into something beautiful and using the needle to stab probably helps the anger!" the 45-year-old adds.

The collection contains some of Trump's most oft-used phrases such as "Witch hunt!" and "No collusion."

"I want great climate," reads another, stitched onto images of flowers.

Some of Trump's high-profile controversial comments about women feature more than once, including "Grab 'em by the pussy" and "You're disgusting," a reference to his alleged response in 2011 when a lawyer left a deposition to pump breast milk.

Weymar, based in Canada, is reluctant to call it an anti-Trump exhibition, describing it as "a record" of what he has said, and would welcome items from supporters of the president.

"It hasn't happened yet but I think it would be interesting to see what those pieces look like next to pieces made by people who don't support his policies," she says.

Weymar wants to collect 2,020 pieces by the 2020 presidential election and hopes they could even influence how people vote.

"I hope the collection will be large enough to travel to swing states," she says.