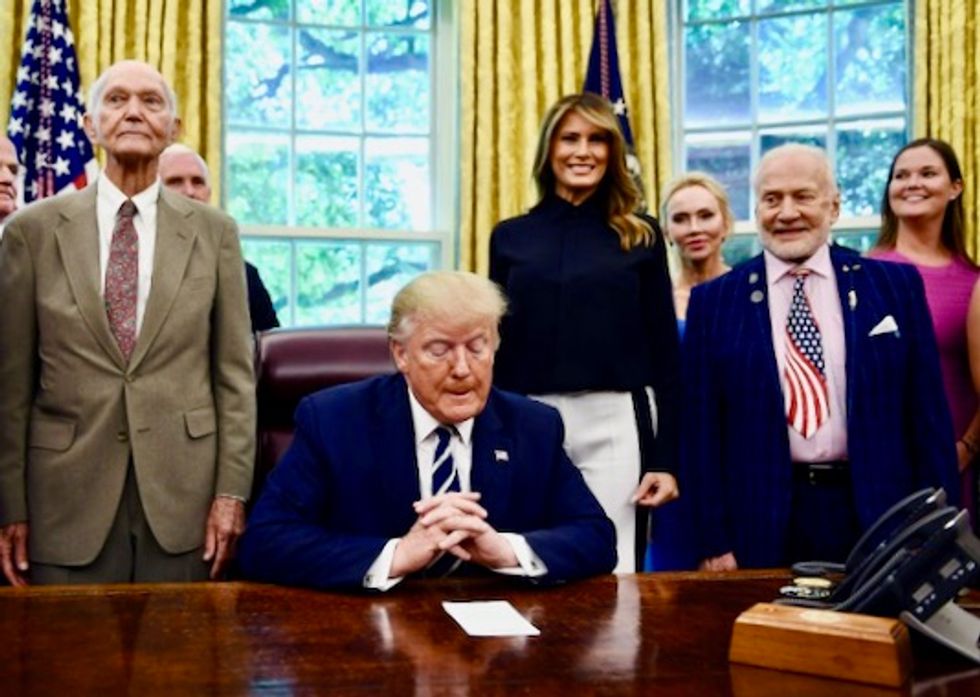 President Donald Trump welcomed surviving Apollo 11 crew members Buzz Aldrin and Michael Collins to the White House Friday, using the occasion to tell his space chief he would prefer to go straight to Mars without returning to the Moon.

It is a theme he had touched upon earlier this month in a tweet, and this time drew on the support of the two former astronauts, who are taking part in celebrations marking the 50th anniversary of their mission, to make his case to NASA administrator Jim Bridenstine.

"To get to Mars, you have to land on the Moon, they say," said Trump, without looking convinced.

Bridenstine launched into a well-rehearsed summary of NASA position: Earth's natural satellite is the right setting to perfect the technology needed to keep humans alive for long periods elsewhere, and will be a gateway for launching missions deeper into the solar system.

Trump then turned to his right to ask Collins what he thought.

"It seems to me Mars direct, who knows better than these people?" replied Trump, forcing Bridenstine onto the defensive once again.

The president mused that appointing Bridenstine had not been "that easy of a decision for me" and that he had not always supported Trump when he was a Republican congressman.

But Trump ultimately expressed his confidence in the administrator, telling Bridenstine: "You've done a fantastic job."

"Sir, I appreciate that," replied Bridenstine.

Later, Trump asked Aldrin to weigh in with his thoughts on the state of US space exploration.

"Frankly, I've been a little disappointed over the last 10 or 15 years," said Aldrin, noting progress had slowed and that despite having the premier technology, the US could not currently achieve lunar orbit.

Trump then turned to Bridenstine and asked: "How do you feel about that, Jim?"

As Bridenstine explained work being done on the Orion crew capsule, Trump said: "We'll I'd like to have you also listen to the other side.

"Because some people would like to do it a different way. So you'll listen to Buzz and some of the other people."

Earlier, the president had hailed his administration's efforts to reinvigorate space exploration, declaring: "NASA's back."

With the Apollo 11 Moon landing, the US achieved the ultimate victory in the Space Race after losing the initial heats to the Soviet Union, which was first to put a satellite and then a man in space.

The undertaking, announced by president John F Kennedy in 1961 and partly spurred by the Bay of Pigs crisis, involved enormous spending rivaled in scope only by the construction of the Panama Canal and the Manhattan Project.

It was a resounding achievement not just from a technical perspective but also diplomatic, as the two super powers jostled for global prestige in the Cold War.

Trump has relaunched the race to re-conquer the Moon -- this time with the first woman -- and to journey onwards to the Red Planet.

But the deadlines -- 2024 and 2033 respectively -- appear unrealistic and have caused turbulence within the space agency.