Trump's Medicare chief: 'I view a public option and Medicare for All as equally dangerous' 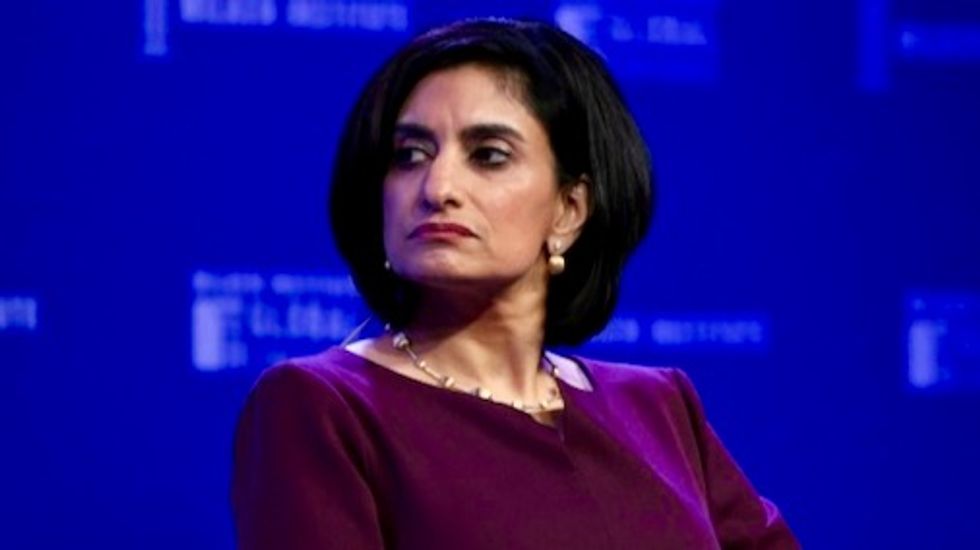 Seema Verma, Administrator for the Centers for Medicare and Medicaid Services, participates in a panel discussion during the annual Milken Institute Global Conference at The Beverly Hilton Hotel on April 29, 2019 in Beverly Hills, California. (Photo: Michael Kovac/Getty Images)

And so, ask progressive advocates for single-payer solution, "Why would we settle for half-measures when the reform we need is just as plausible?"

Seem Verma, President Donald Trump's administrator for the Centers for Medicare and Medicaid Services (CMS), came out swinging on Monday against the public option—a plan backed by some centrist Democratic presidential contenders—calling it and Medicare for All "equally dangerous."

Verma's remarks calling for an expansion of the current for-profit healthcare system came during a keynote speech at the Medicare Advantage Summit in Washington, D.C.

They are unsurprising, given her record of seeking to strip away healthcare "protections and provisions for vulnerable people," and, more recently, calling a single-payer plan like Medicare for All "bad" and "scary."

She expressed concern over "the proposals we have seen to upend healthcare in America, particularly Medicare for All and the public option." Picking up on an accusation she's levied before, Verma said, "These proposals are the largest threats to the American healthcare system."

A Medicare for All system, she falsely asserted, would boot every American "into a system where Congress and bureaucrats make decisions about their care." Repeating the administration's narrative, Verma said Medicare for All would "harm seniors' access to care."

"I view a public option and Medicare for All as equally dangerous," she said.

According to supporters of Medicare for All, the stated opposition by Verma—like that from Republicans, corporate interests, and even centrist Democrats like 2020 candidate Joe Biden—shows that it makes no political sense to fight for the less transformative public option when a true single-payer plan is achievable.

As the Physicians for National Health Program put it:

Verma framed potential passage of a public option, a plan put forth by Biden, as tantamount to passing a single-payer system.

Access will be compromised for patients, and reimbursement cuts in the public plan will shift more pressure to employer-sponsored plans to make up the difference, driving up costs for 180 million Americans with private insurance. Make no mistake—the public option is a Trojan horse with a single payer hiding inside. It would use the force of government price setting to crowd private insurers out of the marketplace altogether, and achieve the true policy goal of a government-run single payer healthcare system.

Those comments echo industry talk points like the ones put out by the Partnership for America's Health Care Future.

In a statement last week in response Biden's proposal, PAHCF's executive director Lauren Crawford Shaver said, "Unfortunately, Vice President Biden's proposal for a new government insurance system through a 'public option' would undermine the progress our nation has made and ultimately lead our nation down the path of a one-size-fits-all healthcare system run by Washington."

The corporate Democrat-aligned group has been waging a propaganda blitz against a single-payer system, though, as Public Citizen recently noted, they are not alone in their efforts, with other groups recently boosting their spending on such efforts as well.

Those efforts, though, seem to have done little to dampen voters' enthusiasm for ditching the current for-profit system.

A straw poll released Monday by Democracy for America showed that Medicare for All was one of two top priorities—along with the Green New Deal—among the group's more than one million progressive members heading into the 2020 presidential election. It has broadbacking as well; other polls have shown a majority of Americans supporting such a healthcare system.