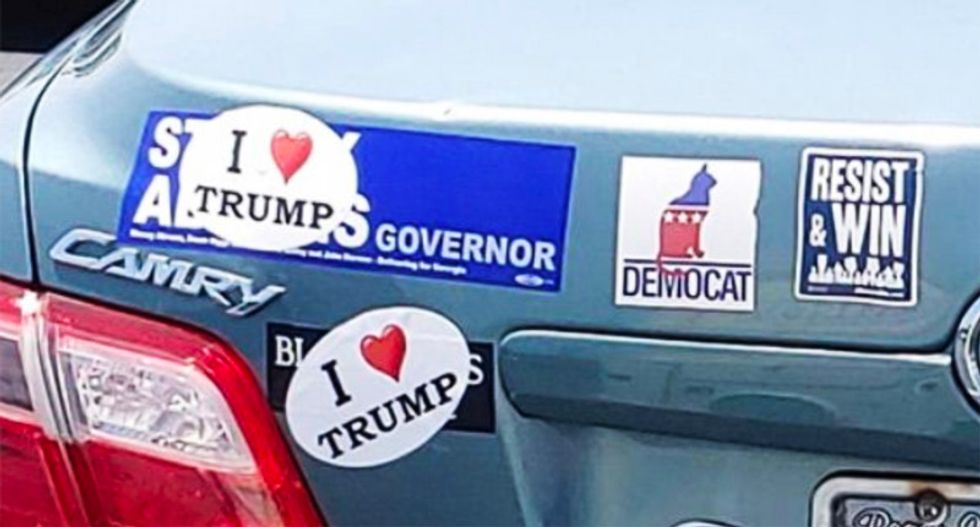 According to a report in the Gwinnett Daily Post, an overzealous fan of Donald Trump is facing multiple charges -- including stalking -- by a local woman for   plastering her car with Trump stickers, harassing her and then following her in his work vehicle.

Sharon Wood of Lawrenceville, who is the vice-chair of the Gwinnett County Democratic Party, admitted that the back of her car is covered in stickers supporting liberal causes, which made her a target for one of President Trump’s boosters.

Leaving a Publix store on Monday afternoon she found someone had put “I (heart) Trump” stickers on her car, covering other stickers supporting Stacey Abrams and the Black Lives Matter. Choosing to remove them she was accosted by the unidentified man who called her a "traitor."

"I got in my car and left and he immediately started following me. That’s when I stopped being annoyed and started being scared,” she continued, adding that he chose to not go home and pulled into another parking lot, which the man in his work van could not enter -- choosing to honk at her as he drove away.

Wood said that she called the business number listed on the truck only to have her accused stalker answer and tell her, "‘Why don’t you complain to Stacey Abrams?“

After news of the incident spread on Tuesday, the Post reports that the website and Facebook page for the company listed on the van was taken down with business’ status changed to “Permanently Closed” on Google.

Wood, in turn, reported the incident to the police who are investigating the driver who could be facing charges of simple assault, criminal trespass and misdemeanor stalking.