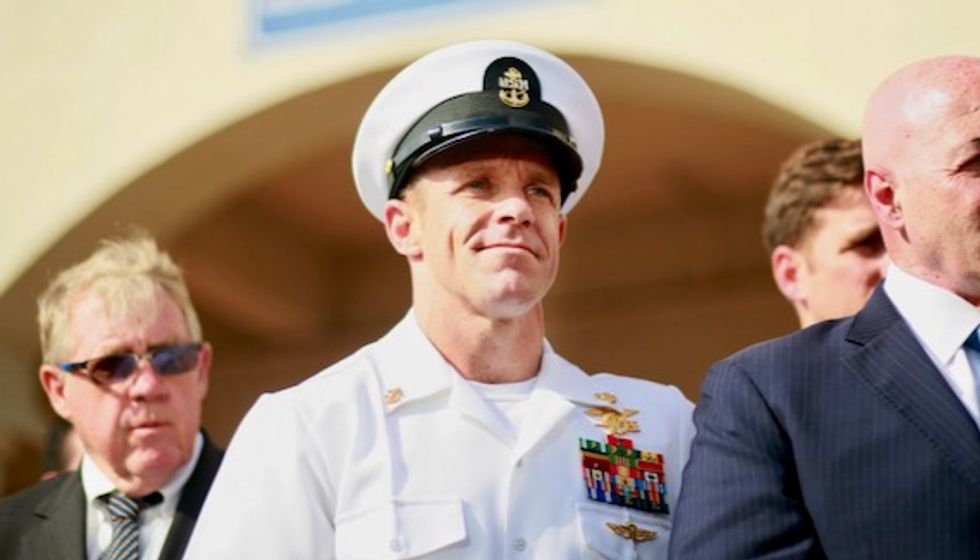 A decorated US Navy SEAL was found not guilty Tuesday of murdering a captive teenage militant in Iraq, the most serious of the charges brought against him during a two-week war crimes trial in San Diego.

Edward Gallagher, 40, was likewise acquitted of two counts of attempted murder against Iraqi civilians, but was convicted of posing for a photograph beside the corpse of the captive Islamic State (IS) group fighter.

The maximum sentence he could face is four months imprisonment, meaning he is set to walk free following Tuesday's verdict on account of the nine months he has already served in pre-trial confinement.

The prosecution's case was dealt a major blow when a witness said that it was he, not Gallagher, who had put an end to the captive IS militant's life.

Corey Scott, a first class petty officer, testified that while he had seen Gallagher stab the wounded fighter in the neck in May 2017, he had killed the boy afterwards.

He testified that he covered the victim's breathing tube with his thumb and then watched him die.

Scott said he did so to spare the boy -- who prosecutors say was about 15 years old -- from suffering or being tortured by Iraqi forces.

Scott, who was given immunity from prosecution, acknowledged during questioning that he made the revelation to spare Gallagher, who is married and has children, from going to prison.

Prosecutors argued Scott's version of events was a fabrication and that he was lying to protect Gallagher.

Gallagher's case proved divisive in the US, where he is viewed as a war hero by some.

His cause was championed by around 40 Republican members of Congress, as well as the right-wing Fox News channel.

President Donald Trump in May expressed concern over the prosecution of US soldiers accused of war crimes, with Gallagher reportedly among those he was considering granting pardons.

The charges against Gallagher stemmed from allegations by men under his own command in the US Navy's premier special operations forces.

They were among American troops deployed to Mosul, in northern Iraq, alongside Iraqi forces battling IS for control of the country's second city.

According to court documents, some members of the "Alpha" platoon were so horrified by Gallagher's behavior that they tampered with his sniper rifle and fired warning shots to scare civilians away before he had time to open fire on them.

They told investigators that Gallagher, who began his career as a medic, would brag about the number of people he had killed.

One platoon mate said he saw Gallagher fatally stab the teenage IS militant. Gallagher then allegedly posed with the boy's body for photographs and texted the pictures to fellow SEALs.

"Good story behind this one," one text message read, according to prosecutors. "Got him with my hunting knife."

When some of the other SEALs expressed reservations over the killing, prosecutors said Gallagher's response was: "I thought everyone would be cool with it. Next time it happens, I'll do it somewhere where you can't see."