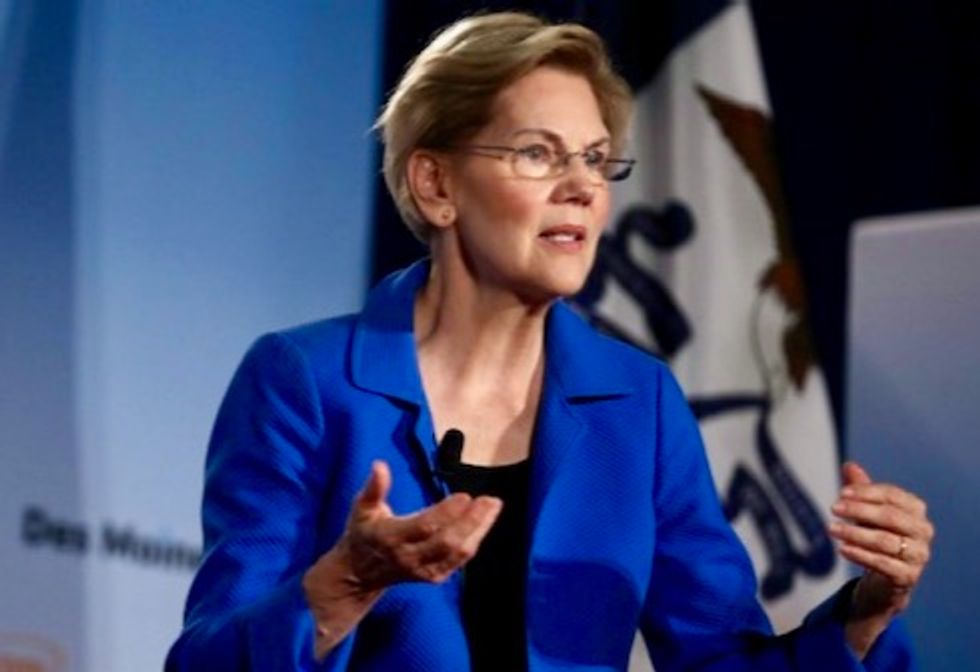 Democratic presidential hopeful warns of "a number of serious shocks on the horizon that could cause our economy's shaky foundation to crumble."

The Democratic presidential contender outlined the reasons for her concerns and plans to address them in a Medium post entitled "The Coming Economic Crash—And How to Stop It."

As she did in the years leading up to the 2008 economic crisis, Warren now sees "a lot to worry about again." According to the Massachusetts Democrat, there are "a number of serious shocks on the horizon that could cause our economy's shaky foundation to crumble."

"The country's economic foundation is fragile. A single shock could bring it all down," she wrote. "And the Trump administration's reckless behavior is increasing the odds of just such a shock."

Among the potential triggers she laid out is the level of household debt. Warren referenced recent data showing that household debt is now $869 billion higher than the $12.68 trillion peak it hit in 2008.

To remedy that, she cued up several of her already-released plans, including raising the minimum wage to $15 an hour, canceling most student loan debts, offering free public higher education, and making child care affordable.

She also called on federal regulators to swiftly address the potential shock that lies in leveraged corporate lending. "Leveraged lending—lending to companies that are already seriously in debt—has jumped by 40 percent since Trump took office, spreading 'systemic risk' throughout our financial system," wrote Warren.

Federal regulators, she wrote, should "enforce leveraged lending guidance that is intended to stop banks from issuing these risky loans in the first place."

Warren also cited the current manufacturing recessions—a problem she said could be flipped by enacting her Green Manufacturing Plan.

Inoculating the economy from "potential shocks" also will happen by "strengthening critical American industries, instead of undercutting American companies" and eliminating the debt ceiling, she wrote.

A crisis could be averted, wrote Warren, "if we take bold action now to address the underlying problems in the economy."

Warren's new plan rollout came the same day as Democracy for America's latest straw poll showedher closing in on Bernie Sanders's lead among the progressive group. The Vermont senator notched just over 32 percent to Warren's roughly 26 percent, both well ahead of third place Kamala Harris's 12 percent. The group's previous survey in April showed Sanders as the frontrunner and with a 30-point lead over Warren.