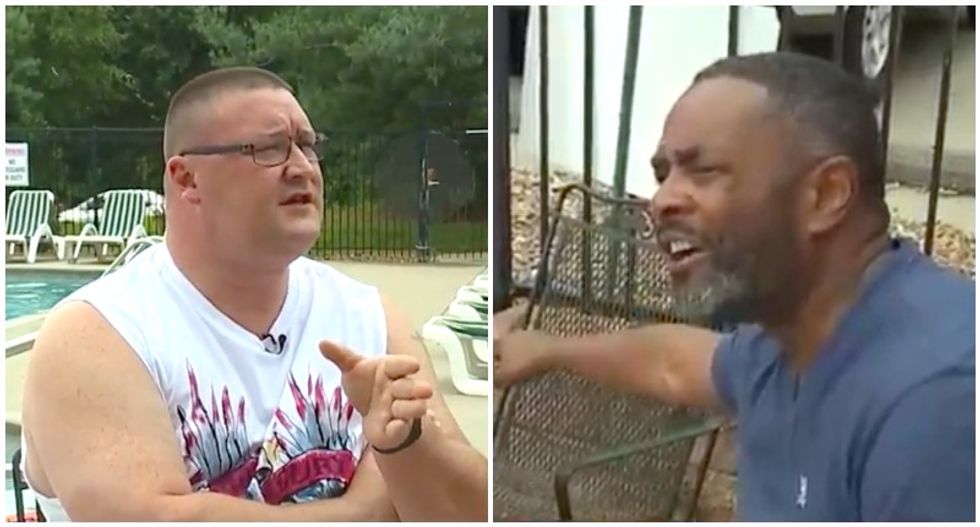 Two men were caught on video ranting at a group of black teenagers in Missouri who wanted to enjoy the neighborhood pool.

Cell phone video posted on Facebook shows the men accusing the teens of a recent string of vandalism and questioning whether they should be allowed to use the pool at a Lee's Summit subdivision, reported KSHB-TV.

"That doesn’t mean you invite all your young friends in my pool,” one of the men says in the video. "You pay the (expletive) dues?"

"We have to pay for all the (expletive) you guys do," the man later says, suggesting the teens are to blame for property damage.

The men told the teenagers that residents may bring only one guest to the pool, but posted rules say three guests per household are allowed.

The father of one of the teens said his 18-year-old daughter and one of her friends who also lives in the neighborhood were part of the group of eight teenagers -- which works out to three guests for each resident.

"This is not acceptable," said father Jeff Sallis. "There’s no reason for a grown man, two grown men actually, to engage in the manner that they did with a bunch of young teenagers."

Sallis has lived at the Ashton at Charleston Park subdivision for 14 years, and he's certain the men were angry at the teens because they're black.

"I’m absolutely sure race played a factor here," Sallis said, "because again when you look at the video the way the gentleman postured himself and the things, he was saying, 'They probably don’t even live here, this is my pool. You don’t belong here.' It was a lot of you, you, you."

One of the men shown in the video, Bobby Ross, later spoke to the TV station to give his side of the story and apologize for his behavior.

"I shouldn't have gone off the deep end like I did,” Ross said. “The language I used was inappropriate, and I apologized to all the kids, the other gentleman that was involved. I lost it because the way I was spoken to.”

While Ross was speaking to the reporter, Sallis unexpectedly showed up at the pool and confronted him.

"Excuse me, excuse me -- this is my time," Ross told Sallis.

"You did your talking the other night," Sallis replied.

Ross denied that he had confronted the teens because they were black.

"It had nothing to do with race,” Ross insisted. “So, you can take it to that direction if you want to. It wasn't that. It was me questioning kids that were hopping the pool fence and not supposed to be here.”

The men eventually shook hands and apologized to one another, and Ross agreed to apologize to Sallis' daughter.