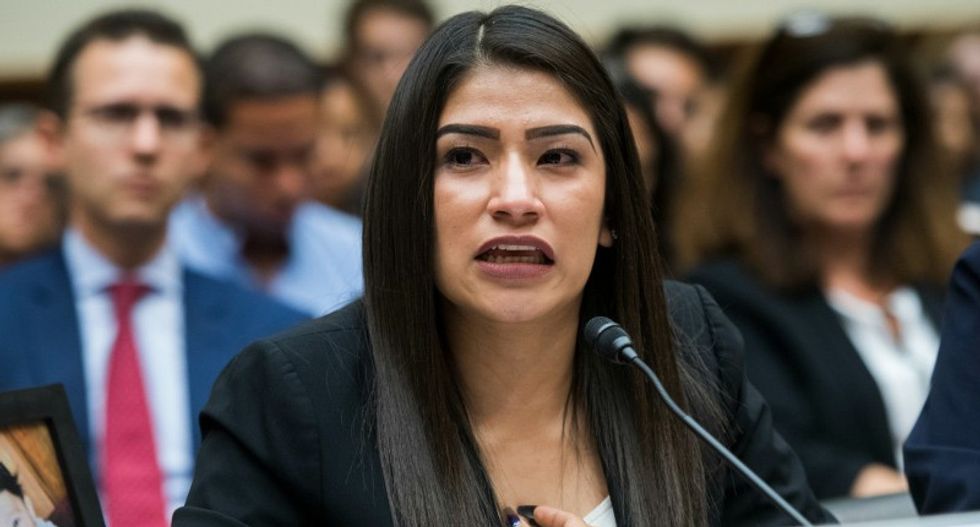 "I'm here today because I don't want another little angel to suffer like my Mariee. I don't want other mothers and fathers to lose their children."

During a House Oversight Committee hearing Wednesday titled "Kids in Cages: Inhumane Treatment at the Border," the mother of a 19-month-old girl who died shortly after becoming sick in ICE custody delivered heartbreaking testimony on the horrific and abusive conditions inside the Trump administration's detention centers.

"I am here because the world should know what is happening to so many children inside of ICE detention."

—Yazmin JuárezYazmin Juárez explained how her and her young daughter Mariee fled violence in their home country of Guatemala in 2018, seeking safety and asylum in the United States.

"So, we came to America, where I hoped to build a better, safer life for us," Juárez said. "That did not happen. Instead, I watched my baby girl die–slowly and painfully—a few months before her second birthday."

Juárez said Mariee became seriously ill after arriving at an overcrowded ICE detention facility in Dilley, Texas, where "no effort was made to separate the sick from the healthy."

It didn't have to be like this. Mariee was a healthy baby girl when she was taken into ICE custody. But 20 days later, she left with a life-threatening infection. Small children do not belong in detention.

But if ICE's detention center had just been safe and sanitary—and if they'd given my daughter the proper medical care she needed—Mariee might still be here today, preparing to celebrate her third birthday in August. Instead, my daughter is gone. The people who run these facilities are supposed to take care of these children—little angels who have done nothing wrong. Most of the children are brought here by parents seeking a better, safer life for them.

"I'm here today because I don't want another little angel to suffer like my Mariee," Juárez concluded. "I don't want other mothers and fathers to lose their children. It can't be that hard in this great country to make sure that the little children you lock up don't die from abuse and neglect."

"The world should know what is happening to so many children inside of ICE detention. My beautiful girl is gone, bu… https://t.co/SyWnLdRS2G
— CAP Action (@CAP Action)1562787969.0

Juárez's testimony, which comes amid a torrent of news reports and first-hand accounts of conditions at Trump's detention facilities, brought lawmakers to tears.

Rep. Alexandria Ocasio-Cortez (D-N.Y.), who was visibly moved by Juárez's story, said "what is being pointed to here is a culture of cruelty" after Juárez recalled that a Customs and Border Protection officer told her "this country is for Americans, Trump is my president, and we can take your little girl away from you and lock you in jail."

"To have a CBP officer tell a migrant woman escaping unspeakable horrors in her home country, and tell them this country is for Americans, and to threaten separating her from her daughter, to threaten a human rights violation, is extraordinarily concerning," said Ocasio-Cortez, "and at a bare minimum grounds for serious investigation by this committee and other entities."