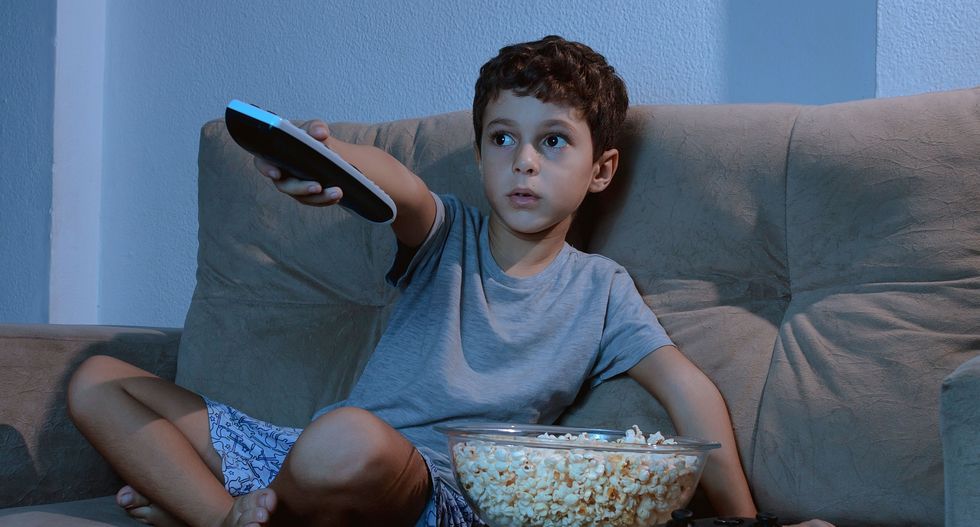 "Today's decision by the FCC will be remembered as one in which the commission's three GOP members embodied the worst qualities of Dickens' Ebenezer Scrooge."

The Federal Communications Commission (FCC) was accused on Wednesday of sacrificing  children's "education and well-being all for corporate profit" after it weakened television programing rules.

The new order, framed by the agency as "modernizing" the decades-old broadcast rules, passed along party lines with the three Republican commissioners approving and the two Democrats dissenting.

That leeway means the content can be booted away from a channel's main viewership to secondary stations, which allows the channels to focus more on monetizing—exactly what they had wanted.

While Democratic commissioner Jessica Rosenworcel noted the changes in the media landscape since the Children's Television Act, on which the rules were based, was enacted—"many of us can call up a range of kid-focused content when we want it and where we want it," she said— she also said the internet age doesn't mean the FCC  should have license to slash the rules.

In her dissenting statement, she explained, in part:

We have a digital divide in this country. Broadband is not available everywhere. Our own statistics show that millions and millions of households have no access to the internet. That includes a quarter of the low-income households with children under 8 at home. Some of them live in rural areas, some of them simply cannot afford it. Remember that 8 in 10 Americans live paycheck to paycheck, many of them with young children in their homes. On top of that, many Americans who can afford this service have limitations—like data caps that prevent them from watching much video on their screens.

Plus, that internet viewing comes with its own problems. While there is quality content to be found, a whole lot of videos aimed at children are not so enriching and may be collecting information about the kids who are watching. In fact, our colleagues at the Federal Trade Commission are now investigating how online video providers may be violating the privacy of children. This follows on the heels of reports that automated recommendation systems can promote disturbing images of young children, rolling on the screen, one after another. I know, as a mother, I am not at ease when my kids sit down before the computer and rely on algorithms to deliver their next video. There is so much that is new and not easy to navigate as a parent in the digital age.

She also took to Twitter to express her criticism:

Simply put, said the Parents Television Council, the changes "have placed the financial interests of billion dollar broadcast corporations ahead of the educational and informational needs of America's youth."

Adding to the chorus was Sen. Edward J. Markey (D-Mass.), who authored the Children's Television Act.

"Thanks to strong children's television rules, kids of all background have for years accessed the nourishing programming that they need to thrive and grow," he said. "In an era in which children increasingly come in contact with low-quality, inappropriate, and even harmful content, these rules have ensured children, especially in low-income and minority communities, have access to enriching and educational shows."

"Today's FCC decision," he continued, "sacrifices children's education and well-being all for corporate profit under the guise of flexibility. Promoting the public good and serving kids should not fall by the wayside for the sake of increased business revenue. While the Commission’s final rule change did not completely dismantle children’s television as originally proposed, it clearly put the interests of companies ahead of our kids. Low-income and minority communities will be hit the hardest by these changes as children in these families disproportionately rely on broadcast television."

While the FCC is looking at further gutting the mandate, weighing whether "broadcasters could satisfy their children's programming obligations by relying, in part, on efforts to sponsor children's programming aired on other in-market stations," Jeff Chester, executive director of the Center for Digital Democracy, suggests consumers should put pressure on lawmakers.

"Congress must step in and enact a new law that requires TV stations, cable systems, and streaming video providers to offer a wide range of quality content for children. Such programming should be free—and not behind paywalls," he said.

"In the meantime," continued Chester, "today's decision by the FCC will be remembered as one in which the commission's three GOP members embodied the worst qualities of Dickens' Ebenezer Scrooge."