White woman has a racist meltdown after hearing someone speak Spanish: 'I hope Trump deports you!' 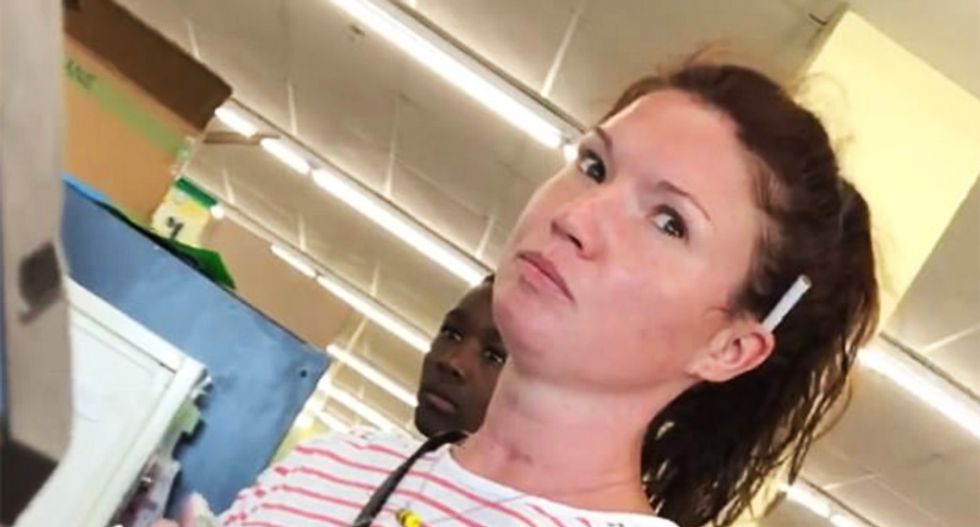 A white woman was captured on video snapping at a Puerto Rican woman at a Pennsylvania market for speaking in Spanish, telling her "I hope Trump deports you," reports NBC Philadelphia.

According to Johanny Santana, she was standing in line at the Abington market when the unidentified woman made her threat after saying Santana was making her purchase with "drug money." Santana said the altercation had its genesis when a child spoke Spanish to the cashier while shopping with his grandfather.

Santana noted that it was a different woman who first swore at the child, saying, "The boy comes back and asks another question to the cashier and that's when the woman, who was next to me, started cursing."

She explained that she had just started filming when the woman who made the threat and verbally attacked her and, when she responded, shot back: "Can you stop talking to me?"

"I was born here, you don't belong here ... go back to your own country," Santana is told, with the white woman adding, "You don't belong here, you came here illegally. You should be deported...I hope Trump deports you," before calling her a "b*tch" using a Spanish slur.

The Buffalo mass shooting in which Black people specifically were targeted is just the latest example of racist-inspired hate crimes that plague the United States.

As reported by CNN on Monday, a study from the Anti-Defamation League revealed that white supremacists were responsible for more murders than any other political extremists last year, and they account for 55 percent of extremist murders in the past 10 years.

A new statue of Britain's late former prime minister Margaret Thatcher was fenced off on Monday following an egg-throwing protest shortly after it was installed in her hometown.

The Conservative prime minister known as the Iron Lady led the country from 1979 to 1990 and was the first British female premier.