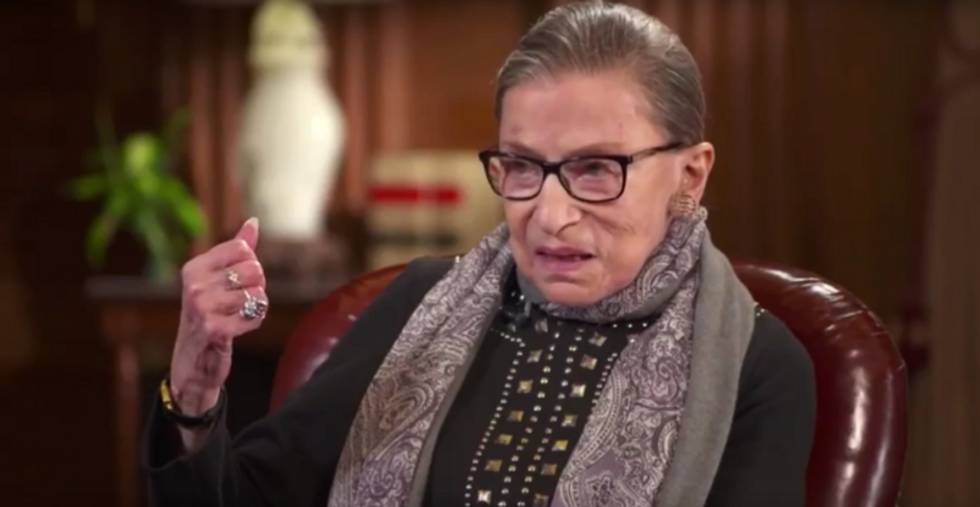 Supreme Court Justice Ruth Bader Ginsburg on Tuesday applauded fellow Justice Brett Kavanaugh — whose confirmation process was marked by allegations of sexual assault — by remarking that her newest colleague’s hiring of four women law clerks means that more than half of the Supreme Court's law clerks will be women for the first time in U.S. history.

"There is a very important first on the Supreme Court this term, and it's thanks to our new justice, Justice Kavanaugh, whose entire staff is all women. All of his law clerks are women," she said on Tuesday while speaking to a packed auditorium at Georgetown University's Law School. "And with his four women as law clerks, it's the first time in the history of the United States that there have been more women clerking at the court than men."

Ginsburg made history herself, becoming only the second woman to be confirmed to the nation's highest court in 1993 after being appointed by President Bill Clinton.

She leads the court's liberal wing and is widely considered a trailblazer in advocating for gender equality. When he nominated her to the court, Clinton compared her legal work to promote women's rights to the work of former Justice Thurgood Marshall's on behalf of African Americans.

She spoke on Tuesday about the challenges of landing a job after her graduation from Columbia Law School in 1959 because she was a mother. She revealed that a professor threatened that he would never recommend another Columbia Law student to a clerkship at the Southern District of New York if he did not provide Ginsburg with the job.

She also reflected on her own legacy in the fight for gender equality, pointing out that while many of the "explicit barriers" women faced in the 1970s are largely gone, many still have to combat "unconscious bias."

Ginsburg has become a pop culture icon and a kind of progressive superhero, known in some circles as "The Great Dissenter" for her withering dissents on the Supreme Court, and in others as "Notorious RBG," in reference to the rapper Notorious B.I.G., another Brooklyn legend. Ginsburg's face has adorned scores of t-shirts, pins and memorabilia alongside the "Notorious RBG" slogan — even some audience members on Tuesday could be seen wearing Ginsburg-inspired apparel.

The justice on Tuesday also revealed the "secret" to her long and famously equitable — and thus, at the time, unusual — marriage with prominent lawyer Martin Ginsburg, who she called "extraordinary."

"It was lucky that I met Marty at a time when the best degree that a girl could have not her BA or her JD, it was her M-R-S," Ginsburg said.

Ginsburg noted that while she and her husband, who died at 78 years old in June 2010, divided household chores equitably, she said each took on the brunt of the housework and child rearing when the other was pursuing a key goal, such as when her husband worked to become a partner at his law firm.

"Then it switched when the women's movement came alive at the end of the '60s, and Marty realized that what I was doing was very important," Ginsburg said.

She recalled how on her wedding day, her mother-in-law took her aside and advised her that the key to a happy marriage was that "sometimes, it helps to be a little deaf."

"It was excellent advice for the two law faculties on which I served — the D.C. circuit and even today at the Supreme Court," the justice added.

Ginsburg called her husband her "biggest booster" and said he never considered her successful law career as a "threat."

"Marty was the most unusual fellow," she said. "I've said many times he was the only boy I ever knew up to that time who cared that I had a brain."