With one line, Elizabeth Warren effectively ends what was left of John Delaney's campaign 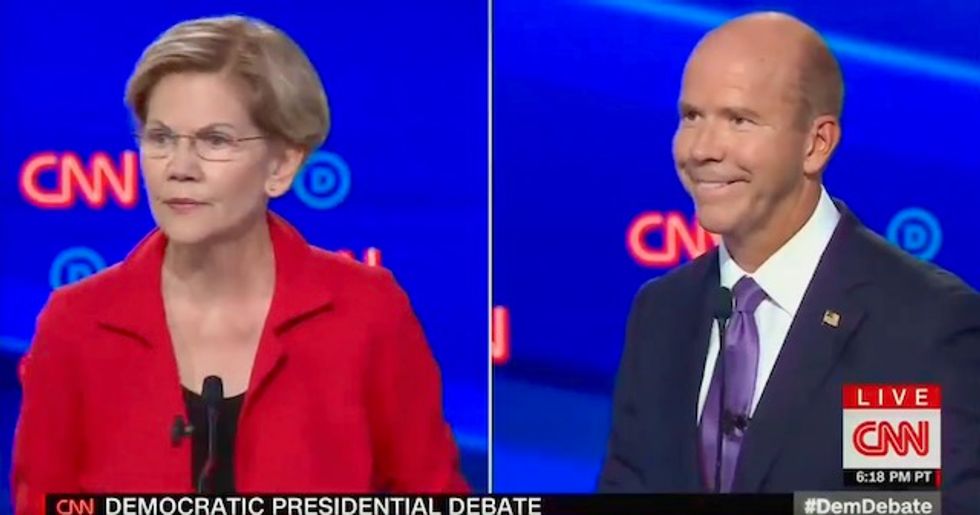 "Extremely rude of Elizabeth Warren to murder John Delaney on national television like this."

In one line during Tuesday's CNN Democratic primary debate, Sen. Elizabeth Warren made a distinction between her vision of the Democratic Party and that of her more conservative opponents.

Replying to former John Delaney, a former congressman from Maryland polling at around one percent who has made opposing left-leaning policy ideas the centerpiece of his quixotic run for the nomination, Warren wondered aloud what use it was trying to lead the American people without a vision.

"You know, I don't understand why anybody goes to all the trouble of running for president of the United States just to talk about what we really can't do and shouldn't fight for," said the Massachusetts Democrat.

A split screen showed Delaney with a large, but awkward, smile.

Elizabeth Warren: "I don't understand why anybody goes to all the trouble of running for president of the United St… https://t.co/UOl8gkcd0r
— Keith Boykin (@Keith Boykin) 1564536438.0

Warren has based her primary campaign on a list of policy ideas backed up with detailed proposals: "I've got a plan for that" has become a mantra of sorts for the senator's presidential campaign.

Delaney, on the other hand, has struggled to gain traction with voters and has stuck mostly to attacking the candidates to his left for their plans to expand Medicare and tackle the climate crisis.

"Gotta say though, I'm really loving watching Delaney get pummeled by Sanders and Warren," said @non_bona_dicta, "they're burying the motherfucker."

After the applause from her one-line cutdown of Delaney died down, Warren made clear that the real issue at hand was a corrupt political system that, along with corporations, is taking the government and "holding it by the throat."

"We need to have the courage to fight back against them," said Warren. "Until we're ready to do that, it's just more of the same."